Devastating Alban Berg Wozzeck at the Royal Opera House (2013). I took my (adult) son for a "youth perspective". When we left, he was in a turmoil. "But that's because it was such a good opera", he said, "You can't walk out of that and not be affected".  He got Wozzeck the way Berg would have approved. As Berg himself said, "No one in the audience...... gives any heed to anything but the vast social implications of the work which transcend by far the personal destiny of Wozzeck".

Wozzeck is a stunning Total Work of Art. Those long chords that blast out as Wozzeck dies are  ferocious howls of protest,  timpani pounding the message home. It is NOT right that  people should be humiliated and misused. The Doctor gets pleasure from hurting people, even his erstwhile friend the Captain. "Wozzeck is nuts but at least he's moral", said my son, "but the Doctor is evil, and gets away with it because no-one stands up to him". This opera is so tightly structured that themes interlock and intertwine, moving, as my son said, "like a giant Rubik's Cube". The production, by Keith Warner, with designs by Stefanos Lazaridis, is exceptionally close to the music and meaning  Every detail connects to something in the score. It's an astonishingly perceptive realization. When Wozzeck crawls into the tank and dies, he floats like one of The Doctor's gruesome specimens (incidentally connected to infants and women's diseases). He looks like a foetus in its amniotic sac.

Throughout the opera, the Child (Sebastien Wright) has been a passive observer. "Just like Asbo kids on sink estates", said my son. "No-one gives a darn what they see". He noticed how The Doctor peers like a voyeur as Marie and the Drum Major fool about, brutally. "But Wozzeck", said my son, "He's the only one who thinks it's wrong to let kids see such things". Wozzeck ties the kid to his bed so he won't follow. But the child breaks free, of his own will, and contemplates Wozzeck's corpse. Marie fought back, too. Her own father didn't dare belt her when she reached ten. What do we think when we see her watch what's happened to Wozzeck? Immerzu, immerzu? Or have we learned something in the process? Read a few more of my comments on the staging here and Claire Seymour's review in Opera Today, to follow.

Mark Elder conducted. In 2002, Antonio Pappano gave a Romantic reading, not entirely inappropriate.  In 2006, Daniel Harding nailed the music more idiomatically, with an electrifying mix of passion and horror. Elder is between the two, probably more palatable to people coming new to Alban Berg and scared of modernity, which is perfectly valid. I enjoyed this a lot orchestrally but was less enthused by the uneven quality of the singing. 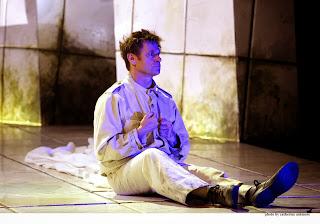 This present revival boasts an all-star cast, with Simon Keenlyside, Karita Mattila and John Tomlinson, guaranteeing box office success. Wozzeck, however, isn't a star vehicle opera. It's so tightly integrated that  you can't  isolate the singing in the way that you might in, say, Rossini, where arias are interchangeable. Everything predicates on drama and meaning. The values of conventional,opera do not necessarily apply. Less glamour and more gutsiness, perhaps?

Simon Keenlyside has done many Wozzecks, and is technically strong (and physically, too). But he's so elegant and gentlemanly that he doesn't really do the lowdown and dirty, feral side of Wozzeck's personality, Wozzeck's almost more beast than man until after Marie's murder. Suddenly he becomes articulate (though still inept), and starts to reason rather than simply react. Then, Keenlyside's virtues came into play, and he sang in perfect character.

Karita Mattila had divine high notes for "Heiland!" in the scene where she prays. But Marie is rough trade and Mattila is a diva, in the best sense of the word.  Even more so than Keenlyside, Mattila is too  ladylike to get to grips with Marie's animalistic side. Katarina Dalayman, in 2002, created a vibrant, pugnacious and decidedly sexual Marie. Mattila is too poised, and self-aware. John Tomlinson's Doctor was unsteady, his performance redeemed by his acting, and the role itself, which is a tour de force even greater than Wozzeck's. Arguably, though, The Doctor could sound dehydrated. Tomlinson convinced because he showed how the Doctor's soul had shrivelled, cut off from the refreshing life force that keeps the peasants and soldiers going,  Gerhard Seigel and Endrik Wottrich were excellent, but the Captain and Drum Major cannot hold the show. Perhaps the problem was an approach that was too close to operatic mores. Sprechstimme, for example, deconstructs the idea of"good singing"  In Wozzeck it helps create surreal alienation. When it's muted, the impact's lost.

The Royal Opera House choruses are usually superlative, but they could have been less refined and more raucuous. Their folk songs are the embodiment in music of the life force which the Doctor wants to sterilize. Like the Narr (Robin Tritschler) the ditties might sound dotty but they serve an important dramatic function.  Marie and her friends and the dancers in the inn are sustained by their link to a more primitive form of expression. .

But who am I to quibble? As my son said, "Who cares if the singing isn't perfect? It's only part of the story. This opera is fantastic. It works as a whole package". Words of wisdom.