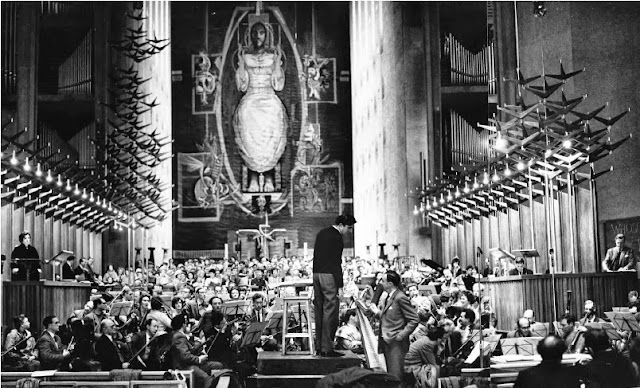 Benjamin Britten's War Requiem was such an important event that thousands listened to the broadcast of its premiere on 30th May 1962 : it's hard to imagine modern audiences so drawn to new, classical music today. For many who listened, it was life-changing. A friend of mine recalls tuning in, not expecting anything special, and was wonder struck. Just as everyone remembers where they were when they heard the news of John F Kennedy's assassination - also on 22nd November - Britten's 50th birthday - classical music people remember first hearing Britten's War Requiem. For my review of the fantastic BBC Prom War Requiem (Nelsons, CBSO) see here.

Now we have a chance to see the rare film of the first BBC TV broadcast, first transmitted in August 1964, from the Proms at the Royal Albert Hall. Britten himself conducts the small ensemble, the Melos Ensemble.  The BBC Symphony Orchestra is conducted by someone who looks like John Barbirolli but is Meredith Davies. The soloists are Heather Harper, Peter Pears and Thomas Helmsley. Simon Preston plays the  RAH organ. Also featured are the BBC Chorus and Choral Society, Boys from Emanuel School, the  London Philharmonic Choir.. Kennedy's assassination must have been fresh in the minds of the performers and the audience : the world seemed a smaller, more Anglophone place then. This time, Londoners filled the Royal Albert Hall : their experience of the Blitz was more prolonged and more damaging than in Coventry.

Watching this film, I'm struck by how formal the performers appear. "Stiff upper lip", and cut-glass accents which would seem unnatural today. Watch Peter Pears' body language though. His face turns red with intensity, his chin jutting forwards, his mouth snapping as if he were firing ammunition. He came from a military family : his older brother was a POW in Hong Kong. For a man of that background, it took courage and serious conviction to become a conscientious objector. When he sings the "Strange Friend" sequence, he sings with powerful dignity.

Watch Britten's conducting style - understated and minimal, while the other conductor leaps and waves his arms. Evidence yet again, of the significance of the chamber orchestra and the fundamental duality that runs through so much of Britten's music. Miss these subtle contradictions, and miss the true heart, I think, of Britten. As Pears and Helmsley sing "Let us sleep" Britten shapes the music around it as delicately as if it were a bizarre lullaby.  The boys choir rings up from the gallery, uniting with the two soloists. Only then do the main choirs and orchestra and Harper join in.

The filming is definitely "old school" point and shoot. Fixed position cameras, with relatively limited angles. At times the camera will linger on musicians who haven't started tom play: the cameraman has been told where to film, when rather than follow the music.  At the end, the camera above Door 12 does a panorama of the stage and its hundreds of performers: quite magnificent, even in low resolution black and white. The camera over Door 9 pans briefly on the audience in the arena, some of whom are wearing ties in the heat of August.

This filming feels antique: things have certainly changed for the better! The BBC was in the forefront of the whole new approach to the art of filming music. The BBC and Britten were made for each other. I'll write more later about the BBC's radio broadcasts this week, but for now, look at the other TV offerings :

Britten's Endgame (Reviewed HERE)
Britten's Violin Concerto, one of the best Proms in 2013 reviewed HERE
Billy Budd from Glyndebourne (reviewed here)
Britten and Pears - private folksong recital, filmed 1964.  Good performance but the spoken introductions are sexist!
Benjamin Britten on Camera - this is much more important documentary than you'd expect as it deals with the relationship between Britten and the BBC and shows how each influenced the other