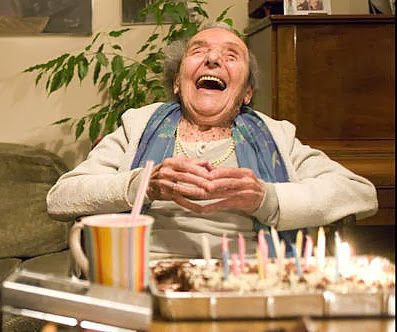 Alice Herz-Sommer, aged 110, died in hospital this morning. She was the world's oldest Holocaust survivor, the world's oldest pianist and many other things. Her life is remarkable in many ways but for me, especially because of her dynamic approach to life.  Born in Prague in 1903, she was a professional musician. When the Nazis came, she was shipped to Terezin (Theresienstadt) where she played in the notorious camp orchestra. Even then, she was unusual because she had a young son to live for. He made her laugh when he sang songs from Brundibar. To laugh, in a concentration camp?  But that sums up Alice's personality.  When she was "just" 97, she told Christopher Nupen in his film "We Want the Light" that her twin sister was a pessimist and  that "tension" shortened her life. "Nature and music, that is my religion" she says, her face lighting up radiantly. "I am grateful to my mother who wanted us to learn, to know, to be thankful for everything ..... seeing the sun, seeing a smile, hearing a nice word. Everything is a present to be thankful for".

"Life is a gift", she often said. "Hatred eats the soul of the hater, not that of the hated"   Alice is an inspiration, positive therapy in human form. She's had a tough life, but hasn't become bitter. "Music is God", she has said, "in difficult times you feel it most". Think of the famous quandary, is a glass half full or half empty? But the glass is always full. The other half is air, without which we cannot live. Drink it gratefully!  Some people, alas, get their kicks out of being miserable and inflicting it on everyone else. Not Alice!


It's not how long you live, some have said, but how well you have lived. Not in material terms, but in terms of what you've learned and given back to others. In that sense Alice will be immortal.
Once I met Anita Lasker-Wallfisch and told her how she inspired me."But I didn't do anything, I just survived", she said, which is an understatement, but utterly sincere. People take responsibility for themselves. Another camp inmate (also with a young son) told me about grass shoots emerging from the ground after a hard winter."We ate them" she said, totally matter-of-fact.

Email ThisBlogThis!Share to TwitterShare to FacebookShare to Pinterest
Labels: Theresienstadt