The worst of Britten and the best of Tippett?  English Touring Opera presents Benjamin Britten's Paul Bunyan with Michael Tippett's King Priam at the Linbury Theatre, Royal Opera House. HERE IS MY RE£VIEW OF PAUL BUNYAN. The combination is interesting on many levels. Ideally both operas should be considered in relationship with each other, though I don't really expect this to be done. But it's worth a thought because this combination doesn't often come around. ETO is most definitely to be admired for mounting this ambitious pairing.

Both operas employ large casts, but with relatively little depth of characterization, almost large oratorios more than opera in the usual sense.  Labels like "comic operetta" are meaningless in themselves unless analyzed. Paul Bunyan is whimsical but it in its own way it deals with isssues even more complex than Tippett addresses. In 1941, Britten was experimenting with a new kind of music theatre. Peter Grimes was just a few years away, but by then Britten has learned to use music to create personalities who feel authentic and involve us in their dilemmas. King Priam, written 1958/61, is shaped by the composer's need to express theoretical themes in the guise of narrative. Perhaps it's significant that Tippett's great masterpiece, Boyhood's End, grew from the connection between Tippett, Britten and Pears. The textual perambulations mesh well with Tippett's setting. It's a wonderful piece. Yet one wonders what Britten would have done with it, given that the subject would have been so dear to his heart.

Britten's Paul Bunyan is usually mounted as if it were a straightforward musical about America. But is that what it really is? Taking Britten (and Auden)  at face value,  prettified is never a good idea. Paul Bunyan is a curious beast. Sometimes it sounds like a parody of a Broadway musical, even less rugged than a prettified Hollywood western. The rhyming couplets are deliberately faux-naive. Britten is Tourist in the Redwoods.  He's not even attempting realism. America, or the idea of America symbolized by the Paul Bunyan myth, meant something different to him from the America that surrounded him when he went there in April 1939, before the outbreak of war, when Britons still believed that Chamberlain could hold Hitler at bay. Britten-haters use his sojourn in America to attack him for being unpatriotic, ignoring the fact that he returned at some danger to himself and joined the war effort in other ways than by fighting. So what was Britten searching for when he went to America? 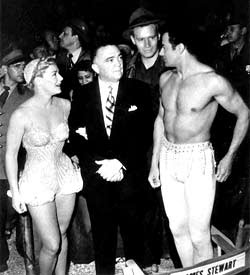 Far from writing a hymn to Americana, in Paul Bunyan Britten engaged with the ideal of America as Arcadia, knowing full well that ideals often don't work out in reality. The "brave new world" he was hoping to find turned out to be just as crass as the Europe he'd left. Britten knew about McCarthy and the purge of Un-American intellectuals. Some years ago Donald Mitchell, the eminent Britten scholar, was doing some research under the Freedom of Information Act and came across a letter signed by J Edgar Hoover himself in 1942 condemning Peter Pears, and another from 1967 condemning Britten. In both cases, the "evidence" is heavily blacked out. "A strange footnote", writes Mitchell, "a rare insight into a disreputable feature of 20th century politics in America and nearer home".Indeed, Peter Grimes clearly deals with the persecution of individuals by a mob of repressed conformists desperate to impose their paranoia on what they don't understand.

So the clumsiness of some of the musical writing in Paul Bunyan is in fact artistic licence. Parts of the piece sound corny because what they depict is corniness. Like Peter Grimes, Paul Bunyan and Babe are too big for their boots in a world where pettiness rules. Paul Bunyan is a stylized vision of  "a Forest, full of Innocent Beasts. There are none who blush at the memory of an Ancient Farm, None who hide beneath dyed fabrics a Malicious Art ".

"It is a Spring morning without benefit of young persons. It is a sky that has never registered weeping or rebellion.............It is America. But Not Yet.

WANTED: Disturbers of Public Order,. men without foresight or fear

WANTED:  Energetic Madmen, those who have Thought Themselves a body large enough to devour their dreams

WANTED: The Lost, those Indestructibles whom Defeat can never Change. Poets of the Bottle, Clergymen of a Ridiculous Gospel, Actors who should have been Engineers, and Lawyers who should have been Sea Captains. Saints of Circumstance, Desperados, and Unsuccessful Wanderers and all who can hear The Invitation of The Earth. America, youngest of her daughters, awaits the Barbarians in marriage"

The words ring out with the false theatricality of a "Wanted" poster in the Wild West. The words are framed by a woodwind melody that might evoke birdsong in a virgin forest. But note its sour tone. This is no Wood Dove. Britten's Paul Bunyan may not know fear but he's no Siegfried.