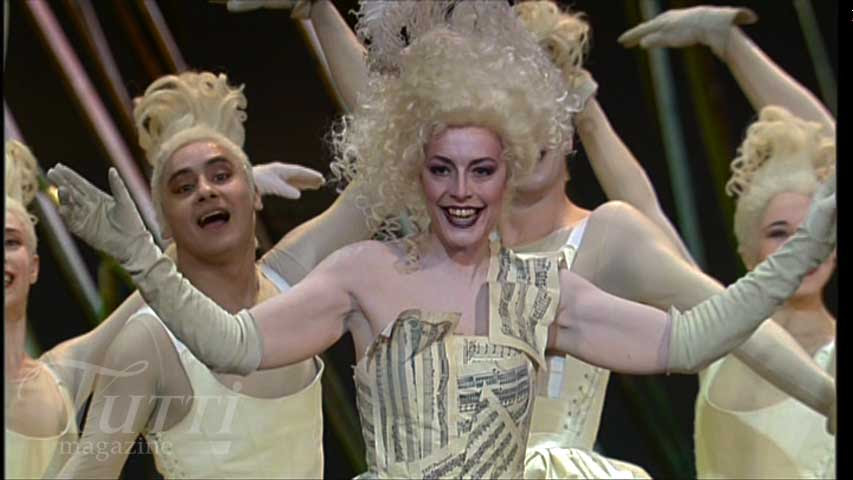 As the opening credits for the classic Laurent Pelly production of Jean-Philippe Rameau's Platée roll, we hear Marc Minkowski conduct Les Musiciens du Louvre-Grenoble over a  shot of an elegant French palace. But wait! We hear the sounds of frogs croaking : the tumult almost but not quite shatters the poise of the orchestra. But that's exactly what Platée represents.(Details of Paul Agnew conducting Platée in London are here).

Rameau wrote Platée to entertain Louis XV and his court on the occasion of the Dauphin's marriage in 1745. The bride was a Spanish Infanta, but she was ugly. Platée is a frog whose realm is a pond in the wilds, the opposite of refined, elegant Versailles. But she/he has pretensions: she/he thinks everyone she meets will fall in  love with her. The part was written for a travesti, a man pretending to be a woman, which makes the satire rather cruel. As it happened, the princess died very young and the prince never became king. Yet given what we know of Rameau and the way he had to court the rich, perhaps the laughs are ultimately on the Gods and their abuse of power.

Laurent Pelly's production, (from 2002) uses a set, designed by Chantal Thomas to show the long Prologue in a theatre. Usherettes show members of the chorus to their seats but within minutes, order descends into relative chaos. the chorus members bounce up and down and swap places, "dancing" rather than staying put as they should. Study the detail in the movements, which replicate the liveliness in the music. Indeed, at times the horizontals of the set resemble manuscript paper and the chorus members notation. Rameau's music and precise dance figures come alive! Thespis, Momus and Thalie, the muses of satire, are exhausted after a night of drunken carousing, but the chorus wants a show. . The Gods Jupiter (Vincent Le Texier) and Mercury (Yann Beuron) appear in (almost) plain clothes - more like mortals with problmes than all-powerful beings like the rulers of the House of Bourbon. Jupiter is the king of the Gods but his wife Juno is giving him strife, so he and Mercury concoct a cruel plan. Knowing that Platée is desperate for love, Jupiter pretends he wants to marry her.  But Paul Agnew's Platée the Nymph  is a creation of genius. The costume's brilliant: Agnew's masculine muscles look hilariously awkward with his pink water lily tutu. Incredibly good acting - every gesture frog-like and grotesque, yet painfully poignant. He jumps clumsily instead of dancing. Plateée is an amphibian out of his/her natural element, easy prey for the cynical Gods. Trumpets usher in formal, courtly music,  but the chorus are lit with green light,, with big google eyes: a chorus as one can hear at nightfall. A storm is brewing. Wonderful divertissements, choreographed with meticulous attention to the music. Drums roll. Jupiter descends from the heavens in a giant chandelier.  "Aquilons, trop audacieux, craignez ma colère". Don't mess with me,  you uppity water creatures! A stunning coup of theatre that would have the snobs at Versailles cackling with delight. 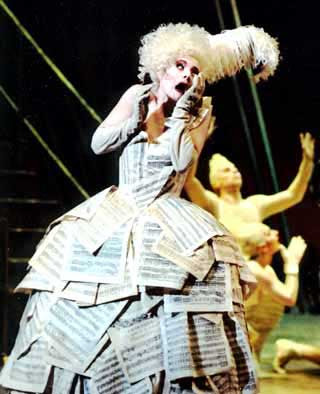 Rameau's music for Platée subverts the grandeur, however. "Qoui, qoui, qoui," he/she sings, "venez, venez, venez". Short squat flurries, not elegant legato. Mad cacophony from the woodwinds. Jupiter, now disguised as the "Hibou" in the text, covers his ears in disgust. Fireworks spew from Jupiter's hands, and La Folie appears, a vision of sparkling white, a glorious contrast to the grubbiness around her. Mireille Delunsch looks divine; madness purer and clearer than godliness. Her dress, significantly, is made from scraps of musical manuscript. at one stage she pulls bits off to "sing" them. This is a masterful stroke of theatre, extravagant in the audacious Baroque style, yet also pertinent to meaning. More wonderfully choreographed passages of male ballerinas en deshabillé. Delunsch walks towards the orchestra and "conducts" before launching into an extended display of maddeningly florid trills and rapid fire decoration. "L'amour est cruel quand il est outragé!". Her music then becomes plaintive "funebres,  underpinned by a menacing drone from the orchestra. A mournful dance for a wedding ? "Je veux finir par un coup de génie, ...Je sens que je puis parvenir au chef-d'oeuvre de la harmonie". Sure enough, harps are plucked solemnly and the nuptial ensemble join in harmony, starting with "Hymen, Hymen" and descending into a more ironic "Bon, bon, bon". 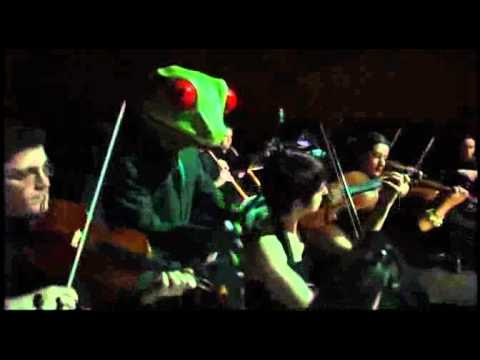 The Third Act begins when a figure with a colourful,  realistic frog head appears in a box above the stage, giving Minkowski the cue to start conducting. The frog enters the pitch and snatches the baton with a flourish at the exact moment the overture ends. The frog has been glimpsed before, observing proceedings. Now it's becoming part of the action. More dancing, as was de rigueur in celebrations like this, but the guests have been partaking of Bacchus, and their inhibitions relax. Cupid pops by, and the Three graces, all in underwear, as Platée begins to twig that perhaps love isn't all it's cracked up to be. When he/she spots The Frog among the guests, she greets him with a warm embrace. He hands her a bouquet of wild water lilies. Just as the wedding is about to take place, Juno (Doris Lamprecht) storms in to stop proceedings. The wedding guests drag Platée mercilessly on the ground. "Chantons, Platée, égayons nous". But Platée isn't fooled any more. Vivid exchange where she/he argues with Clitheron (Laurent Naouri) the satyr who set her up right at the beginning "Moi, Qui? Moi" "Toi, Oui, Toi" Then Platée sings, rather than imitates a croak, and jumps back into his/her pond.

Medici tv is screening this Platée from the Palais Garnier 2002, as part of its year-long tribute to Rameau. It is a timely reminder that the Baroque era embraced adventure, and French baroque in particular was fun and energetic. Rameau himself was an innovator and also something of a misfit in the upper echelons of the aristocracy.  So enjoy this Platée and the wonderful performances within, and appreciate its verve and intelligence. Pelly is a master of French style and works with the best in the field. Someone said of his Meyerbeer Robert le Diable that he "didn't take the opera seriously enough". On the contrary. He understands the genre fine: It's those who don't who should be taking him more seriously.

A great Rameau production. And soon we'l be able to compare it with another at the Opéra Comique.