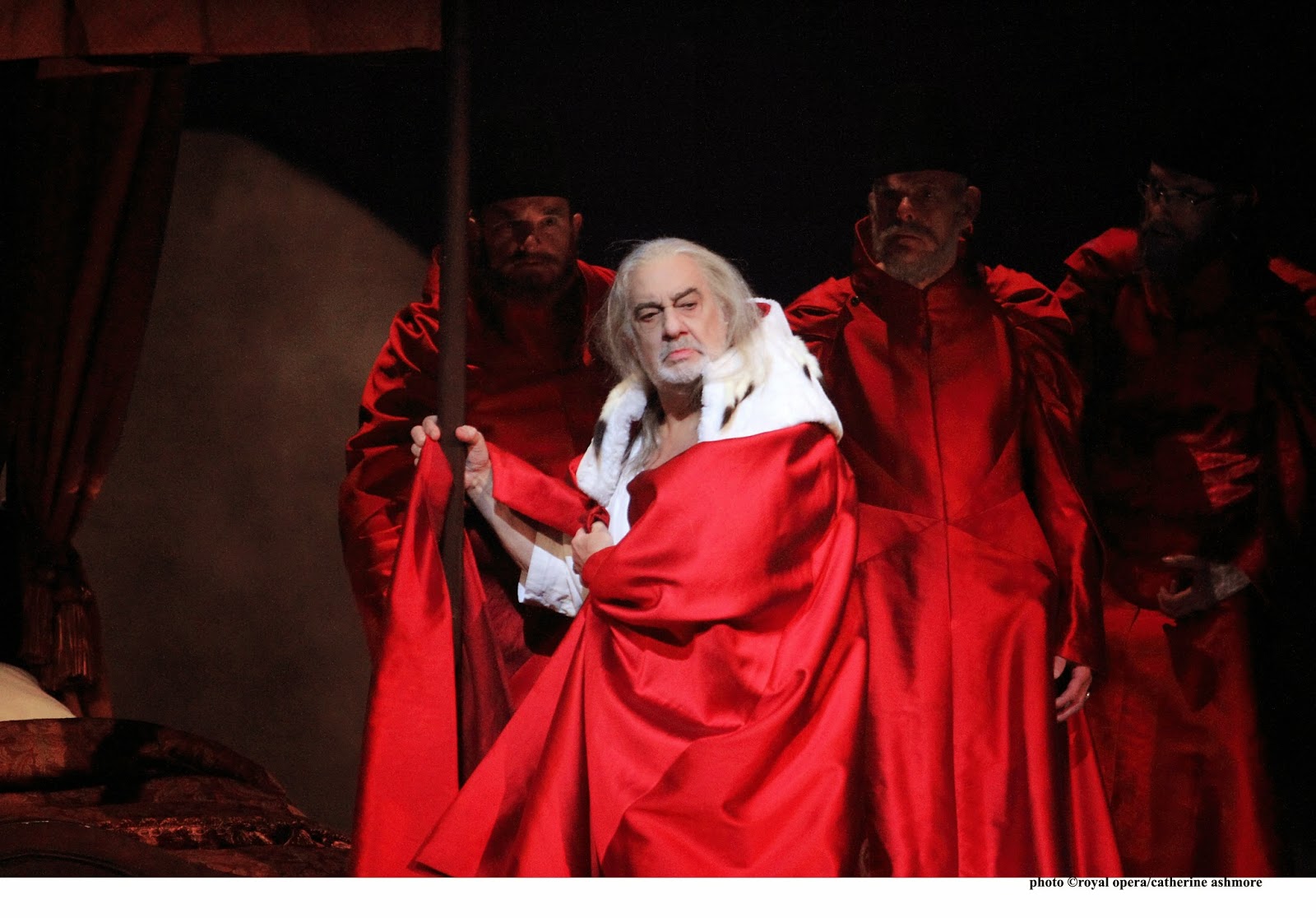 "Why should I go to hear Plácido Domingo" someone said when the Royal Opera House Verdi I due Foscari was announced.  There are very good reasons for doing so. First, Plácido Domingo is an icon. Even past his prime, he has such presence that he can present a role with style. When he does retire, we can look back and say we were there.  Secondly, Francesco Foscari is a role that doesn't present extreme vocal demands. Domingo didn't go much out of range. Foscari is an old man, worn out by tragedy and the intrigues of state. Sounding pinched and dry is part of the character. Domingo knows how to marshall his reserves. At the end, the old man rages against the city and the fates that have destroyed him. Mellifluous sounds would be inappropriate. Domingo sings with such intensity that it feels like a statement. We shouldn't shaft old Doges because they aren't what they were, any more than we should shaft Father Figures like Plácido Domingo. The Council of Ten might be ungrateful, but I, for one, treasured his performance. 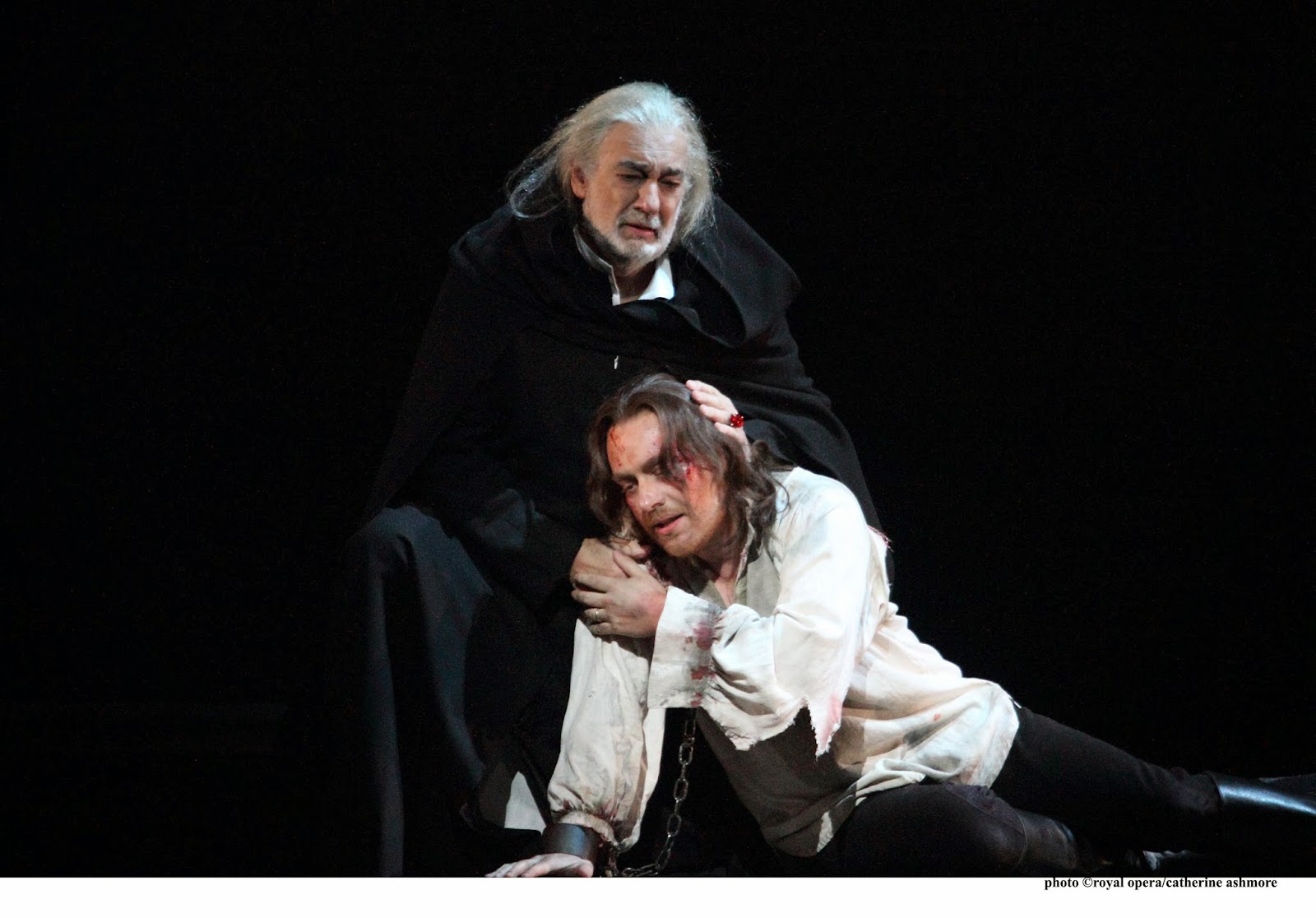 Domingo's presence in Los Angeles honours the city, just as a great Doge would have honoured Venice. That's perhaps why the Royal Opera House brought this production to London, so we could enjoy Domingo once again in a role he can still achieve well. The narrative is bleak and sombre. There aren't all that many flashy "big moments" for Antonio Pappano to whip the orchestra into full Verdian glory. The set (designs by Kevin Knight, with costumes by Mattie Ulrich) thus serve to distract from the opera itself. We delight in the gorgeous jewel colours that show Venice at its gaudy best.  But the gem is flawed. The city is rent by vicious intrigue. The Doge is destrotyed in a way that would hurt the most: his last son is accused, exiled and dies. It's not a pretty story. Still, we can fantasize, like the crowds in the piazza watching the circus acrobats and fire-eaters doing their tricks. What a brilliant metaphor! Even at this early age, was Verdi making oblique statements?

Wonderful atmospheric lighting by Bruno Poet, whose lighting suggests mists descending on the city, enveloping it in gloom. Most of the effects are created by video projections. so the set travels well. Just as the invention of electric light changed opera, video allows infinitely greater possibilities than, say, painted flats.  The art comes in using technique well. Here, though,  we see a backdrop of waves, which might have been exciting in Los Angeles, but London audiences would recognize as the backdrop to Birtwistle's The Minotaur. Numerous other projections onto cloth, which seem to be done by fairly basic oil and water washes projected onto cloth. The giant face of the Lion of Venice doesn't do as it's told. Maybe there's a very subtle truth in that but the production isn't quite that deep. The projections dissolve as the cloth is lowered, clumsily, into a hole in the floor. Apart from the nice costumes, the production feels minor house. Thaddeus Strassberger, an American, is director, but there's not much direction as such. The singers strike am-dram theatrical poses, but since the production revolves entirely around Plácido Domingo, there's probably little need to develop the other roles as drama. 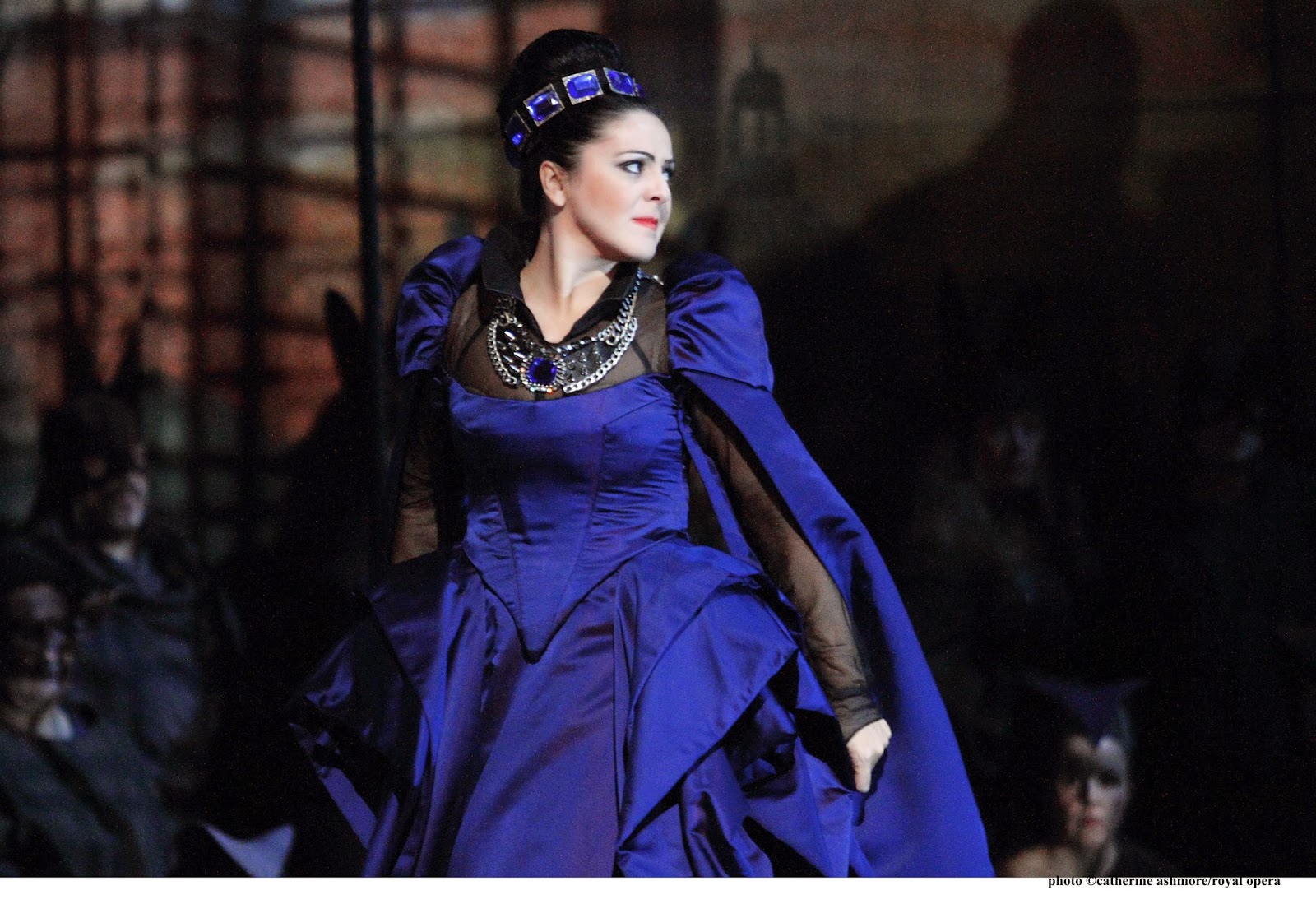 Vocally, Maria Agresta's Lucrezia Contarini.was the high point of the evening.What a pure, clean voice, capable of passionate conviction. Agresta and Francesco Meli, who sings Jacopo Foscari, provided the vocal colour otherwise in short supply, in an opera that depicts a harsh, repressive regime.  When Agresta and Meli sang their final duet, the opera came to life. That said, though, Maurizio Muraro, singing Jacopo Loredano, member of the Council of Ten, impressed with the authoritative richness in his voice. The other members of the Council,and the rows of women in white, priests, servants and so on, operate anonymously, which is perhaps right, but Muraro's Loredano has power and individuality. So, yes, go to this I due Foscari, for Plácido Domingo, around whom it's all been created.

Thank you for such a respectful, smart and intelligent review from I Due Foscari. I believe with all my heart that Placido Domingo deserves all the honors and words of gratitude for the many many many moments of joy and pleasure he gave to us during his unbelievable career, and thaks God he's still giving us. Best regards, Monica Menconi (Buenos Aires, Argentina)

Thank you,Monica ! Please pass this on. Of course this was not placido in his best, but I was happy enough (there are many singers worse even when they're young). My father loved him, forty years ago, so we would alwwys hear his music. Eventually my father got old and he started getting the problems we all will get when we are older. So going to this was for me, a tribute to a great artist (who can still act well) and also to my own Dad