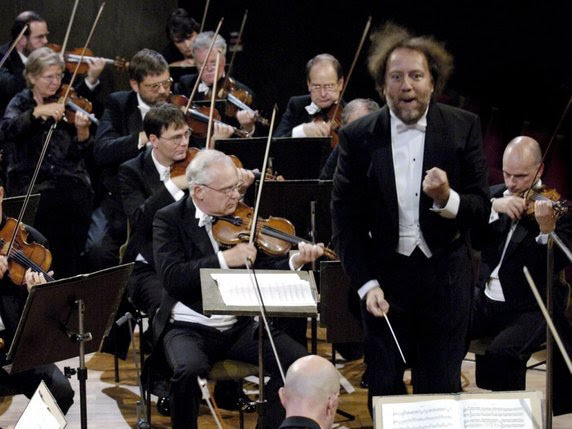 Riccardo Chailly conducts the Leipzig Gewandhaus Orchestra in three concerts at the Barbican, London, featuring dramatic orchestral works by Richard Strauss. Highlight of the first evening was Ein Heldenleben Op  40 (1898).  At a time when Wagner was fanatically idolized by followers even more extreme than The Master himself, it took guts for a composer still only in his 30's to poke fun at the whole concept of heroism. Cosima  would not have countenanced such impudence at Bayreuth. With his self-deprecating good humour, Strauss undermined  19th century concepts of power and value. In his own way, Strauss was more radical than Mahler.  Now there's a provocative thought!

For my review of the rest of the Chailly Leipzig Gewanndhausorchester Strauss Zyklus see HERE.

The Hero (represented by solo violin) embarks upon a mission.The references to Siegfried's Journey down the Rhine are clear - glorious, glowing strings   The famous "golden"  Leipzig sound, augmented by Chailly's ear for operas: a wonderful combination that may, if anything, blossom further when Andris Nelsons takes over from Chailly. Characteristically, Strauss undercuts this theme with delicate woodwind flutterings. Perhaps we're hearing the wood dove. But Chailly's musicians played with such definition that I felt that they were highlighting the vulnerability that so many bombastic heroes try to hide. The horns called, but heralded adversity rather than adventure, Chailly didn't hide the underlying dissonance, so the section "Des Helden Gefährtin"  felt more equivocal than  serene. A good insight. Perhaps Strauss was thinking how Siegfried dumps on Brünnhilde, the real hero of the Ring. Siegfried has no fear, but also little depth. Perhaps Strauss was also thinking of himself and  the  tempestuous Pauline de Ahna. His loyalty to her was also an act of quiet, good-natured heroism.

Bearing in mind this dialectic between public display and private good sense, The Hero's Battlefield takes on deeper meaning. Wonderful orchestration employed for maximum effect and played with passion by the huge orchestra: yet also telling details in and around it, like the trumpet solo and the descending "starlight" figures that might recall the woodwinds theme from before, or lead towards the resolution where peace, and perhaps wisdom may lie. Where, earlier, the celli murmured worshipful resonance, now they and the harps evoked a more sophisticated, complex mood.  Now, with the richness and character of their playing, the Leipzig Gewandhaus Orchestra demonstrated the true depth of meaning in this tone poem. The solo violin melody returned, confident and exqusitely beautiful, the full force of the orchestra supporting it. Real heroism , here : no costumes and hunting horns required.

When Chailly started conducting Concertgebouw Amsterdam, there were voices of dissent because he was different to the conductors they'd had before, because he did "new music" and because his Mahler didn't sound like Mengelberg or Haitink. So? Donald Mitchell loved Chailly's Mahler, which is good enough for me.  I've learned a lot from Chailly's very individual approach. Chailly spent 16 years at the helm of the Concertgebouw, a fact which speaks for itself. When he moved to Leipzig, the chemistry was instant. Right from the start, their partnership felt perfect. The "Chailly era", which has lasted ten years now,will be remembered as legend.  In London, the Leipzig Gewandhaus Orchestra is heard in this country often enough that they feel familiar, like a "house band"  Incredible luxury.

Before that perceptive Ein Heldenleben, Strauss's Don Juan Op 20, written ten years before, which showed how far Strauss had matured, as musician and as a human being. Between very early Strauss and early Strauss, Mozart Piano Concerto No 27 in B flat major, K595, with Maria João Pires.  The piece is elegant; she played with grace. But don't mistake  her delicate touch for weakness. Diminutive but formidably assertive, Pires's playing style is decidedly heroic.
at October 21, 2015