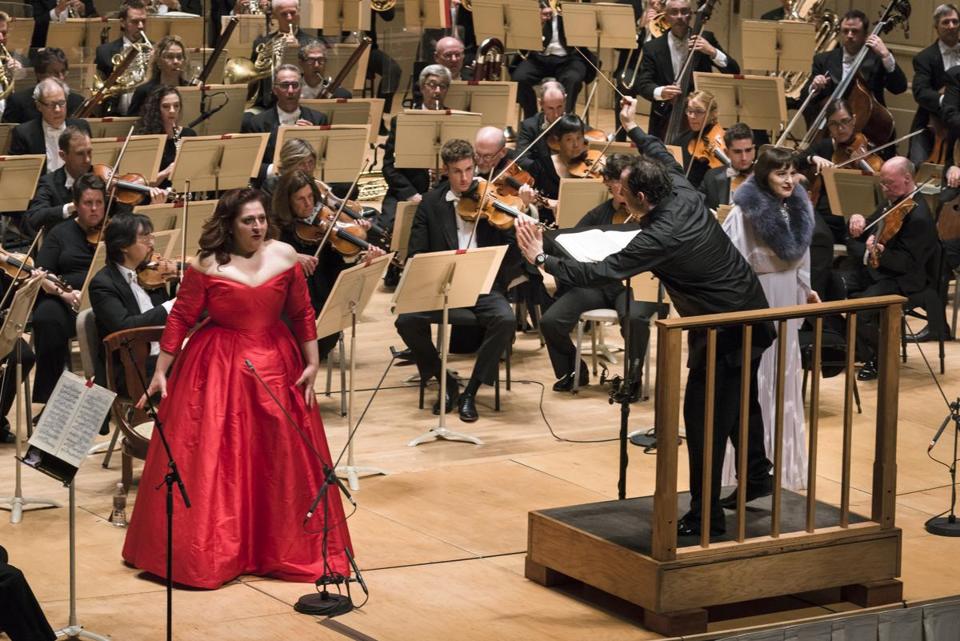 Richard Strauss Elektra in Boston with Andris Nelsons and Christine Goerke. Goerke "is" Elektra, like no-one else. She inhabits  the character, using her voice to channel  Elektra's turbulent emotions.  Elektra rejects everything her mother stands for, even if it means going feral. The part is merciless,  driven by wild extremes. Animal-like mutterings give way to howls of frenzied rage.  Yet Goerke takes her cue from the music around her. Even in the frenzy of her final dance, when words fail, Goerke exudes regal dignity. This performance was outstanding, by far the most intense of the three Elektras I've heard her sing.

Let us pray that the Boston Symphony Orchestra finds a way to make the broadcast more widely available, because this will be a kind of landmark. Goerke was amazing, but she was challenged and stimulated by equally exceptional orchestral playing.   Goerke and Nelsons have worked together before, and have a kind of natural chemistry,which is quite unique. When they did Strauss Elektra at the Royal Opera House in 2013, word got round even in early rehearsals that something extraordinary was going to happen. Read my review here. When the production was first done five years previously, it was misunderstood, but Nelsons and Goerke made it work. Some thought the production had changed. It hadn't. Lucky for us, it is being revived, because it's good. Hopefully, we'll get Goerke again. Last night, after the Boston performance, I thought about putting on the Aix production (Salonen/Chereau/Herlitzius) but couldn't face it.

This performance also proved why the Boston Symphony Orchestra wanted to grab Nelsons and hang onto him against all comers.  Just as there is more to singing than making sounds, there is a lot more to conducting than waving a baton. Nelsons is inspirational because he genuinely loves music. As Claudio Abbado said, that kind of love motivates creative people and fires them up to do things that those motivated by hate can't comprehend.  Listen to this interview with Christine Goerke where she explains how she works, and how singers work with conductors. What a personality, down to earth and no fool.

This superlative Elektra showed that  the BSO can rise to the challenge of a conductor who is very different, and who can push them in new  directions. Their  basic technical standards have improved greatly since I last heard them in August. Read my review of their Mahler 6th at the Proms here. (I was a lot less scathing than some.) This Elektra shows what they can do when they go outside their comfort zone. It was even  more visceral than Semyon Bychkov's Elektra with the BBC SO, where Goerke also sang with Gun-Brit Barkmin as Chrysothemis. Read my review here.  Boston Symphony Hall is a smaller place than the Royal Albert Hall, which helps concentrate the impact.

Now that Nelsons is taking over the Leipzig Gewandhaus Orchestra, the BSO will embark on a partnership with the oldest and possibly finest orchestra in the world.  This is an unprecedented deal, which raises the bar very, very high indeed.
at October 18, 2015