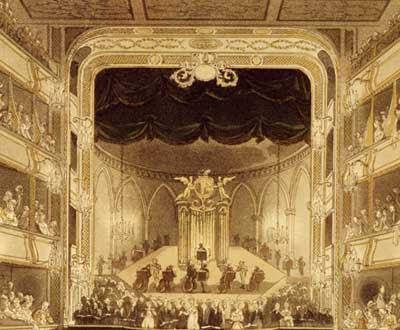 Hear and SMELL Handel at St John's Smith Square on Monday 2nd November. La Nuova Musica, dedicated to ardent and vivid performances, will present  Handel Acis and Galatea in a performance that will bring a whole new dimension to the idea of "period authenticity".

"In Handel's time scents abounded - from animals, lack of public hygiene, both personal and civic, and from expensive perfumes used by wealthy individuals and establishments, including the church. An opera would have been intensely scented, both accidentally and on purpose", says
Sarah McCartney of 4160Tuesday, who is providing value-added period detail. "Posies drowned out the stench of the street; dried flowers and incense created a suitable atmosphere, the wealthy powdered their hair and clothes with costly iris root, and kept deterred fleas and moths with patchouli."

"The 21st Century is scent averse. Smell is probably the only sense which has less to do in the modern world than in previous centuries. We now revere cleanliness and the "natural" scents of fresh, natural fruits (which are usually made with synthetics for practical reasons). It's a very unusual age. Our default is no scent at all, and removing all trace of natural smell from our bodies. For that reason, we won't need to fight the overwhelming olfactory bombardment that the 18th Century would have brought with it. People generally assume that naturals are safer, but in fact it's the other way round. For this project I'm using pure synthetics to avoid even the slightest possibility of any kind of allergic reaction. Rather than aiming for an authentic 18th century fragrance – which 21st Century audiences would find completely intolerable – I have created three light background scents to alter the mood, literally changing the atmosphere. "