The 120th anniversary concert of the Czech Philharmonic Orchestra is now available from CzechTV   on arte.tv.   All the musicians are wearing golden African daisies to mark the occasion -gold for happiness and warmth, the daisies bright but tough. Sunflowers would be too big and roses too delicate. The  programme honours masters associated with the Prague Philharmonic - Janáček's Des Spielmanns Kind, Ballade für Orchester, Suk's Ein Märchen Op 16 and Dvořák Slawische Tänze Op. 72

Janáček's Des Spielmanns Kind, Ballade für Orchester, from 1912, revised 1914, already exhibits signs of  the maturity that lay just ahead,  Janáček based the piece on a poem by Svatopluk Cech. whose novels were soon to inspire The Excursions of Mr. Brouček to the Moon and to the 15th Century (1920)  Although this piece is not written for voices, it recounts the story of a village fiddler who dies in poverty, leaving only his violin and his orphaned child. A fairly common meme in middle European folklore, with many  variations, some quite macabre. The violin often represents the Devil. In Janáček's music the violin leads the orchestra seductively, building up a tension undercut by the flowing violin line which is then taken up and varied by the winds - darker sounds, suggesting menace, which once again dissipates into the plaintive call of the violin. Then, characteristic Janáček descending triplets and the low voice of a clarinet. The fiddler's child is adopted by a village woman but this peace won't last. One night the woman dreams she sees the ghost of the fiddler by her bed. Next morning, the child and the violin have disappeared. Rushing strings introduce a new mood, which leads to a kind of elegaic calm. Father and son are together, again. There's not much of the Devil in this. It's nowhere near a Janáček opera, but harks back to other music of its time.

This point  was reinforced by hearing Josef Suk's Ein Märchen  (Pohádka) Op. 16  Originally written in 1897/8 as incidental music for a play by Julius Zeyer, it was adapted as a suite first performed by this orchestra in 1901, revised by the composer in 1912. Radúz and Mahulena and lovers. The first part  - again with dominant solo violin - is an atmospheric prelude for the striking "Game  of  Swans and Peacocks" - how the music prances and dances, ending with a flourish.  The Funeral Music in the third section flows with mysterious,undercurrents.  Jirí Belohlávek conducts it so it feels daring, and suitably disturbing.  The lovers have been cursed by Quenn Runa, an evil presence like the Devil in the Fiddler legends. In the dramatic Finale, the lovers triumph over death. Yet again, the solo violin leads. This piece isn't "folkoric" .  Suk's distinctive voice gives it depth and sophistication.  Drama by symphonic means.

This concert took place in the Rudolfinium,  where the Czech Philharmonic Orchestra is based. Above the interior, below the statue of Antonin Dvořák, proudly facing the building. The Rudolfinium has withstood war and occupation. It's a shrine to the blossoming of Czech music and national spirit.  Belohlávek concluded this anniversary concert with Dvořák Slawische Tänze Op. 72 (1878-86).  Cheerful, lively playing. Maybe somewhere in the afterlife, the composer is beaming with joy. 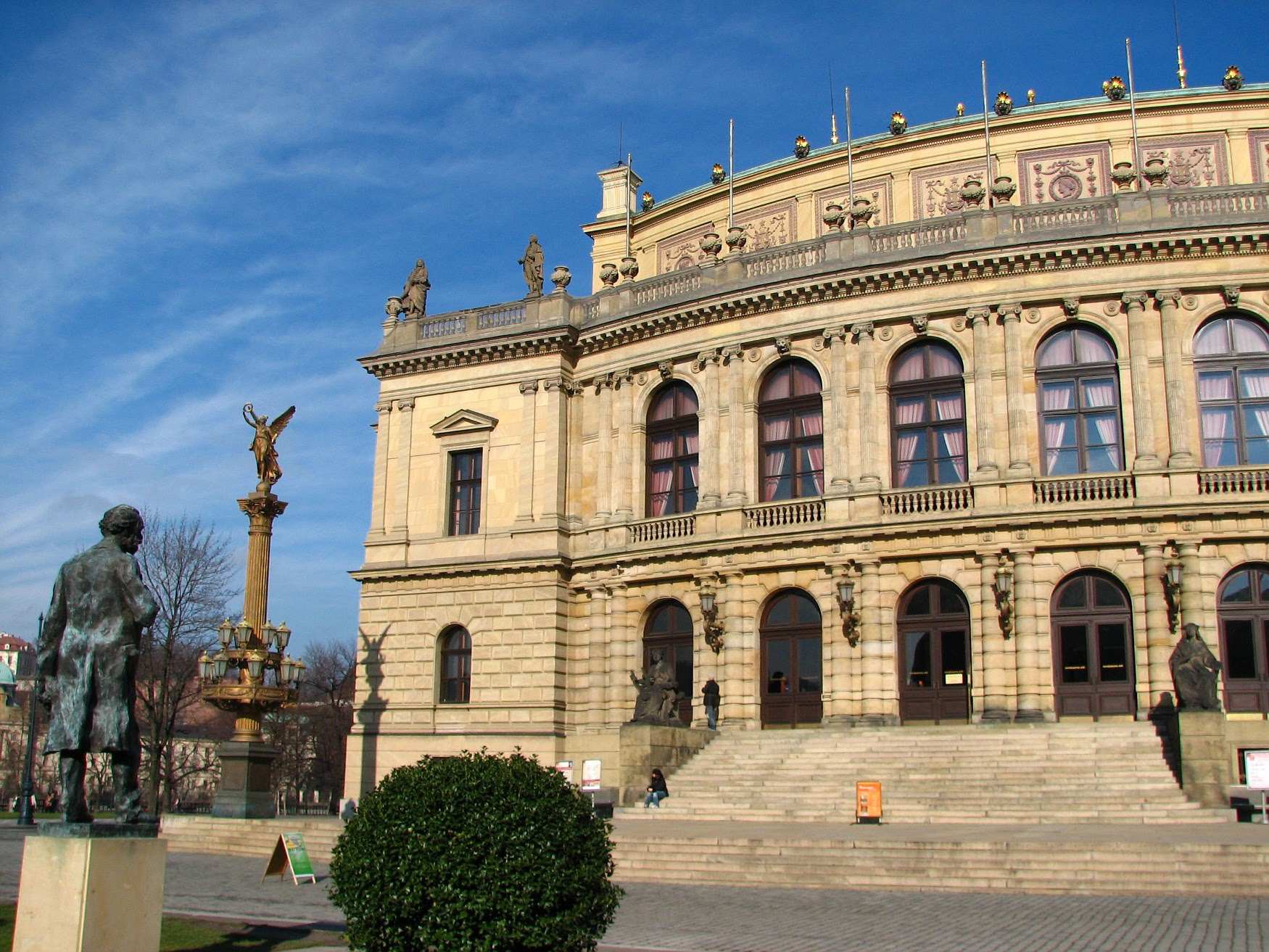