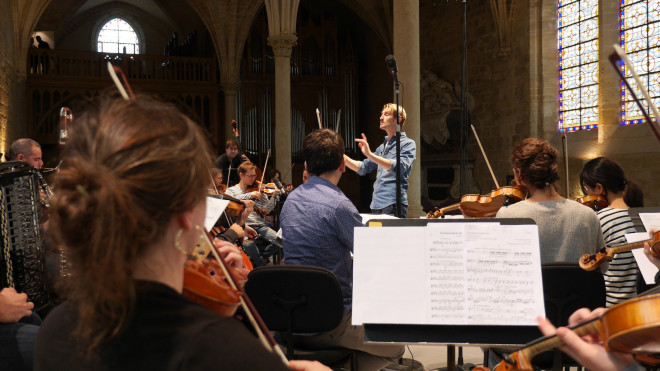 A very unusual concert last month at Royaumont in the L'Île-de-France,"Jardins d'amour", for all three pieces deal with gardens, lushness and enchantment. - Mahler Blumine, Wagner Good Friday Music and Zemlinsky's Lyric Symphony  with the Secession Orchestra, conducted by Clément Mao-Takacs with soloists Stéphane Degout and Elsa Dreisig, now on France Musique.  Royaumont, despite its royal connections, was a Cistercian monastery, not quite the place for full-scale Wagner, or Zemlinsky or Mahler, so this was an opportunity for close-up, detailed listening.

It was also a good way to hear Mahler's orphan Blumine (1884) written as incidental music for the play Der Trompeter von Sakkingen, now lost.  At first, he incorporated it into his Symphony no 1, but discarded it. It wasn't published together with the symphony, and was also thought lost  until Donald Mitchell discovered the manuscript in 1967.  Though it does get played, it doesn't really fit well with the symphony, so is generally heard as a stand-alone. It's a very early piece which has its charms but is also rather slight. As Prof. Henry-Louis de La Grange said, soon after the discovery,"It is the music of a late-nineteenth-century Mendelssohn, pretty, charming, lightweight, urbane, and repetitious, just what Mahler’s music never is." All the more reason for enjoying it as an entrée. The instrumentation is so spare that it's effectively a chamber piece anyway.  The horn call, which will become a Mahler signature, rises above a shimmering background of strings, til it's joined by oboe, clarinet and flutes in serenade. Eventually the textures thin out, with a long high note hanging in the air. Wagner's Good Friday Music from Parsifal fares less well in chamber reduction. Though it's suitably reverential it's not easy to capture the power of the original.  Nonetheless it connects well with the theme of regeneration central to Zemlinsky's Lyric Symphony, the highlight of this programme, in the 2012 arrangement by Thomas Heinisch.   .

Regeneration and renewal, the handing on of enlightenment, even after death. Although Zemlinsky's music is lush, Tagore's texts don't depict a love affair in the usual romantic sense.  The music is sensual, but the longing here is for higher goals than earthly lust. At the end, the Prince sings  Ich halte meine Lampe in die Höhe, um dir auf deinen Weg zu leuchten. (I hold my lamp up high to light your way. .Lovers must part, for life has a higher purpose.). Zemlinsky compared this work to Mahler's Das Lied von der Erde , wishful thinking on his part since there really aren't many points oif comparison apart from the exotic setting.. But what they do share is the idea that things go on, even when one generation gives way to the next. Please read my piece on what is still the finest recording of the work : Eschenbach, Goerne, Schafer. I've written lots on this symphony and composer.

Thus the piece adapts well to chamber arrangement where the emphasis goes towards essential meaning, as opposed to lushness for its own sake, which throws some performances way off beam. No problem here, with cleaner textures, and the soloists, Elsa Dreisig and Stéphane Degout, whose clear, pure baritone captures the images of light in the text.   This new arrangement, published by Schott, should have a place in performing spaces where a full orchestra isn't feasible, because it's very true to the original.

Heinisch writes "To my surprise, it was relatively easy to arrange the first three movements for ensemble, as the orchestra never goes beyond the traditional four-part harmony, with a texture that – interestingly enough – is closer to Brahms than, for instance, to Schönberg. From an instrumentation perspective, the exquisite slow fourth movement “Sprich zu mir, Geliebter” (Speak to me, my love) in the middle of the work poses a challenge, given the subtle separation of the string parts. As the string parts are not played by several instrumentalists, it was necessary to assign some of them to the harmonium or accordion (either can be used in my version). I feel that this movement has lost none of its mysterious charm through this alteration. It was also necessary to make changes to the short yet massive fifth movement. By introducing the shrill E-flat clarinet, which does not feature at all in the original, Ihave attempted to do justice to the abrasiveness and corporeality of this movement."


Definitely worth a listen !