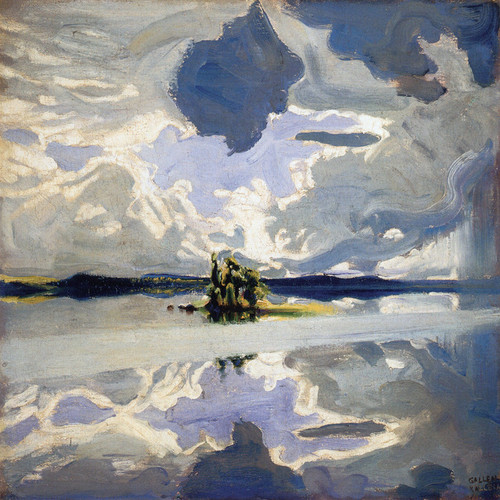 Sakari Oramo's saga through Sibelius with the BBC Symphony Orchestra at the Barbican London  got into stride with Sibelius Symphony no 3 op 52 (1907).  Sibelius symphonies we can hear any time, and Oramo's very, very good, so the challenge lies in programming. How do the combinations work to enhance Sibelius? In the first concert in this series, the answers were obvious - the perennial Sibelius 5 with Richard Strauss and Alban Berg.  In this second concert we heard Sibelius  with César Franck's Symphonic Variations, Ravel's Piano Concerto for the Left Hand (soloist Jean-Efflam Bavouzet)  and Florent
Schmitt's Symphony no 2 op 1957. Ostensibly a curious choice, but on reflection, rather interesting.
Sibelius Symphony no 3 isn't as omnipresent as Sibelius 5 and 7, both so remarkable that they are frequently recorded together, though less often performed together live :  an experience too overwhelming for either audience or orchestra.  Sibelius's Third, like his Sixth, is more rarified, almost more "Finlandia" than Finlandia (1899).  Its impulse is distinctively"Finnish"   But it was written long before Finland was free from Russia.  Thus the political and artistic need for a uniquely Finnish identity. The revival of interest in the Kalevala and in the heartlands of Karelia shaped Sibelius's artistic imagination.  In this third symphony, Sibelius engages with an aesthetic that seems inspired by open horizons, clean air and fresh springs flowing from melting ice, water, a landscape where people live close to Nature, uncorrupted by the excess of "civilization".  Hence the picture at left of Lake Keitele, by Sibelius's close friend Akseli Gallen-Kalleja, painted in 1905, and his painting Clouds above a Lake, above, from the same period.  Notice the almost abstraction, capturing essence with free spirited spontaneity. The complete opposite of 19th century over-elaborate excess. A similar aesthetic informed the Secession first in Munich, then Vienna, and influenced the Impressionists and Art Nouveau in France. 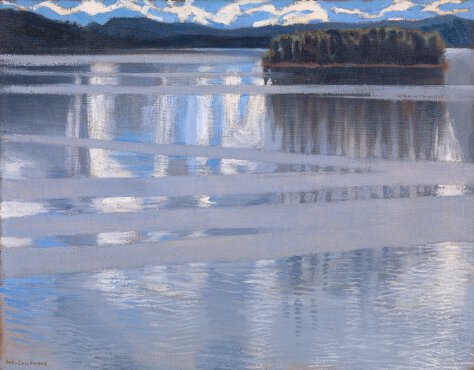 Sibelius Symphony no 3 is relatively short, three movements in which ideas are compressed with a clarity which even harks back to Classical Antiquity as defined by 18th century idealism.  The symphony begins with a theme which will later become almost a Sibelius signature - rushing, angular rhythms for strings, celli and basses lit by single calls from brass, leading passages of exquisite simplicity where individual, woodwinds sing.

Oramo defined the pace with vivid energy, so details shine. The suggestion of bells (on a cart?) , spiralling figures that fly like objects blown in a breeze.  Strong chords, before the music subsides into chorale-like serenity. The mood in the second movement is quieter and more mysterious. Single notes plucked with deliberate clarity, shimmering, dark hued strings, lit by single instrument figures dancing elusively. The flowing rhythms returned, more muted, but persistent.  Wonderful symmetry between the first two movements, elegantly  executed, which are in turn reflected in the final movement.  Edgy rushing rhythms resolve into firm blocks of sound then to a glorious coda which shone with positive affirmation.  Clarity over chaos,  multiple life forms operating in cohesion. Like Nature itself.

Thus the wisdom of pairing Sibelius 3 with César Franck's Symphonic Variations, where themes differ and vary yet hold together, supported by coherent logic.  Flowing energy in the performance too. In each concert in this series, a concertante piece, so this time one for piano, in Ravel's Piano Concerto for the Left Hand . Jean-Efflam Bavouzet is relatively new to the piece but played with great depth of feeling, which I appreciated, since the piece was written in response to tragedy. Paul Wittgenstein lost his right hand in war. His career would have ended were it not for friends like Ravel. (On the BBC rebroadcast, it was mentioned that Bavouzet's mother, who loved the piece, died a short while ago). It's a virtuoso piece which requires superb technique, proving that a good player can do more with one hand than some can do with two. Florent Schmitt's Symphony no 2 op 134 (1957).  received an infinitely better performance than it got from Leif Segestam. Oramo has clearly thought about the piece, analysing its merits, and the BBCSO is grande luxe compared to some of the orchestras who've done Schmitt.  (read my piece on Antony and Cleopatra here)  Schmitt's best works are those where florid colours conjure images of exotic luxury but the Symphony is lower key. It's by no means "old fashioned", since it reflects a lot of music from the 1930's to 50's and later. Glitter rather than 24K.  It's pleasant but without the inventive flair of Stravinsky or the panache of Korngold.  At the age of 87, Schmitt might have been enjoying a retrospective of his own, which is fair enough.

Coming up in the BBC SO Sibelius series :