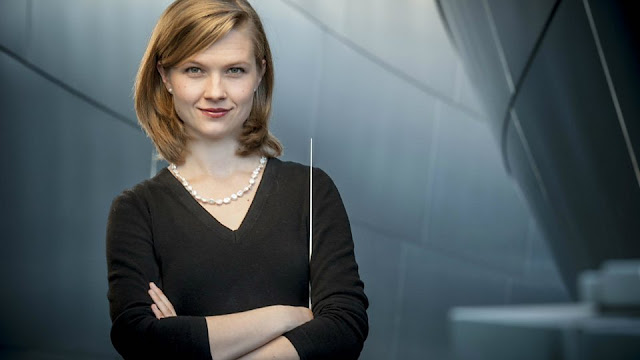 Mahler's Symphony no 4 concludes with "a child's view of Heaven". Not with a grandiose statement, but with a song about food! The child's so young and so innocent that his view of the world goes no further than what's for dinner. When its tummy's full, it will drift to sleep, satisfied, untroubled by the images of death all around.  So much for the idea that Mahler performance should be neurotic, selfish excess. Understand this movement and symphony and you have a key to understanding Mahler's work as a whole.  Last week, Mirga Gražinyte-Tyla did M4 with three trebles from the Trinity Boys Choir with the City of Birmingham Symphony Orchestra : an historic occasion so unique that it's a wonder that hardly anone paid attention.  Let's hope that the performance was recorded because hearing it might contribute a lot to how we hear Mahler and interpret his work.

Although there must have been thousands of performances over the years, sopranos have dominated, with the exception of a few mezzos and even fewer trebles or boy sopranos.   Good practical reasons: the part poses challenges of technique and interpretation, and is substantial enough to require great stamina.  Adult singers - at least the good ones - can bring out the nuances of meaning and sing with the radiance the part requires. Even good child singers struggle, and a sensitive conductor has to hold the orchestra back so as not to overwhelm the kid.  But children's voices have a very special quality which could work very well indeed in terms of expressing the ideas behind the symphony.  So how to overcome the physical limitations of child singers ?  Mirga Gražinyte-Tyla's solution - three trebles, supporting each other  Brilliant idea ! The boys support each other so no-one is exposed for long, and together they form a stronger response to the orchestra.  Gražinyte-Tyla was a choral singer herself, so she understands the practicalities of performance.

Using trebles is much more than a question of liking boys.  Des Knaben Wunderhorn wasn't a book for children but it engages with an aesthetic where sophisticated concepts were dealt with in simple, direct terms.  Freud and Carl Jung would connect childhood experience to adult behaviour in psychology, and Bruno Bettelheim  would extend Jung's ideas on archetypes into the study of "The Uses of Enchantment". Des Knaben Wunderhorn, (the book) with its connections to folk wisdom and the private sphere, is thus much more subversive than one might assume

Trebles are part of the European choral tradition. For many, joining the Church was an escape from poverty and hardship. And thus to the Romantic era, when the stranglehold of Church and State on art was swept away by greater emphasis on individual expression. Even now, in Europe, being a treble can be a path to a good education. In Europe, talented kids win scholarships to schools with elite choirs, rather like footballers in the US  get into Ivy League universities. So I cannot agree that trebles are twee or kitsch. They stand for a very great tradition.  Some people are disturbed by the sweetness of their sound, but that says more about the insecurities of those who don't get the genre than about the genre itself.  All men were boys once, what's scary about that?

Then there's the inherent fragility of the voice type. No-one stays a treble forever, By the time a boy is mature enough to handle bigger parts, his voice might break at any time.  In the case of Mahler's Symphony no 4. that adds extra meaning.  The child who is singing is dead. Sunny as the symphony can be,  it's haunted by the spectre of death, of children and animals being led to slaughter.  Again and again, in Mahler's metaphysics, death is conquered by some more powerful force, be it nature or spirituality or the creative impulse.  For a while, in the 60's, Mahler interpretation was coloured by Alma's view of Mahler as grovelling neurotic, but now, thanks to Prof Henry-Louis de La Grange and to the music itself, we ought to know better.  The child in M4 stands for Mahler himself, full of wonder, and indeed for ourselves, especially in this cynical post-truth world.

There is no way trebles will ever become common practice. The CBSO used singers from the Trinity Boys Choir, one of the top choirs in this country.  In the past, singers from the Wiener Sängerknaben and the Tölzer Knabenchor have done the part : seriously elite, by no means the average church choir.  Even they have struggled, and they're the pinnacle.  A lot also has to do with the sensitivity of the conductor. It is not enough to stick a kid in front of an orchestra like a novelty. Both Bernstein's trebles didn't get the support they needed because they were added like extras on interpretations that didn't reach the subtle depths of the symphony.  Allan Bergius and Helmut Wittek sang some very beautiful passages but their singing wasn't integrated into the whole approach.  They weren't performing monkeys, they deserved better.  Anton Nanut's M4 with 11 year old Max Emanuel Cenčić on the other hand was more sensitively thought through, Nanut restraining the orchestra so the delicate purity of Cenčić's unusually high soprano felt extraordinarily moving.  That's what the symphony is really all about !  So those of us who couldn't get to Birmingham for Gražinyte-Tyla's CBSO Mahler 4 with the three trebles will have to keep dreaming of what might have been.
Please see my other posts on Mahler 4 plus loads more on Mahler and his period.
at October 01, 2017