A landmark recording because it reflects the Scharoun Ensemble's years of experience with Henze and his music. Their relationship began in 1983, shortly after the ensemble was formed. Kammermusik 1958 is one of their signature pieces. "It  soon became clear" they write "that the composer's interpretation of Kammermusik 1958 was freer than the written score. Henze took some tempi more slowly, which resulted in more songful, indeed quite romantic music". This performance is outstanding, more assured and more idiomatic than the original recording made in November 1958 with Peter Pears and Julian Bream. Though Henze himself conducted that premiere, he was young, still very much in thrall to Britten, Pears and their cliquey circles.  As Henze developed, he became himself, finding the freer, more poetic approach this recording honours.  Obviously the first recording is part of the archive, but this new performance opens horizons: very much in the spirit of the poetry of Hölderlin's text and of Henze's mature work.  This performance  also uses Henze's 1963 revision of the score.
Kammermusik 1958 is also a landmark because it represents a  period in which Henze made a creative breakthrough.  It connects to the sensuality of Undine and to the esoteric Being Beauteous, but also explores ideas which Henze would develop in later years.  The piece begins with a horn call, which is repeated more quietly, as if in response - a deliberate reference to Britten's Serenade for tenor, horn and strings. Almost immediately, though, Henze breaks into new territory - long, shimmering lines that seem to stretch into endless space. The clarinet leads, like the call of a shepherd's flute sounding out over distance. 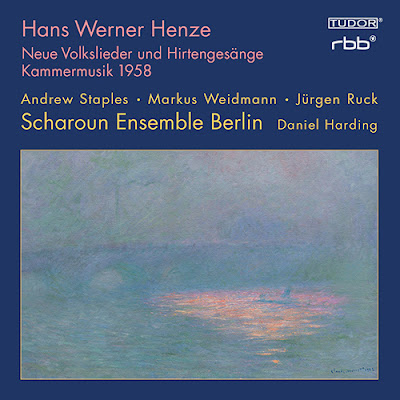 From this evolves the first song with its long, arching lines that rise expansively, accompanied by guitar.  The text is abstract, almost impressionistic in its evocation of colour and mood. ."In lieblicher Blue blühet mit dem metallenen Dache der Kirchtum."  Hölderlin in his tower, singing to the moon,  Andrew Staples and Jürgen Rock, eternal troubadours.   Hölderlin's poetry fascinates modern composers.This particular hymn has also been set by Wilhelm Killmayer and Julian Anderson (whose version will be heard  21/10/17 at the Barbican.)  Staples's singing is pristine, for "Reinheit aber ist auch Schönheit". Two Tentos for solo guitar frame the second song in which Henze sets another section of Hölderlin's hymn.  Innen aus verschiedenem entsteht, where the poet connects humble mankind with the vastness of the universe.   "als der Mensch, der heisset ein Bild der Gottheit". Rock's playing creates intimacy, cradling the song with protective warmth. It also recreates the flowing rhythms of Tento I which Henze titled "Du schönes Bächlein"   a reference to images in the text, which resurface in the third song, where the pace picks up.   Staples sings the phrase "Du schönes Bächlein" with minimal accompaniment, as if the poet were transfixed by a vision. 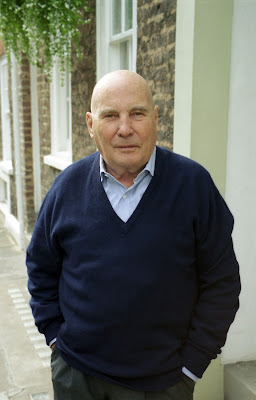 As the voice falls silent, the ensemble emerge in a short Sonata for the ensemble, brisk, turbulent figures that seem to have a life of their own.  "Möcht ich ein Komet sein?" Staples sings.  Key phrases like  "eine schöne Jungfrau" deliciously savoured. The final line "Myrten aber gibt es in Greichenland" shone with intense light, for this epitomizes Hölderlin's  concepts of beauty, from the ideals of antiquity far into the future.  For Henze, the guitar is more than a “Mediterranean" device. It connects to the lute of Orpheus and all that implied in classical mythology.  An inventive cadenza, where the strings dance and cor and bassoon moan, until strong chords in ensemble introduce the next song, "Wenn einer in den Spiegel siehet".  which flows  with great freedom, as if the clarity of the  mirror were drawing ideas into sharper focus.  The tento for guitar, which follows, is titled "Sohn Laios" which connects to the references to Oedipus in this and the final song, "Wie Bäche reißt des Ende von Etwas mich dahin".  Henze  creates a stream of consciousness, weaving text, music, ideas and images together in a stream that's at once elusive yet intriguing.  Hölderlin contemplates the destiny of suffering. "Leben ist Tod , und Tod ist auch ein Leben". Long, plaintive vocal lines,yet oddly  affirmative, merging into a beautiful wind melody, which might suggest ancient flutes. Horn, cor, bassoon and contrabass create mysterious atmosphere, lightened by strings. This last Epilogue, added by Henze in1963, is extraordinarily moving, very "inwards", true to Hölderlin and his visionary imagination.  In the notes, Jürgen Rock comments on the connections between the Oedipus legend and Henze's socio-political views and his work in music theatre.  In some ways, the Oedipus theme might also apply to other things in Henze's life,including his relationship to Britten.
The Scharoun Ensemble Berlin paired this Henze Kammermusik 1958 with Henze's Neue Volkslieder und Hirtengesänge  (1983/1996) for Bassoon, Guitar and String Trio. Excellent choice, for these extend the idea of Arcadian "Shepherd" songs and fit well with Hölderlin.  These songs were premiered by the Scharoun Ensemble Berlin in 1997, presumably with Henze himself in attendance.