What Semyon Bychkov will bring to the Czech Philharmonic Orchestra 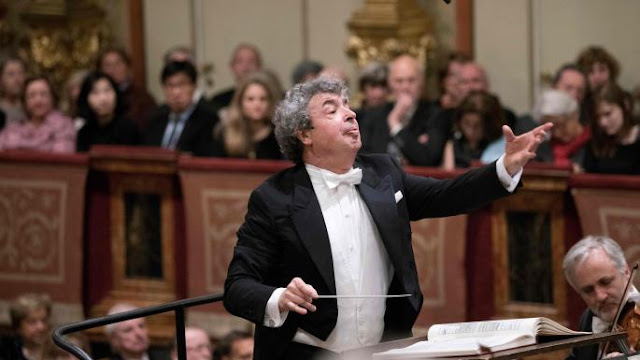 The news that Semyon Bychkov has been named new Chief Conductor of the Czech Philharmonic has gone round the world, but what does the news portend ?  Jiří Bělohlávek's contract had been renewed to 2020. Though he had been ill for some time his sudden death was unexpected.  The Chief Conductor position is a figurehead who defines an orchestra's profile and artistic direction.

Conductor Chess is not a beauty contest but hard business sense.  In June, the  Prague press was abuzz with speculation. The orchestra's management were quoted as saying the choice would depend on "publiku, nahrávacím společnostem, zahraničním pořadatelům i k ministerstvu kultury".ie the public, recording companies, foreign organizations and The Ministry of Culture.

Among the contenders mentioned were Christoph Eschenbach, John Eliot Gardiner, Fabio Luisi, Kent Nagano, and Jaap van Zweden.  So they wanted big names.   Bychkov's a big name,  but his  advantage was that Decca recentoy recorded the firsts two discs of his Tchaikovsky Project with the Czech Philharmonic in Prague.  Bychkov's recorded with  the Vienna Phil, the Berliner Phil, the Concertgebouw Amsterdam  and otthers, and he's been doing Tchaikovsky nearly all his working life, so the Czech Phil are on to a winner.   Bychkov also conducted Tchaikovsky's Francesca da Rimini, which marked the opening of Smetana's Litomyšl Festival 2017,  Presumably Francesca's next on nthe recording schedule as it was part of Bychkov's  "Beloved Friends" Tchaikovsky Project tour around Europe. (Please read my piece about the Barbican concerts here)

"As is evidenced by everything that he undertakes", the orchestra's announcement states, "Bychkov's commitment to the Czech Philharmonic will be total. In addition to conducting the opening concerts of the season, six subscription weeks and two weeks of studio recordings, he will lead the Orchestra on tour, and at the major Czech festivals and concerts that are an important and integral part of the Orchestra's presence including Prague Spring, Dvořák's Prague and Smetana's Litomyšl."

Bychkov himself has said "The Czech Philharmonic is among the very few orchestras that have managed to preserve a unique identity. In a music world that is increasingly globalized and uniform, the Orchestra's noble tradition has retained authenticity of expression and sound, making it one of the world's artistic treasures. When the orchestra and Czech government asked me to succeed beloved Jiří Bělohlávek, I felt deeply honoured by the trust they were ready to place in me. There is no greater privilege for an artist than to become part of and lead an institution that shares the same values, the same commitment and the same devotion to the art of music."

So what of he orchestra's unique  heritage? One of Bělohlávek's great achievements was to remind the world that the Czech idiom has a distinctive flavour, deriving from the languages of the region.  Interpretation, too, is enhanced by knowing the history and culture.  Of course that doesn't mean you need to be Czech, but it's a good foundation.  Unusually, nearly all the musicians in the orchestra are native speakers, and they also serve the National Theatre, the nation's premiere opera house.
Together with the news about Bychkov was the announcement of two Principal Guest Conductors, Jakub Hrůša and Tomáš Netopil.   Hrůša is exceptional, with such distinctive flair that he's destined to go a long way.  His Time Will Come !  He's outstanding because he brings intelligent insight into what he does.  Please read here about his programme based on the role of the Hussite Hymn in Bohemian history and music.   In London, we are fortunate that Hrůša is now Principal Guest with the Philharmonia Orchestra.  He's also Chief  of the  Bamberg Symphony Orchestra, with its great pedigree.  The Czech Philharmonic has a new Concertmaster, too, in  Josef Špaček, the youngest concertmaster in  the orchestra's history.
at October 17, 2017