Sakari Oramo conducted the BBC SO at the Barbican last night : Anna Clyne and Benjamin Britten   Two British composers, one a distinctive new voice, the other represented by a work which  in recent years has found its true place in the canon.  Heard together with a particularly fresh, vernal Beethoven Symphony no 6, this made a satisfying evening.

This was the UK premiere of Anna Clyne’s This Midnight Hour, first heard in Paris in 2015.  Quality, in Anna Clyne’s case, gets her ahead, not her gender.  She’s so original that the patronizing tag “female composer” is an insult. What is “female” music anyway. This Midnight Hour is ambitious work on a grand scale, though compact and precise.  Rushing figures fly forwards, quite ferociously, leading to a passage of surprising clarity.  Very rich sounds - especially the low strings - suggest dense textures, carefully defined.  From moments of near-silence,  pounding figures push forward, aletrnating with sudden lyrical passages. Winds and brass blow ellipses that seem to probe space.  Two staccato thunderclaps, and the music swirls into fast paced turbulence, whipped by ellipses of high-pitched woodwinds. More combinations of quietness and explosive staccato, then a long passage of almost Romantic lushness, evoking the sounds of Spain. A long-held single note (bass trombone), evolves into nocturnal fanfare.  A sudden crash on timpani, an abrupt end, like an exclamation point.  Later I realized that this is a reference to a poem by Juan Ramón Jiménez which Clyne was responding to.  “La musica; mujer desnuda,corriendo loca por la noche pura!” (The music: a naked woman, running madly in the pure night) . Apparently there are also references to Baudelaire’s Harmonie du soir (“Le violon frémit comme un coeur qu’on afflige,”), but This Midnight Hour was impressive even if I didn’t get that other level. There's no rule, whatsoever that poems have to be set word for word !

Although Britten didn't join the International Brigades in Spain, he believed passionately in their cause and was traumatized by Franco's victory.  Heartsick, Britten feared that Europe would become engulfed in fascism, and needed to get away. His Violin Concerto is a product of that period of intense despair.  Britten and Pears left Britain in April, 1939, when war seemed far away, and returned at some danger during hostilities to help the war effort as non-combatants. Those who have never heard his Violin Concerto may have thought him a coward but do not realize that it takes moral courage to write a deeply uncomforting statement like this.  Perhaps only now can we appreciate its place in the canon of major works by a composer who thought more deeply about society than most. 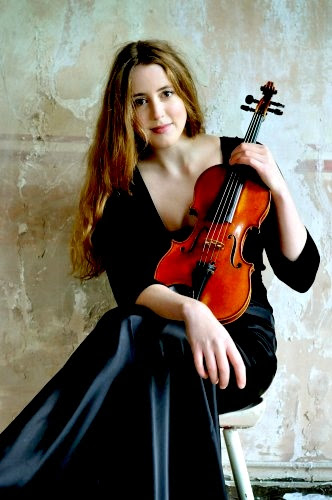 From a hushed string introduction, the violin (soloist Vilde Frang) rose, against an understated but ominous background of percussion and brass. Despite the lyricism of the violin line, the idea of war lurked, with menace.  Hollow pizzicato suggested agitation.  The second movement has the character of nightmare scherzo, a battery of strings, brass and percussion battling with the violin, which remains detached. Oramo shaped the tumult carefully bringing out the huge, angular blocks of sound, booming bassoons,  spikey details in the strings, rumbling drums, creating contrast with the violin. In the cadenza, Frang's pristine style lit up the dizzying diminuendo : not a defeat so much as "tactical withdrawal".  In the passacaglia, descending notes from the brass moved in careful procession. Now the violin line was haunted by other strings, mumuring as if heard from afar. Eventually an anthem builds up, the brass no longer against the soloist, but leading forwards.  Tense, brittle figures suggested gunfire, but the violin remained uncowed.  A particularly full-throated tutti section,  almost a chorale, violin and orchestra united in common cause.  From the strings, a good suggestion of guitars : the ghosts of the dead in Spain, rising again, led by the violin, marching quietly onward.

A truly "pastoral" Beethoven Symphony no 6, unusually fresh and vernal, which worked well in connection with Britten's Violin Concerto. Perhaps the storm wasn't as overwhelming as usual, but the sense of revitalization Oramo found after it more than compensated.  After the storm, the peasants are revitalized.  Like the fallen in Spain, they will not be defeated.