Schubert Schwanengesang, D957 (1828) with Florian Boesch and Malcolm Martineau at the Wigmore Hall, London. Schwanengesang isn't Schubert's Swan Song any more than it is a cycle like Die schöne Müllerin or Winterreise.  The title was given it by his publishers Haslingers, after his death, combining settings of two very differet poets, Ludwig Rellstab and Heinrich Heine.  Wigmore Hall audiences have heard lots of good Schwanengesangs, including Boesch and Martineau performances in the past, but this was something special.

Since Schwanengesang is not a song cycle, there's no reason why song order can't be altered.  Boesch and Martineau began with Liebesbotschaft, following it with Frühlingssensucht and Ständchen, forming a bouquet, where the songs complemented each other. This meant that Boesch could focuss on emotional finesse.  We're so used to good baritone performances that it's easy to underestimate the delicacy in these songs, but Boesch, despite the firmness in his timbre, achieves an almost tenor-like freshness, which is very moving. Martineau's opening notes in Ständchen floated gracefully : you could imagine the plucking of lute strings on a warm summer evening.  Boesch has an uncanny ability to sound much younger than he is, without sacrificing the poise that comes with maturity, but what was most impressive here was the way he conveyed the innate intimacy in the songs. The words were shaded as if they were spontaneous, private exchanges. Nothing "troubadour" here. Real lovers, real feelings.

Then in flew Abschied. A farewell so early in the journey? The vigorous figures in the piano part suggest speed and forward thrust. But a clue is hidden in the last strophe.  Not all the stars in heaven can replace "Der Fensterlein trübes, verschimmerndes Licht".  Boesch shaped the phrase deliberately. Beneath the blustery surface, we glimpse once again the intimacy we heard in the first three songs, and feel the loss more strongly. When Boesch sang the first line of In der ferne, "Wehe, den Fliehenden, Welt hinaus ziehenden", my blood ran cold. Suddenly it hit me why that line spans two rhyming phrases. The two songs Abschied and In der Ferne form a pair, one pretending denial, the other unmasked grief.  Thus the logic of grouping them with the turmoil of Aufenthalt and with Kreigers Ahnung, which in the Haslinger edition comes as the second song and here forms the end of the Rellstab settings. In Kreigers Ahnung, the poet is on a battlefield.  He's afraid, his heart heavy with foreboding. And what thought gives him comfort ? "Herzliebe - gute Nacht!", sang Boesch, his voice ringing first with tenderness, then with a kind of haunted resignation, the song quietly fades, and the poet falls asleep. 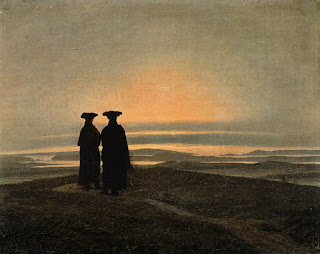 Boesch and Martineau's re-ordering of the Rellstab songs makes sense, musically and in terms of meaning, bringing out depths in the material which can be overlooked in comparison with the more sophisticated Heine songs. No-one knows what Schubert might have done, had he lived longer.  How much more of Heine would he have set ? And would more Heine have developed him as a composer, in the way that Schumann was shaped by Heine ?  Boesch and Martineau paired Das Fischermädchen with Am Meer, but the connections are deeper than images of the sea, which in any case is a metaphor for emotion, which the Fischermädchen is right to fear.  The lilting lyricism of the first song gives way to the more disturbing  undercurrents of "Der Nebel stieg, das Wasser schwoll" in Am Meer.  Boesch's voice rose for a moment before receding backwards, like the ebb and flow of a tide.  The two pairs of strophes mirror one another.  Am Meer thus flowed into Ihr Bild, with its dark piano chords and penitential pace. Ihr Bild flowed into Die Stadt.   In both texts, the imagery is almost supernatural. In Die Stadt the piano line is almost impressionistic, a painting in sound.  Only in the last verse does the mood lift, "leuchtend vom Boden empor", Boesch's voice is suddenly defiant, but the mists descend again.

Thus we were prepared for the final pairing, Der Doppelgänger and Der Atlas, first and last in the Haslinger Heine set and here heard in reverse order.  The pattern of sombre pace and short-lived protest that has gone before returns in Der Doppelgänger but hearing Der Atlas last restores the balance in favour of protest.  Martineau defined the piano part so it felt monumental, and Boesch's singing took on majesty.  Like the Doppelgänger, Atlas has lost what made him happy, and is doomed to suffer for eternity. He is cursed, but he is strong and will not crumble.   Boesch and Martineau's song order has musical and textual insight, and deserves great respect.  This is a refreshing new way of listening to a group of songs that otherwise can sometimes, in less capable performances, seem uneven.   Seeing microphones in the auditorium suggests that a recording will be in the offing, and well worth getting even if you already have rows of Schwanengesangs, or even  the previous recording Boesch and Martineau made for Onyx a few years back.  This unique performance is in an altogether different  league than most.

In the intermission before the Rellstab and Heine songs Boesch and Martineau did Grenzen von Menschheit D 716, Meeres Stille D 216 and Der Fischer D225 - which also form a mini-cyle of their own amd fit in very well with the songs that make up Schwanengesang.  At the very end, though, Boesch and Martineau found a way to incorporate Die Taubenpost, D 965 A, Schubert's setting of a poem by Johann Gabriel Seidl, which the publishers Haslinger added to Schwangesang but which has little connection, otherwise.  Boesch's face lit up in a broad grin, and he danced a cheerful shimmy before he started to sing, banishing the ghosts of loss and despair.  Yet again this made musical sense, since like Abschied, the carefree mood in Der Taubenpost belies its message : the dove's name is Sehnsucht, but, being a bird, it doesn't know what that means.