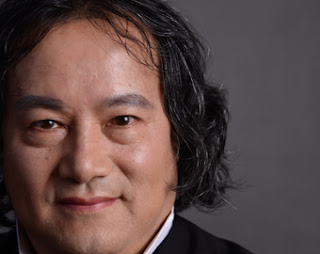 Muhai Tang and the Shanghai Chinese Orchestra have been touring Europe in a series coinciding with the Chinese Lunar New Year. Their concert at the Philharmonie de Paris is now online on the Philhamonie site.  This is serious Chinese classical music, extremely well done, light years ahead of the sort of kitsch you get on TV and in some movies. Chinese opera dates back some 700 years, pre-dating western opera. Traditionally Chinese music was chamber music for private self-cultivation or folk/popular music for entertainment.  Even opera orchestras were relatively modest, the emphasis on poetry, acting and singing.  Large-scale Chinese instrument orchestras are relatively new, going back around 100 years. But consider that western orchestral tradition didn't come into its own until the late 18th century, and the extreme cultural differences that had to be overcome, it's quite some achievement how distinctive Chinese classical orchestras can be.  All the pieces on this programme are modern works, adapting traditional themes and instruments, effectively creating an original new genre. Muhai Tang, like many of his players, is well versed in western music as well as in Chinese, which adds extra richness to performance.  So listen to this concert, and watch it, too, because the filming is musically well informed, with close up focus on playing techniques you'd never see so clearly in concert hall conditions.   You can focus on tiny, delicate sounds, like a single string reverbrating in near silence, and see instruments like the Chinese piccolo, triangle and snakeskin drums.

Appropriately, the programme began with Harmony, by Wang Yun Fei, featuring three Sheng players, followed by Wang's even more impressive Black Bamboo for long bamboo flute, pipa and erhu. The large flute has depth and volume, suggesting the gravity of bamboo trunks,  whose wood is so strong that it can be used to build ships and houses. The lightness of the pipa and erhu suggeest movement and flexibility, even a sense of gentle swaying movement, familiar to anyone who's ever seen bamboos bending in the breeze.  More imagery in Spirit of Chinese Calligraphy  (Luo Xiaoci, orchestrated by Xie Peng), with zheng soloist Lu Shasha. A small bamboo flute calls, introducing the zheng, this one with magnificent depth and vigour.   In the west, the term "calligraphy" means ornamental writing, but in Chinese culture calligraphy is an artistic form of expression. Brush strokes "speak": swift, sure figures moving rapidly across paper after a period of contemplation. Lu's playing is graceful and forceful, contrasted with the call of a small banboo flute.  My friend's mother's calligraphy was firm and independent, resembling kapok trees, whose strong lines and angles are majestic, and whose fleshy red flowers spring from bare branches. Spirit of Chinese Calligraphy is abstract, but you can hear the individuality and decisiveness in the flow. 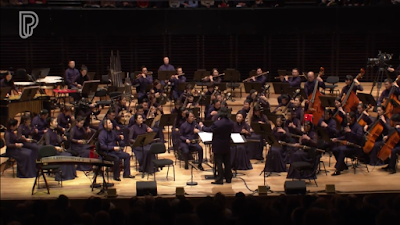 During the Qin dynastic period (221-206 BC), a concubine sacrificed herself to give courage to her Emperor in wartime. This story of love and duty is so powerful that it's inspired literature and opera. Here we heard an adaptation for modern Chinese orchestra which captures the drama.  Its ferocity suggests the saga of non-stop warfare from which the first dynasty in recorded Chinese history emerged, and its majesty suggests the splendour of the imperial court and the love affair that led to tragedy.  Three main figures form the core : pipa, jinghu and large Chinese drum.  Around them the tumult of full orchestra, complemented by westen woodwinds, celli and basses.  The pipa often resembles the sound of a human voice, so its cry is plaintive against the turbulence.   More esoteric, Caterpillar Fungus (Fang Dongqing) arranged for an ensemble of mixed plucked strings including pipas, different types of zheng and qin (large moon shape bodied lutes). Percussive effects are made by beating hands on wood.  The fungus grows on caterpillars and kills its host, though it has curative powers for humans.  Part worm, insect and plant, it is mysterious. Thus the music is hybrid, with a character that could be adapted for western strings.

The Butterfly Lovers Concerto, based on one of the most famous legends in Chinese literature, was written in 1959 by He Zanghou and Chen Gang. Here we heard an adaptation for erhu with soloist Ma Xiao hu, which I think makes it sound more natural than the better known version for western violin.  The erhu duets with the western cello, the "lovers" who cannot meet until released from mortal life. The zheng suggest airborne flight, the Chinese flute the idea of birdsong.  Dancing Phoenix (Huang Lei) features the suona a high pitched horn. Soloist Hu Chenyun calls out, from behind the orchestra, duetting with a small mouth organ : song bird and strident phoenix in a forest of strings, winds and drums, until the souna takes off with a long protracted call, the orchestra strutting in its wake. Imagine if Messiaen had heard this !

Three "Landscapes",  The Silk Road (Jian Jiping), Moonlit Lughou Bridge Before Dawn (Zhoiu Ziping)  and Wedding Celebration from Tan Dun's Northwest Suite, the first and last spiced up with regional colour, such as the evocation of Muslim music,  are eclipsed by the middlepiece  where shifting textures and tempi create a sophisticated tone poem.  Long serene lines mark the beginning, flowing string figures suggesting the movement of water and a thousand years of traders approaching Beijing.  Drums and cymbals announce a wilder, freer section whose zig zag lines could suggest the sounds of Beijing opera.  The theme then develops into a majestic swaying  crescendo broken by plaintive solo erhu, played by the Shanghai Chinese Orchestra Leader. Then suddenly it breaks off, in silence. (The attack on the Lughou Bridge marked the start of the 1931-45 invasion when tens of millions were killed and made refugees. )

Liu Changyuan's Lyrical Variation for the orchestra is even more sophisticated : a deep throated flute sings a long melody agaisnt a backdrop of quietly brushed percussion.  The western double basses play  distinctively "Chinese" sounds which merge seamlessly into the Chinese strings.  A very strong sense of structure, percussive blocks alternating with keening legato (Chinese brass and winds).   Erhus, being small, can play dizzying fast tempi. Members of the orchestra shout echoing the drums. Near-cacophony, from which another strong, swaying rhythmic line emerges   Kong Zhixuan's Flying Bees displays the virtuosity of Chinese instrument technique :  Rimsky-Korsakov's The Flight of the Bumblebee at manic speeds, changing direction and volume non-stop.  What might seem mad frenzy is in fact very carefully paced precision. Ding Long's erhu leads the orchestra : sheng, ruan, qin and a single small muffled drum join in.  Almostjam session   syncopation, played with the ease that comes from true mastery.After that dynamism, a return to more "traditional" chamber music arranged for large orchestra, in Huang Yijun's Blooming Flowers and Full Moon.  Muhai Tang gets the Paris audience to beat time : the rhythmic pulse of Chinese music is never far away. Western composers would do well to study Asian music, which offers its own aesthetic, with a structure based on rhythm and intervals, and a surprising amount of inventiveness.  Oddly enough, Tang often looks like Beethoven, if you can imagine Beethoven beaming and benevolent.   (Please see my piece on Debussy and the influence of gamelan at the Philharmonie recently, and my other pieces on Chinese music, film, culture and history, following the labels below).
at March 06, 2018