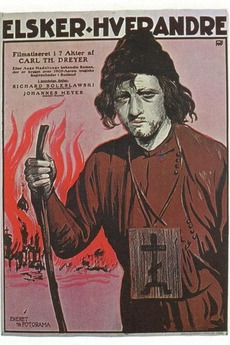 Elsker Hverasndre (The stigmatized, or Love one Another), a silent movie about pogroms in Russia, made in Germany in 1922, by Danish director Carl Th Dreyer with a mainly Russian cast, still frighteningly prescient 100 years later. Hanna-Liebe Segal grows up in the ghetto of a Russian town on the Dnieper.  For some reason her mother sends her to a Cristian school, which is odd since her older brother Jakov was cursed by their father for converting after he moved to St Petersburg and got "Russianized". When Hanna grows up she falls for a student revolutionary, Sasha, so she, too, heads off for St Petersburg.  She lives with a Jewish family since her brother is  passing for Russian.   Jakov, a successful lawyer, recognizes secret police infiltrators among Hanna's friends, one of whom is Rylowitsch, who seems to hate everyone, Jewish, radical or Christian. After smashing the progressives, Rylowitsch poses as a mad monk, whipping up fear. "The Tsar is signing your land over to te Jews!"  You'd think that might be a logical reason for dumping the Tsar, but instead, the peasants kiss icons of the Tsar and kill Jews instead.  Then, as now, populist mobs are easily manipulated. Jakov goes back to the village when his mother dies and sees a ghost in a prayer shawl, walking through doors.  Though he's a Christian, sincere enough to wear a cross, the mob kills him, too.  The village goes up in flames, many are killed. Hanna's revolutionary boyfriend returns, and the pair head off for the Polish/German border.......  Everyone's screwed when mobs run loose. Could a film like this have been made in Russia at the time ? And will such things happen again, to different communities, in different times and places ?  Though the pace is slow and stylized, there are many good moments here. The ghetto scenes were filmed in a studio in Berlin, but based on real places in the ghetto in Lublin.  Brother-in-law "Red haired Abraham" operates a machine that rocks the cradle while he works across the room.  Mama Segal lays out her daughter's trousseau though Hanna has no intention of settliung down.  The scenes in St Petersburg are in some ways even more poignant because they aren't artificial sets but real furniture and furnishings, new at the time, antique now. The family Hanna lodges with owns a keyboard iunstrument with no apparent backboard, unless it's built into the wall. Above the keys is a depiction of a lyre which must stand 2 metres tall.  A world that's  gone. Or does history repeat ? Plenty of Rylowitschs around, though they don't pretend to be monks.  Please see my other posts on early film and on Carl Th Dreyer, using the label below, including his Der Vampyr and The Passion of Joan of Arc.