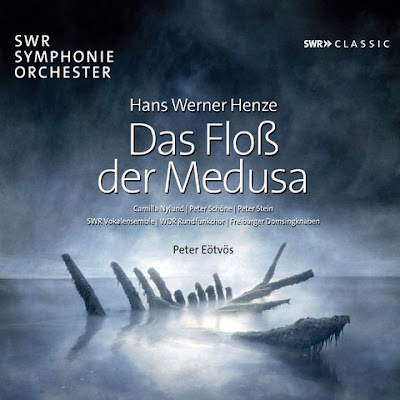 Groundbreaking new recording of Hans Werner Henze's Das Floß der Medusa. What happened at the premiere in 1968 is so well known that the story almost eclipses the music. When I read about it in the newspapers (remember them ?) I had never even heard of Henze, but vowed to find out more, so impressed was I, even then, by his integrity and refusal to dumb down. Much less impressed by those who were happy to support him to further their careers but dropped him when he became too "hot". As if they didn't know Henze's politics when they agreed to take the gig ?  If anything, we can connect to Das Floß der Medusa now with even greater committment because we've seen situations like this repeated over and over in modern times.  When I reviewed the production conducted by Ingo Metzmacher in a thoughtful  staging by Romeo Castellucci  (Please read more here), I got attacked by someone who said that refugees in the Mediterranean should be annihilated because they threaten the European way of life.  Ironic that, given that some people wouldn't have been born had their ancestors not found refuge. Henze's message doesn't dim but grows more prophetic.

This new recording of Henze's Das Floß der Medusa, conducted by Peter Eötvös, is ground breaking because the performance is, if anything, even more intense and powerful,and the all-important narration even more passionate. It has a savagery that might have upset genteel audiences sixty years ago, but which we can now appreciate, since we know only too well that the horrors Henze describes are only too real.  An essential recording, which doesn't replace the first (recorded at a rehearsal).  Please read Marc Bridle's well informed and analytical review here in Opera Today.

"...There are many things about this performance which just sound “right” – the acoustic, the clarity of the choral divisions, the spatial mystery of the work’s vision which alternates between horror and pathos. One could argue that the acoustic does little to emphasise the impact of contrast between life and death as the choruses move across the stage – this is, in one sense, an unremittingly darker performance than the one Henze gave us. Eötvös does, of course, use Henze’s 1990 revision of the score, one which tones down some of more obviously Marxist chants such as “Ho! Ho! Ho! Chi! Minh!” and there is clearly room today to interpret this oratorio beyond the events of the decade in which it was written. I think some performances of the work can still sound uncomfortable, perhaps this one doesn’t.

Peter Stein’s narrator (often the most difficult role to cast) is exceptional, but given his background this probably isn’t a surprise. This is such a nuanced, beautifully crafted reading of Charon it’s hard not to be persuaded by the mythology of the character. There is something Sophoclean about it, a depth which Henze didn’t particularly get from Regnier.
"