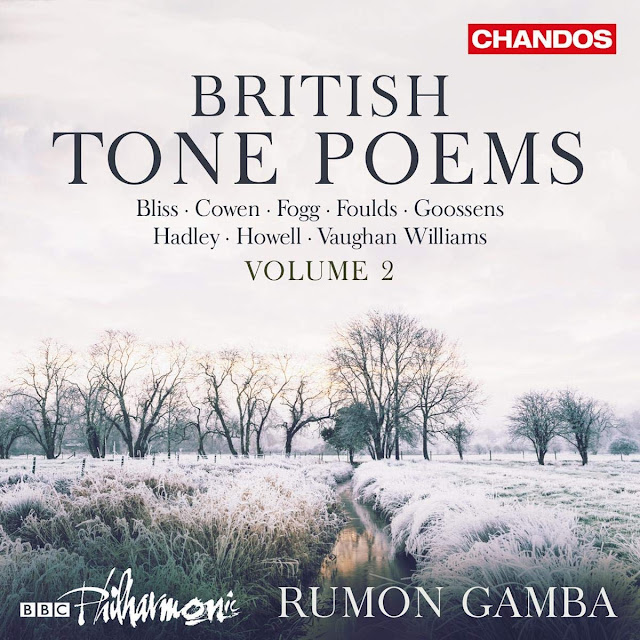 British Tone Poems Volume 2 from Chandos with Rumon Gamba conducting then BBC Philharmonic Orchestra.  The first volume (please seee my review HERE) focussed on some major discoveries, like Ivor Gurney's A Gloucestershire Rhapsody. There are treasures to be found in this set, too, such as Eric Fogg's Merok, Arthur Bliss' Mêlée fantastique,  Patrick Hadley's Kinder Scout and Dorothy Howell's Lamia.

Eric Fogg (1903-1939) was a youthful prodigy, so well regarded that the British Music Society presented 25 of his works in concert when he was just seventeen. Merok (1929, published 1934) proved so popular that it was heard at the Proms several times during his lifetime.  Fogg died young, in circumstances still unclear. Merok is a town at the head of the Gieranger Fjord in Norway.  Rustling strings introduce a simple, melody, defined by oboe. This melody is taken up by flute, then violin, then cor anglais, and oboe once again, each variation flowing lyrically with graceful eddies, before a mysterious, hushed coda. Once more the oboe sings, its timbre now graver and more mysterious. The initial inspiration might have been landscape, but the effect is magical, almost hypnotic. It feels timeless, as eternal and impenetrable as the cliffs and forests looming above the fjord.  Vernon Hadley recorded Fogg's Merok in 2005, but this superlative performance by Rumon Gamba and the BBC Philharmonic should put it firmly back on the map.
Patrick Hadley (1899-1973) was a Cambridge academic, but his Kinder Scout (1923) evokes the Dark Peak,  the highest point in the Peak District, rising above the moors, which affords panoramic views as far as Manchester and Snowdonia, when visibility is good.  Long string lines stretch, setting context for a theme on cor anglais. The probing strings repeat, suggesting endless vistas. A surge wells up in the orchesta, heralded by horns. At the conclusion, a solo violin, leading the strings to soar upward.  Perhaps Hadley's Kinder Scout was influenced by Delius's A Song of the High Hills, which Hadley knew well, though, being the work of a very young man it is far less ambitious. It's moving, nonetheless, and a finely-honed miniature.

Dorothy Howell (1898-1982)'s Lamia (1918) was premiered at the Proms by Sir Henry Wood in 1919, and repeated several times, as recently as August 2019, conducted by Mirga Gražinytė-Tyla.  In the poem by John Keats, Lamia is a siren, half woman, half serpent, who lives in the ocean.  She falls in love with a mortal, and he with her, but their love is doomed.  The "maritime" character of Lamia is described in swelling lines, which surge and retreat like the tides. There are erotic undertones, too, vide Tristan und Isolde. Sparkling figures - Lamia playing on the waves ? - give way to murkier undercurrents. The second section is more turbulent, underlined by dramatic brass and rumbling percussion.  Then an interlude of delicately scored reverie, winds singing above hushed strings, a brief respite before the full orchestra surges once again - very high timbres in the strings and winds, before a poignant diminuendo, where a violin plays, alone. The pace picks up, drawing together different threads - elusive figures, surging lines, stronger cross currents - before dissipating into gloom, from which the violin plaintively calls.

Fogg, Hadley and Howell were all young when they wrote their respective pieces heard here.  Hadlery went on to write other works such as the cantata The Hills (1934), but Fogg died early and Howells retired from composing.  Given this context, the inclusion of  very early work by Ralph Vaughan Williams gives perspective. Harnham Down, the second of Three Impressions for Orchestra, dates from 1904, but was later withdrawn, receiving its first recording only in 2013, through the Ralph Vaughan Williams Society's specialist label, Albion. As Lewis Foreman notes, this piece contains "the composer's fingerprints, already reecognisable : the spacing of the string orchestras in its earlier   entry, the woodwind solos and the poetuc fade-out at the end".  It's also relevant that  the score was prefaced by a stanza from Mathew Arnold  which would be referred to in An Oxford Elegy, and that the evocation of Wiltshire would find fruit in Vaughan Williams' Symphony no 9.

Also on this recording are three other short tone poems : John Foulds' April-England  Op 48 no 1 (1920, orch. 1932), Eugene Goossens By the Tarn Op 15/1 (1916)  and Frederic Hymen Cowen's Rêverie (1903), but the set concludes with Arthur Bliss Mêlée fantastique (1921, rev. 1937) . In his youth, Bliss was avant garde, responding to the creative liberation of the 1920's and to developments in European music. Please see my article Things to Come - Arthur Bliss and Futurism. The influence of Stravinsky is clear in the rhythmic daring and pounding staccato. This is music meant to be danced to, its energetic verve feels "physical", as if crying to be choreographed. Each section is brief, yet distinctive, as in a ballet, the larger tutti segments suggesting a corps of figures leaping and running. Fanfares and exuberance, contrast with swirling strings.  Low timbred brass and winds introduce darker textures, cut short by forceful single strokes on timpani.  Bliss wrote Mêlée fantastique in memory of his friend Claude Lovat Fisher, a painter and theatre designer, influenced by designers like Leon Bakst and the clean lines of modernism, who died young, hence perhaps the terse ending.  Vivid performances all round from Rumon Gamba and the BBC Philharmonic.Orchestra, very much in the innovative spirit of these works from the years of change, around and after the Great War.