Saved by good musicianship - Last Night of the Proms 2019 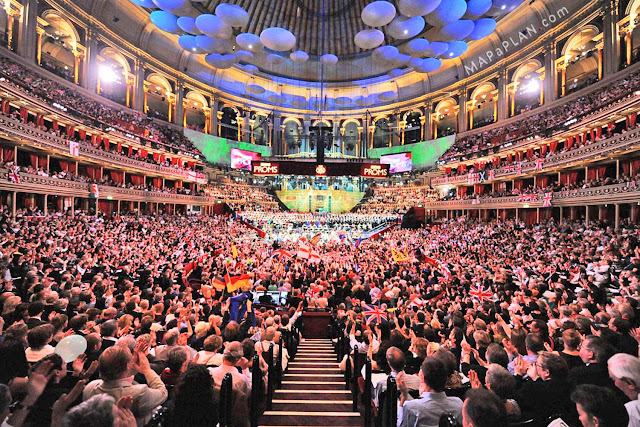 Last Night of the Proms 2019 - a wild night out, as usual, where music isn't really the point.  But we still care, and with Sakari Oramo conducting the flagship BBC Symphony Orchestra, we could count on good playing  and some musical excellence. Oramo's good nature makes him a natural communicator, so he's a good compere too (better than most BBC presenters). "In an age of social media attention spans", he said "it's good that audiences can enjoy live concerts". Thank goodness for that. But one wonders if these days, LNOP is not about music at all.

A few years back, Arron Banks, the millionaire with "interesting" non-British connections and no known musical background, tried to swamp the LNOP with free Union Jacks.  Which the Prommers largely rejected,  making their sympathies clear. After all, music is international, and without freedom of movement British musicians couldn't work abroad, nor international musicians enter.  If Parliament can be prorogued to curb the normal process of democracy, can the BBC stand up to political pressure?  Its promotion of Farage did him no harm, whatseover. Rupert Murdoch must be very pleased. This year the stage and balconies of the Royal Albert Hall were festooned with Union Jacks - not placed by prommers but by those who want control.  Patriotism is a good thing but political manipulation is not.  Isn't the Union Jack supposed to stand for Union ?  Don't Scotland, London and indeed millions of others who don't support extremism matter anymore ? A fait accompli, like a coup.

There were some compensations, though. Daniel Kidane's Woke, was actually good as music.  Many LNOP commissions, even by top composers, are somewhat perfunctory, but this had substance.  An inventive sound palette, with exotic sounds, building up to a panorama which felt full of incident and imaginative detail.  Dominant chords gave the piece a firm framework, and distinctive character.  Nice depth of texture, too.  At the top, high timbres flew freely, supported by elusive wind figures, lower winds, brass and strings providing bedrock.  Lots of development too - in the quiet section mysterious background sounds enhance the main theme. The finale was gorgeous, building up to a full throated, affirmative tutti.  Kidane has written about the concepts behind the piece which are perhaps even more important in a Britain that's become increasingly intolerant of diversity.  Woke is good enough that it stand on its own terms.  The real problem with society is that it's based on a system that promotes inequality.  The lack of musical education in school doesn't help either,. Indeed a good school system would help a lot in combatting ignorance.  Instead we now live in times when racism is mainstream. Years ago, I watched Gordon Laing, a great basssoonist, walk towards the Royal Albert Hall, carrying his bassoon case, an object non-musicians might mistake for something sinister. Plus, he was wearing a  hoodie and slouch pants. A white guy might not have worried, but let's face it,  statistically not being white gets you into trouble even when you're doing nothing wrong.  Let us never be complacent. 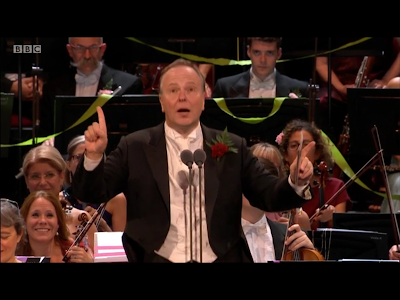 Oramo conducted an exuberant suite from Manuel de Falla The Three Cornerd Hat, again establishing musical credentials.  Laura Mvula's Sing to the Moon has been heard three times at the Proms, here in an a capella arrangement for the BBC Singers and Chorus. Then, Elisabeth Maconchy's Proud Thames, commisioned for the Coronation: a well crafted piece, horns and winds over swirling strings, and blows of timpani.  A strong current - like the Thames - flowing through the countryside to a London then full of hope and optimism.  It worked well with Elgar's Sospiri op 70 completed on the verge oif the beginning of the 1914-1918 war.  The strings ma y seem peaceful, but as so often with Elgar, there's an underlying mood of tension,which Oramo and the BBC SO picked up on. Though the strings and harps and organ might suggest serenity, the piece isn't subtitled "Sighs" for nothing.

But the "new" Proms priorities came to. the fore with Jamie Barton, for whom the BBC Publicity department seems to have pulled out all the stops. The Habanera from Carmen is so popular that it will always thrill a crowd, as did the hit numbers from Samson et Delilah and Verdi Don Carlos. But one wonders what the reception would be from opera house audiences used to full operas and more demanding standards. Big voices always appeal, but phrasing, controlled vibrato, intonation, and subtlety are important too. When she sang Over the Rainbow from The Wizard of Oz, the RAH crowd went wild, but I kept thinking of Joyce DiDonato, who sang it with such fervour and finesse that her performance felt like a truly historic moment, elevating the piece from song to anthem.  The Triumphal March from Aida restored the balance, extremely well done, especially considering that Oramo and the BBCSO, the BBC Singers and Chorus don't do a whole lot of opera.

More good music after the interval, too, with the Overture from Offenbach Orpheus in the Underworld (wonderful violin !)  and Percy Grainger's Marching Song of Democracy for wordless chorus which is a novelty for good reasons, I suspect.  At last, Sakari Oramo introduced the party part of the Last Night of the Proms. "Let's go !". The perennial Fantasia on British Sea Songs (arranged by Henry Wood), played at gloriously manic pace, Thomas Arne's Rule, Britannia! arranged by Malcolm Sargent,

Elgar's Pomp & Circumstance March (Land of Hope and Glory)  and Jerusalem in Elgar's arrangement of Hubert Parry, with the National Anthem arranged by Benjamin Britten. .No matter how many times we've heard these same pieces, they come alive again when performed as well as this.