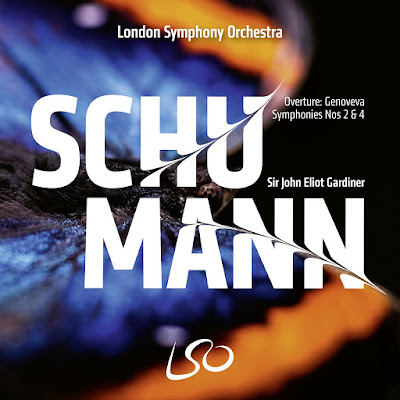 Sir John Eliot Gardiner conducts Schumann's Symphony no 2 in C major, Op. 61 (1847) and Symphony no 4 in D minoir (Op 120) with the London Symphony Orchestra, now available on the LSO label. In the past few decades, there has been a sea change in the reception of Schumann's music, particularly of the later works and of the symphonies. Schumann died young, just as Wagner's reputation was in the ascendant, a factor colouring public reception. Imagine if Schumann had lived to counterbalance Wagner ?

In more recent decades, there has been a sea change in Schumann reception,  based on a greater appreciation of the composer's influences and the aesthetic of his time. This focuses on Schumann's individuality and true originality, his later works and the symphonies benefiting from more sensitive performance practice.  Gardiner's approach highlights the energy in Schumann, deriving from the values of individuality and freedom that characterized the Early Romantic period.  At the Barbican, Kristian Bezuidenhout. playing a pianoforte from 1837 by Sébastien Érard, with leather hammers covered in felt, very similar to the instrument Mendelssohn used, demonstated sounds that affected the compositional process.  "There is a textural topography to these instruments" he said "Every register has a characteristic voice....moving from bass to tenor, and above, where the piano sounds similar to the harp".  Hence the brighter, livelier textures, and "singing" lines, agility and flexibility that characterize the approach which Gardiner and more recent conductors value in Schumann.

Here Gardiner presents Schumann's symphonies framed in the context of his Overture to Genoveva (Op 81, 1850) which Schumann started writing in 1847, around the time that his  Symphony no 2 in C major (Op 61, 1847) was completed. The original folk tale on which Genoveva is based dates back to the Middle Ages. Indeed it’s the basis of stories like Snow White ! In legend, Genoveva lived in the forest, protecteda by animals and by her virtue. Significantly, though, Schumann rejected the medieval concept, choosing instead to base his opera on Friedrich Hebbel’s more psychological drama, published only four years previously. Schumann wanted a “modern” take on the story, possibly exploring a new form of music theatre, as he was doing with works like Die Paradis et das Péri and Szenen aus Goethe's Faust.  As Hebbel said “Any drama will come alive only to the extent that it expresses the spirit of the age which brings it forth”.  Gardiner creates the inherent drama in the piece and its very non-Wagnerian transparency.  The glowing colours build up like a chorale, then into the themes in the opera, before the final fanfare, in the way that successive proscenia in a theatre add depth to a flat stage.

In Schumann's Symphony no 2 Gardiner shaped the brass, without stridency, the "brassiness" muted and dignified, integrating well with the bassoons, winds and strings. How poignant the horns and winds sounded, evoking Nature, hinting at the forest imagery so close to the heart of the Romantic imagination.  The Scherzo is particularly animated, notes seeming to fly in fiendishly complex patterns, though sharply defined.  A delicate yet purposeful Adagio, Gardiner bringing out details  which reminded me of the strange enchantment in Mendelssohn's A Midsummer Night's Dream.  A brave, afffirmative last movement, undercut by the moody bassoon from the Adagio, which Schumann told a friend was the point at which he heard his "half sickness" calling him.  Nonetheless, the composer had a "special fondness"  for this strange melancholy, which infused even the happiest moments of his life. Wisely, Gardiner understands why serene passages mix with quirky moments : smoothing them out would diminish the personality in the music, and in the composer himself.

For Schumann's Symphony no 4, Gardiner chose the original 1841 version rather than the published version of 1851.  The first version was panned by critics at the time, while the revision, more audience-friendly, proved more popular.  Given Gardiner's emphasis on Schumann's originality, this was a wise choice.  The raw energy in this performance is thrilling - Schumann without censorship, so to speak.  In the first movement, andante moves swiftly to allegro, ending with emphatic punch, makingthe transition from major to minor in the Romanza even more unsettling. The oboe-cello melody may be a form of love song  since this was Schumann's Liederjahre, a period of happinesss and creativity, after years struggling to win Clara.  Here, it feels shaded by melancholy, echoes of  Dichterliebe mixing joy with anxiety, the violin melody offering tantalizing hope. In the Largo, magnificent long lines are briefly interrupted by brisk dotted rhythms, before low timbred brass signals change.  The dichotomy of long chords and brisk notes is resolved in a vivid Allegro vivace, which here marches, then hurtles exuberantly to a flourish.  In the live concert, Gardiner didn't pause between movements, so the symphony flowed freely, connecting themes giving shape to the whole, as inspired as Schumann must have felt in that year in which his creative powers surged without restraint. Gardiner has performed and recorded Schumann's symphonies many times,  and this latest release, with the London Symphony Orchestra shows how well they respond to his dynamic approach.