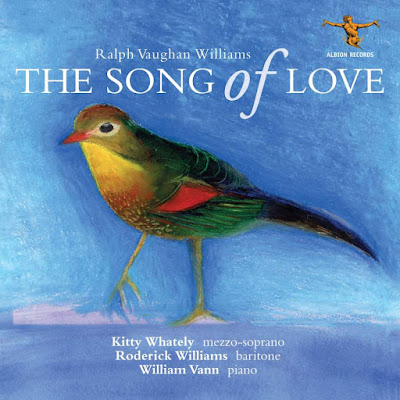 Though the full cycle of The House of Life is now nearly always heard with male voice, even with bass-baritones, the premiere was given at the Wigmore Hall on 2nd December 1904, in the presence of Vaughan Williams himself, with Edith Clegg, a contralto, accompanied by Hamilton Harty. Some of the songs, to sonnets by Dante Gabriel Rossetti,  have texts that suggest a man addressing a woman, such as Love's Minstrels and Heart's Haven, but the others four are gender-neutral. Indeed, Silent Noon, one of the best loved of all Vaughan Williams' songs, lends itself particularly well to the female voice. The warmth in Whately's timbre enhances the image of high summer langour, where "hands lie open in the long fresh grass", the piano gently palpitating.  Whately breathes tenderness into the phrase "All round our nest, far as the eye can pass, are golden kingcups fields with silver edge"  One can almost feel the vista, and endless horizons.  But the "visible silence, still as the hourglass" cannot last. "Deep in the sun-searched growths the dragonfly hangs ......" Dragonflies die, their splendour brief and doomed. Whately's voice seems to hover, making the passionate final declartion ever more poignant. "O! clasp we to our hearts, for deathless dower". The final phrase "the song of love" (hence the album title) can be a little too high for some male voices, but poses no problems for a mezzo-soprano. Though the cycle is The House of Life, the texts deal with Death, often as a strange visitor, as in Death-in-Life, but the overall impact, given the understatement of Vaughan Williams' settings, suggests that happiness, and life, must be cherished while it lasts.

In the Three Old German Songs (1902) Vaughan Williams explored medieval German song, capturing an archaic nature rather different from folk song, German or English.  The setting of To Daffodils on this set comes from a manuscript found at Gunby Hall, which the composer visited regularly. This differs from the 1895 setting of Robert Herrick's poem in that the short lines ebb and flow from quietness to climax, much like Vaughan Williams' Orpheus and His Lute (1903),.  In the Four French Songs, from 1903-4, Vaughan Williams sets medieval French song, Quant li Louseignolz, for example rather than "Quand le Rossignol", a song with connections to knights who took part in the Crusades. Thus the studied "medieval" formality. Roderick Williams has no peer in English song, though his French is less idiomatic, but he's a natural communicator. Here, his delivery brings out the special qualities in these songs, with their stylized formality, very different from folk song and indeed from later French song. There may well be a connection between these songs and Love's Minstrels in The House of Life, with its "modern" take on medievalism.

With Buonaparty (1908) Roderick Willliams is back on home ground, his delivery animated, crackling with character. This is one of Vaughan Williams’ only two settings of Thomas Hardy's poems though, as we know from his Symphony no 9, he knew Hardy's Tess of the d'Ubervilles and the evocations of Wiltshire and Wessex.  Perhaps the composer didn't warm to Hardy's other values. Gerald Finzi, who did understand Hardy's irony and lack of deference, set more Hardy than anyone else. Finzi's setting of Hardy's Rollicum-Rorum quite explicitly satirizes populist war mongering.  Roderick Williams' Finzi settings of Hardy are essential listening, not only for the dynamism of his performances, but for what he reveals of Finzi's feel for Hardy as iconoclast.  RVW's Buonaparty was intended though not used for Hugh the Drover. It's robust, with a jolly refrain, but not specially perceptive.

With The Willow Song (1897), followed by Three Songs from Shakespeare (1925), Kitty Whately sings some of Vaughan Williams’ settings of Shakespeare. This version of Orpheus and His Lute is  almost neo-classical, its refinement more subtle than the better known earlier version.  With The Spanish Ladies (1912) and The Turtle Dove (1919-1934), Roderick Williams returns to classic Vaughan Williams, the first based on a sea shanty, the second on an old ballad collected by the composer from a traditional singer's performance at the Plough Inn, in Sussex in 1904 . These set the context for Two poems by Seumas O'Sullivan,The Twilight People (1905) and A Piper (1908)  published in 1925, when the composer was working on Riders to the Sea. O'Sullivan was the pen name of James Sullivan Starkey, a Dublin journalist. The plaintive lines may reflect Vaughan Williams' knowledge of Ireland, through the prism of W B Yeats and J M Synge.  Whately and Williams conclude with two duets based on German folk songs, in English translation, Think of me and Adieu.  Though Albion recordings cater to a very specialized market, this set is very well planned and performed : a good introduction for those wanting to delve deeper into Ralph Vaughan Williams and the sources of his inspiration.
at September 18, 2019