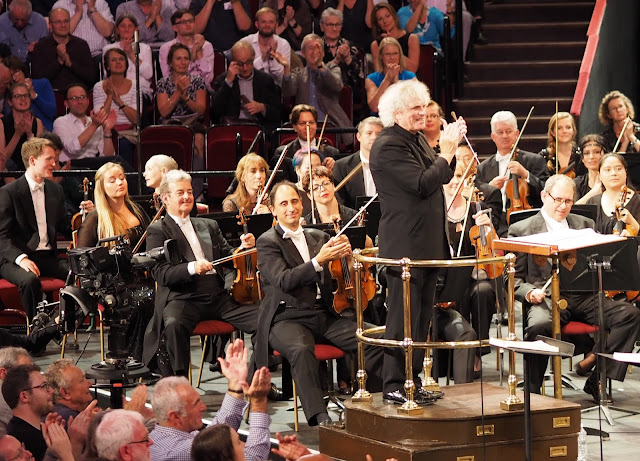 Sir Simon Rattle conducted Messiaen Éclairs sur l’Au-delà with the London Symphony Orchestra at the Barbican, London, an even bigger occasion for some than the previous night's season opener, an all-British gala featuring Emily Howard, Colin Matthews and William Walton. (Please see Robert Hugill's review here). Rattle's British music credentials are very strong indeed. He's close to Matthews and has done lots of Walton. (Please read my review of Rattle conducting Walton's Belshazzar's Feast with the LSO just a few weeks ago). Rattle's committment to Olivier Messiaen is even stronger. British audiences took to Messiaen very early on, to the extent that he's influenced British music (think George Benjamin)  and Rattle was one of the first to bring Messiaen's larger scale works to mass attention. He conducted Éclairs sur l’Au-delà when he was with the City of Birmingham Symphony Orchestra (his recording is one of the better ones, bar Myunwhun Chung, both eclipsing by far Zubin Mehta's prosaic approach). Later he did Éclairs sur l’Au-delà with the Berlin Philharmonic Orchestra.  Quite probably Éclairs sur l’Au-delà  is a Rattle signature piece not only because he likes doing it but because he understands Messiaen's unorthodox sensibility. With Messiaen, you need to share Messiaen's wonder at the miracle of life, and value the humility (and humour) behind the majestic extravaganzas.

Not for nothing does the traverse begin with the Apparition du Christ glorieux where long brass lines stretch as if into infinity. Rattle makes them glow : think of the rays of light which illuminate images of Christ risen from the dead.  Literally, lightning over the world. To a practicising Catholic like Messiaen, that's the central message of faith : "For God so loved the world he gave his only-begotten Son". Hence the shimmering but steady pace, firmly defined, without sentimentality. This section is amplified by the two which follow, La constellation du Sagittaire and L’oiseau-lyre et la ville-fiancée. One evokes the constellations in the universe, with powerful chords whose metallic resonance suggests great distances and things not of this earth, preparing us for the lively dance of the lyrebirds. Messiaen's use of birdsong is not novelty, but rooted firmly in his core beliefs about the cosmos. Birds, he said, descended from dinosaurs, and have been on this planet longer than man. The thousands of species attest to the variety of evolution.  Jerky, quirky figures, darted at wild angles : the movement of birds, closely observed by an man who spent his life learning from them - yes, learning, for Messiaen was humble. To him, even the smallest  and most vulnerable creatures had value because they reflected the Creator's love for the pure and fragile. Rattle understands the freedom and originality in this music and the way it transcends conventional form. Messiaen's students were taught to think for themselves and to create, not to be tied to rigid formulae.

In Les élus marqués du sceau, referring to the Book of Revelation and its prophecy of survival in the Apocalypse. Nothing triumphalist here, for Messiaen or for Rattle. Swirling textures with bittersweet details. The serenity of Demeurer dans l’amour suggests redemption to come.  Nothing "romantic" in this love, for it is divine love, between mankind and a higher power.

The fanfares of  Les Sept Anges aux sept trompettes represent the seven angles with seven trumpets who appear at the End of Time, when the earth is rent asunder.  Wooden, hollow, metallic sounds, thudding percussion, crashing gongs. Rattle understands the conection between Éclairs sur l’Au-delà  and Et exspecto resurrectionem mortuorum, another work which he has conducted memnorably many times.  (Please read my review of one Rattle performance, though I've written extensively on the piece). This gives context to the next section, Et Dieu essuiera toute larme de leurs yeux.  From near silence, the sound of birdsong in the winds, and rustling vibrations in the strings.  (Remember the symbolism of birds to Messiaen). A vaguely hymn-like anthem on horns was cut across by the liveliness of the solo flute, sparkling with freshness and freedom.  The birds in this section refer to the idea of evolution, dinosaurs being reborn as birds. A tender, loving performance by the LSO principals.

After this interlude, Messiaen returns to the heavens with Les étoiles et la gloire, in their majesty, and then back to the birds with Plusieurs oiseaux des arbres de vie.  From the lowest timbres in the orchestra came brighter outbursts, exploratory figures growing in confidence, cheered by tiny bird-like figures in the winds and percussion (songs and darting rhythms).  Typically Messiaen zany exuberance.  The reference in Plusieurs oiseaux des arbres de vie is to the image of Christ and the Tree of Life, filled with birds : an image of growth and renewal, shelter and abundant life.  Again, humour, with a  slightly comical passage, which may perhaps represents the ghosts of clumsy dinosaurs, now born again.

With the drama of Le chemin de l’invisible, the symphony continues on its journey. And a symphony it is, despite its eleven sections which together form a traverse towards a resolution.  Angular, wild rhythms, like the movemnts of many birds rushing en masse, fanfares and long, circular arcs suggesting ebb and flow. Rattle doesn't lose sight of the destination. The lush textures were propelled by a sense of movement, unrushed but untoppable. Éclairs sur l’Au-delà was Messiaen's last major work, written as he approached the end of his life. This affects interpretation : miss this and miss the whole point.  Ever a realist, Messiaen understood mortality, but, imbued by faith, he contemplated the future. Unlike Et exspecto resurrectionem mortuorum which ponders the fate of mankind, Éclairs sur l’Au-delà is personal : a man facing what is to come to all, no matter how exalted. That's why I like Rattle's Messiaen, because  it's human scale, and humane. Le chemin de l'invisble ends with a crash but leads to Le Christ, lumière du Paradis, with which Éclairs sur l’Au-delà  began.  Full cycle, alpha and omega. This structure matters, given Messiaen's faith.  No-one wants to die, everyone worries about the unknown and leaving those one loves, but Messiaen drew comfort from the idea that death is not an end but a kind of rebirth, and union with God.  In the serenity of this final section, the long lines evoked eternity, horizons without end. The LSO strings seemed to shimmer with a preternatural glow, Rattle always aware of the transfiguration that would have meant so much to the composer.  Whatever ones' own beliefs, this is powerfully spiritual, and Rattle's approach deeply convincing.