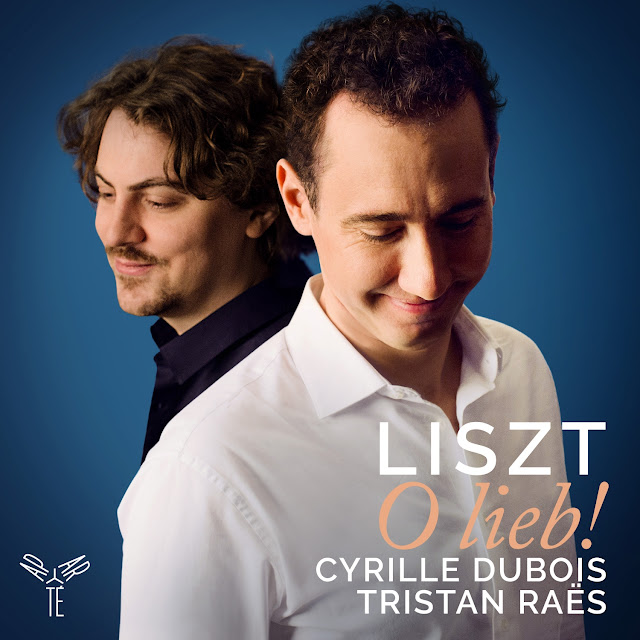 O Lieb ! The Lieder of Franz Liszt with a distinctive spark from Cyrille Dubois and Tristan Raës, from Aparté.  Though young, Dubois is very highly regarded. His voice has a luminous natural elegance, ideal for the Mélodie and French operatic repertoire he does so well.  With these settings by Franz List, Dubois brings out the refinement and sophistication of Liszt's approach to song.  Liszt's transcriptions of Schubert Lieder develop the piano part with greater elaboration than Schubert's originals where naturalness is of the essence. Liszt's own songs and Lieder reflect the the international circles he moved in and the more "modern" times he lived in. As Dubois and Raës explain, "Liszt’s ardour and expression resonate with the youthful nature of our duo, just as his music, so demonstrative and accessible, answers the tumult of our troubled times".

This is demonstrated in Die Loreley, second version, LWS273 (1841), to the poem by Heinrich Heine, and possibly one of the most beautiful Lieder ever written.  The structure is dramatic : almost an opera in miniature, the piano evoking the richness of an orchestra.  The first motif rises like an overture, the repeat softer, descending as if from some rocky height to the river below.  "Ich weiss nicht, was soll es bedeuten" his voice delicately restrained, so the words "Ein Märchen aus alten Zeiten", are infused with a sense of wonder. Near-declamation turns to lyrical warmth. "Die Luft ist kühl, und es dunkelt, Und ruhig fliesst der Rhein" the melody dances : the music evoking the flow of the river., complete with sparkling figures and the repeating phrase "Die Loreley".  On the short phrase "Im Abendsonnenschein", Dubois shapes the dramatic crescendo, expreessing the thrill the poet feels as he sees at last the lovely maiden combing her golden hair. The line "Sie kämmt es mit goldenem Kamme" is repeated twice, each time with difference emphasis, a pattern that runs through the whole piece. Enchantment turns to horror, as the poet sees the sailor in his boat dashed upon the rocks. Rolling figures in the piano part descend, like engulfing waves. Tristan Raës low pedallin exudes menace.  After the tumult, an eerie calm.  Is this the spirit of the Loreley herself,  innocently oblivious to what has been done ? The song ends with the line "Die Loreley getan!" repeated, the last taken with tessitura so high that it seems to soar to the skies.

Liszt's Three Petrach Sonnets (Trois Sonnets de Pétrarque) (1st version, LW N14/S270-1, 1846) (S270/1 1842-6) are extremely well known, and here receive superb performances, making this recording a recommendation for admirers of the composer. "E nulla stringo, tutto l'mondo abbracio" sang Dubois. His poise is superb - this is how rubato should properly be used. He breathed into "i sospiri e le lagrime e 'l desio" so it seemed to well up from deep within.  Raës sculpted the piano line, as firm as marble. Surprisingly, Liszt only wrote two other songs in Italian.  Angiolin dal biondo crin (2nd version, LW N1/S269-2, 1856 Cesare Boccella) is a lullaby for Liszt's daughter Blandine, then 4 years of age, a little angel with blonde hair. The Marquis de Boccella was a family friend of Liszt and Marie d'Agoult.  Thus the tenderness and intimacy of Dubois' delivery, Raës' piano like an embrace.
at October 09, 2019