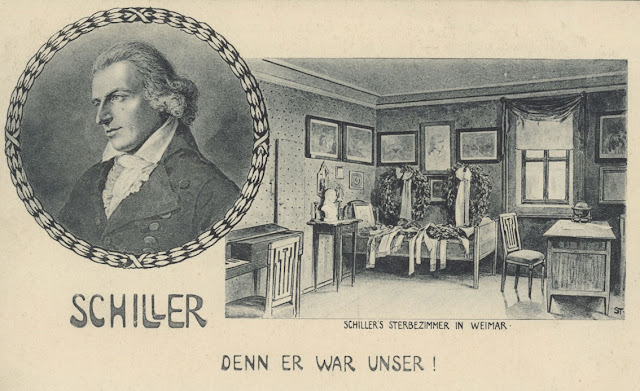 Franz Liszt : Vor hundert Jahren (1859) highlight of Kirill Karabits’ tribute to Friedrich Schiller.  In these modern times when the world seems hell bent on denigrating intellect, we neeed Schiller more than ever.  Schiller's importance in modern culture cannot be underestimated.  To him, even more so than to Goethe, we owe the philosophical framework of freedom and democracy. Vqalues that matter in increasingly authoritarian times. Full marks to the Bournemouth Symphony Orchestra for having the courage to start their new season with this truly inspired programme : Hummel Freudenfest Overture, Liszt Kunstlerfestzug, Liszt Vor hundert Jahren and Richard Strauss Suite on Rosenkavalier.  Bournemouth raising the bar for all Britain : will other orchestras dare meet the challenge ?

Johann Nepomuk Hummel's Freudenfest (Overture for orchestra in D major (S148) is based Hummel's overture to Die gute Nachricht (op 61, S103) written to celebrate the defeat of Napoleon in 1814, a collaborative piece with contributions from  Beethoven, Adelbert Gyrowitz, Georg Friedrich Treitschke and others. 1814 was a defining moment in German history. Germany then did not exist as a nation, but a conglomerate of 300 or so different territories.  The Wars of Liberation united thinkers, artists and activists across state boundaries. Thus was born the idea of Germany as a nation, inspired by the ideals of the Romantic Revolution, which owed so much to Schiller.  Please read my piece HERE on the Lützowsches Freikorps and their connections to Schubert, Beethoven and much more.  Hummel's Freudenfest flows with energy, light woodwinds flying above the orchestra : a military march, but fleet-footed and joyous. Quotations of the anthem God Save the Queen abound, Britain at that time being perceived as a bastion of democracy.

Franz Liszt Vor hundert Jahren combines poetry, philosophy, history, music and theatre. This kind of intellectual hybrid was popular at the time. Imagine Berlioz and Schumann without spoken narrative - so modern audiences just have to stop thinking only in present day terms.  The form goes back to the allegory dramas of the 16th and 17th centuries. As Stravinsky said "To be a good listener, you must acquire a musical culture.... you must be familiar with the development and history of music, you must listen". Don't sneer at what might be different to what you expect, but listen where things are coming from (Please read more here).

Vor hundert Jahren is music drama, unfolding as a series of tableaux, illustrating aspects of Schiller's life and works. The text by Friedrich Halm, an Austrian dramatist, was heard here in English translation by Richard Stokes. In the first scena, a processional march introduces a succession of artists. Not militarists, but artists and intellectuals !  The harp and clarinet melody, reiterated by strings and muted brass, suggested refinement, not brutality. The pace speeds up with mounting excitement, punctuated by percussion exclamation marks ! Germania (Sara Kestelman) recounts the horrors of the Thirty Years War, which tore German nations apart : millions were killed, some areas depopulated.  This apocalyptic horror is the context behind the dream of peace and unity. "Who shall save Germany's name and when its neighbours houses are ablaze?"  Poetry (Jemma Redgrave) prophecises that "self-inflicted sorrow" will be replaced by a "magic circle of love around the defiant hearts of (Germania's) children..... Salvation is a great human being is presently will greet my enraptured heart."  Horns and strings usher in the "Song of Destiny", a vision of hope embodied in the person of Friedrich Schiller, depicted in his simple cradle. "He shall live not long, but eternally" the Three Graces chanted in unison. "A master of words, a lone individual but yet an entire army". "The region that begot the Hohenstauffen and the Hohenzollern begot him too ....but Swabia has a mother's claim".  Schiller's Ode to Joy, in Beethoven's setting begins to grow and swell.

Germania speaks of the struggles Schiller will face before he returns to Germany, purified. Another almost cinematic prelude sets the stage for the next phase in Schiller's journey to artistic maturity. Since the piece was meant to be staged, one can visualize a non-speaking actor playing Schiller striking heroic stances, surrounded by figures whom audiences in Liszt's time would have been able to identify.  Simon McBurney created a semi-staging for this performance : knowing his style, it would have been intelligent and well informed. Another interlude, alpine -sounding horns and cowbells suggesting Switzerland, and Schiller's hero, William Tell, whose bravery helped his nation to independence.  Its mountains and clear air were also symbols of the lofty ideals of the Romantic revolution.  The Ode to Joy swells up again in the orchestra. "Immortality!" says Poetry, "Let one phrase echo in every heart : He was a German and we are German!" A resounding coda. Liszt's  Vor hundert Jahren is fascinating as a missing link in the development of music theatre. Much more than a novelty, it captures a unique sensibility which modern audiences might not get at first, but could warm to if they appreciate its background.

After the interval Richard Strauss's Suite from Der Rosenkavalier, Karabits conducting a scintillating performance.  Subversion and freedom from authoritarian scam, disguised by elegant "silvery" light.  Even now many people don't get Strauss, and don't understand his self-deprecating humour : but he, too, was a revolutionary in his own way.    Listen to this most rewarding programme here for 28 days.