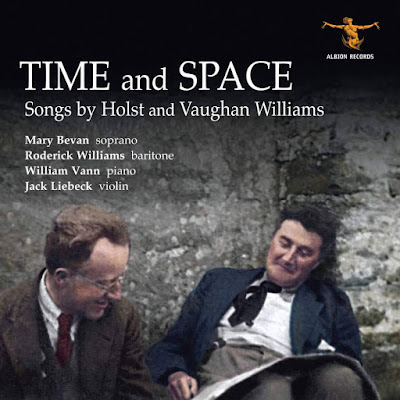 Time and Space - songs by Holst and Vaughan Williams, with Mary Bevan, Roderick Williams, William Vann and Jack Liebeck, new from Albion, highlighting the close personal relationship between the two composers. As the label is an offshoot of the Ralph Vaughan Williams Society, its choices are eclectic rather than mainstream, but illuminate aspects of Vaughan Williams' life and work which might not otherwise be covered in mass market releases. While Albion's first collection "Heirs and Rebels" presented archive recordings of well known songs by Holst and Vaughan Williams, the choices on this recording places less familiar songs - some unpublished -  by each composer beside each other for comparison and also their settings of the same texts.

Holst's fascination with visionary themes can be glimpsed in "Invocation to Dawn", from Holst's Six Songs Op15 H68 (1902-3). This was the first of his settings of his own translation from Sanskrit.  It's contemporary with his The Mystic Trumpeter (1904 rev. 1912), and works like Savitri Op 25 and the Choral Hymns to the Rig Veda Op. 26 (1908-12). While neither Holst nor RVW were conventionally religious, the ardent vocal line and rolling piano part in this song connects to transcendental themes prevalent in that era.   Holst includes three settings of Thomas Hardy, "In a Wood", "Between Us Now",  and "The Sergeant's Song", which text Vaughan Williams also used in Buonaparty (1908), which can be heard on the recent "The Song of Love" album, also from Albion. (Please read my review here). Holst's version is animated, more attuned to the irreverent satire in the poem, with Roderick Williams at his idiomatic best.  The suppressed passion in "I will not let thee go", to a poem by Robert Bridges might remind some of Vaughan Williams’ Silent Noon, from 1904, though Silent Noon is by far the masterpiece.

A E Housman verses inspired Vaughan Williams On Wenlock Edge (1909), and also Along the Field (1925-7). These songs, set for high voice and solo violin (Mary Bevan and Jack Liebeck) are exquisite studies in minor key modality, so refined that they seem to hover in  mystical trance.  In "We'll to the Woods No More", the vocal line stretches, with seemingly little dynamic variation,  mirrored by the violin.  But perhaps that is the point : the mood is so elusive that the song floats away, like a ghost.  "Along the Field" develops the mystery. The plaintive vocal line suggests  plainchant, or possibly vespers, for the lovers will soon be parted by death. The leaves of the aspen tree know what lies ahead but cannot  speak. "And I spell nothing in their stir" sings Bevan with hushed deliberation. Even the relatively cheerful "In the Morning" is melancholy, and "The Sigh that Heaves the Grasses" drips with portent.  The violin part in "Good-Bye" is subtly discordant, picking up on the unspoken emotions of the lad so abruptly dismissed by the object of his affections.  The text of "Fancy's Knell" resembles "Clun" from On Wenlock Edge, though the wordier scansion of this poem doesn't invite quite such a strong setting. The set ends with "With Rue my Heart is Laden", also set by George Butterworth, Vaughan Williams' version even more aphoristic and enigmatic. Although these songs are usually heard with tenor, the silvery timbre of Bevan's voice, in my opinion, enhances their strange, surreal magic. This perfomance is so beautiful that it makes this recording an absolute must.

Two settings of A Cradle Song to a text by Samuel Taylor Coleridge, one by Vaughan Williams from 1905, the other By Holst from his Op.16 H6 (1903-5) contrast with Vaughan Williams' Blake's Cradle Song (1928) , the composer responding to the greater complexity of Blake's poem. Holst's Four Songs Op.14, H14 (1896-98)  are fairly early works, setting poems by Charles Kingsley, Henrik Ibsen and Heinrich Heine (both in English translation) and Robert Bridges.

Vaughan Williams' Bushes and Briars (1908), introduces the group of folk songs in this collection. Bushes and Briars is seminally important, since it was the first song the composer collected in the field, having heard it sung by a labourer in Essex in 1903. It's been performed hundreds of times in many forms, including by modern urban "folk", but here Roderick Williams brings out the sophistication of Vaughan Williams' transcription. The first verse is unaccompanied, as traditional ballad usually was, but the piano part develops it as art song, warmed by the natural sincerity of Williams' style. A memorable performance.  Vaughan Williams collected The Lark in the Morning (1908) in Essex, expurgating more ribald aspects of the original.  The Captain's Apprentice (1908) from a fishing community in Kings Lynn, was adapted into the Norfolk Rhapsody, on which the composer was working at that period.

Holst made sixteen arrangements of folk songs, two of which we have here, The Willow Tree (H83/6 1906-8), and Abroad as I was walking (H83/1). Holst's Four Songs for Voice and Violin (Op. 35,  H132, 1916-17)  display a more "modern" sensibility. There are no time signatures."Bar lines are used for coordination purposes, but the length of each bar varies freely according to the melodic line", as stated in the uncredited programme notes.  Two settings of Walt Whitman's texts from Whispers of Heavenly Death form the basis of the songs Darest Thou Now O Soul. Holst's version H72, 1904-5) is declamatory, delivered here with dramatic flair by Roderick Williams.  Vaughan Williams' version, which he was working on at the same period, incorporating the text into A Sea Symphony. Here it is heard in a setting for solo voice and piano, from 1925. The unison version for voices and string orchestra - a hymn with chamber orchestra - can be heard on Martyn Brabbins' recent recording of A Sea Symphony. (Please read more about that here).
at October 13, 2019