Stravinsky's Prophecy : Listening and hearing are not the same thing 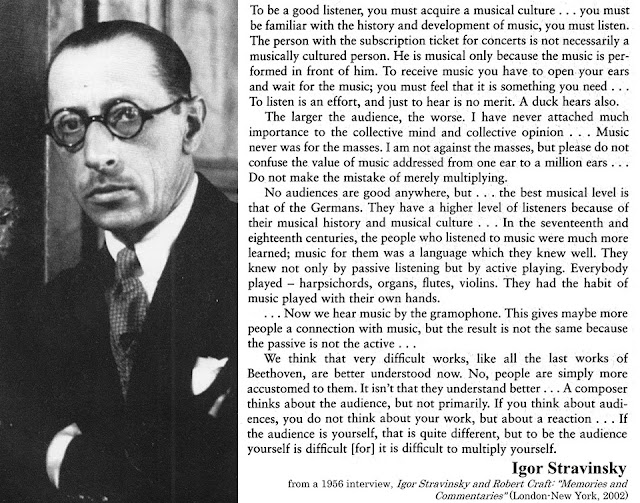 "To receive music you have to open your ears and wait for the music: you
must feel that it is something you need...To listen is effort, just to
hear is no merit. A duck hears also."

This brief quote from Stravinsky divides opinion, but that in itself is revealing.  But what can be so threatening ?  In many cases, the response has been to attack the messenger, anything rather than to think about what Stravinsky might mean. What raw nerve has Stravinsky hit here that should upset some people so ? If anything that proves why what he said then is only too relevant today. Listening is not the same as hearing.  Music is infinitely more than just sound. A duck can hear sounds but few ducks could sit through a Beethoven symphony processing it on many emotional and intellectual levels. To "receive" music involves "opening your ears and waiting for the music". The key word is "waiting" : letting the music unfold, allowing communication.  In normal conversation, you don't interrupt someone when they're speaking and impose your own preconceptions on what they can or cannot say.  You listen to take on board different perspectives and ideas.  Maybe that's why the idea of listening is so disturbing.  Too many people think the world revolves only around themselves and that no-one else can possibly have anything to say.

Stravinsky refers to subscription audiences who attend for non-musical reasons, and more pertinently to the mindset that comes from only receiving music from recordings.  It's not recordings that are wrong - Stavinsky was keen to conduct his own works - but the illusion that music exists in some kind of existential limbo. Music is an art of human communication.  Breaking that connection between listener and the wider world of human interaction deprives the art of listening from its fundamental purpose. As Stravinsky says, composers write because the music compels them.  As long as what they do is worthwhile in itself,  there always will be some who appreciate more than others.

That's where "effort" comes in.  Another word that infuriates ! But effort means differentn things.  For those who love something dearly, effort comes easy.  Stravinsky refers to being familiar with the culture of music, which anyone can pick up naturally if they listen enough.  All human beings develop with time and experience. No-one stays exactly as they were, thinking they know all that is possible to know.  "No-one can tell me what I don't already know !"  But maybe I'm wrong. If the dissociation Stravinsky refers to about receiving music in isolation held back in the era of mass produced music, that isolation now is even more pronounced.  Now it seems people live in sealed bubbles of self-absorbtion, glued to technology, cut off from normal human interaction.  This isolation gets harder and harder to break out of. Not a good thing for society and civilization.

Music has the power to connect us to the world outside ourselves, to enhance communication, to widen our understanding of universal ideas.  Morever as we really listen, we learn a lot more about ourselves in the process. Music cannot be owned. "I tell you the truth, it is hard for a rich man to enter the kingdom of heaven. Again I tell you, it is easier for a camel to go through the eye of a needle than for a rich man to enter the kingdom of God."   Rich men in this case being those who rely on status, externals and processes. Because they have no humility and sense of others, they can't understand the message. Maybe we're heading to the era of Dial-up Music (read more HERE) where composers, and musicians  and music itself can be dispensed of altogether by hearers. That will be the triumph of hearing over listening.

Thanks for this. Excellent food for thought. Indeed, it's not enought merely to "hear". To "listen", and to listen actively, is the question.