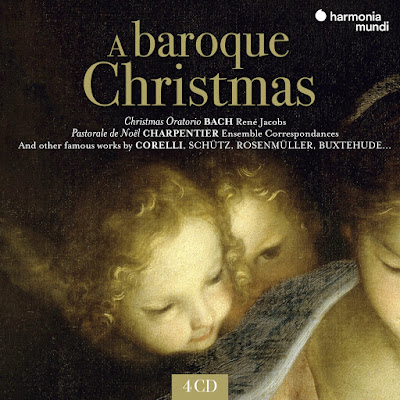 A baroque Christmas from Harmonia Mundi, this year's offering in their acclaimed series. Great value for money - four CDs of music so good that it shouldn't be saved just for Christmas.  Bach's immortal Christmas Oratorio BWV 248 with René Jacobs,  and seasonal works by Corelli, Buxtehude,  Schütz, Rosenmüller and others.  The prize here, though is the Pastorale de Noël by Marc-Antoine Charpentier with Ensemble Correspondances, with Sébastien Daucé, highly acclaimed on its first release just  a few years ago. Daucé and Ensemble Correspondances are among the finest of many very specialists in French baroque. Please read here about their Le Concert Royale de la Nuit, their recreation of the extravaganza with which Louis XIV dazzled his Court. They have also focussed on Charpentier and in particular the Histoires sacrées (Please read more here), which have roots both in sacred oratorio and in the mystery plays of the Middle Ages.  Their performances are outstanding : paragons of the art, presented with stylish flourish. This set is worth purchasing for this superlative Charpentier.

Charpentier's patron was Marie de Lorraine, Duchesse de Guise, an independent woman whose tastes were freer and more informal than those at the royal Court.  In the Pastorale sur la Naissance de Notre Seigneur Jésus-Christ, H. 483, Charpentier adapts the pastoral style into a work of piety, somewhat unusual at the time. Between 1684 and 1686 he created three versions, with different second parts, all of which are recorded together for the first time on this disc. 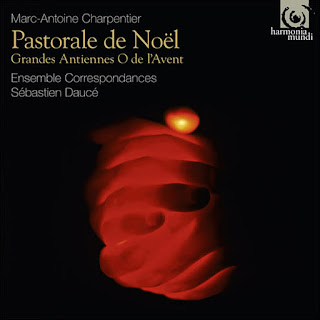 "The first part of the pastorale is imbued with solemnity", writes Daucé. "The protagonists evoke the condition of humanity, permeated by sin, violence, darkness and death, and, in this state of extreme wretchedness, call for a divine sign bringing light, peace, justice and redemption.". The exquisite balance of voices in the ensembles suggests rapture, and the restrained power of the soloist in "Ecoutez-moi, peuple fidele" suggests emotional authority. Charpentier's instrumental writing is equally meticulous, marking the "contrast between the tenuousness of the recitative and the plenitude of the chorus, and above all of the device of silence".  The instrumental interlude that is the "Simphonie de la Nuit" marks in many ways the spiritual core of the first of the two parts of this Pastorale. A sublime "Paix en terre" completes the first half : voices and instruments in glorious harmony.

The second part of H.483 is a series of vignettes illustrating the Nativity scene.  Particularly attractive is the section "Cette nuit d'une vierge aussis pure que belle", the countertenor line lambent and clear, haloed by female voices. All three second parts follow the same pattern but each section within is different. In version H.483a,"We encounter the naïve and folklike elements which the first part of the work had completely avoided", writes Daucé. "Here the musical gesture draws on the same popular imagery with which painters and designers have always depicted the Nativity scene."  Especially imporessive is "Heureux bergers" for tenor with ensemble. This version ends joyously, voices accompanied by pipes, strings and percussion. "Faisons de nos joyeux cantiques", "Menuet de la Bergère" and " Ne laissons point sans louanges".  There are just four sections in the second part of version H.483b. "Le Soleil recommence à dorer nos montagnes" is contemplative, introducing a more reverential character.  The infant Jesus is addressed as  "Ouy Siegneur" framing the last section which is along as the first three sections put togerther, for it celebrates the "Source de lumière et de grâce".
Also included on the Ensemble Correspondances disc is Charpentiers' Grands antiennes de O de l'avent, (1693) ten anthems, each beginning with the word "O" on the veneration of Advent.

The best -known piece on this set will be Bach's Christmas Oratorio (Weihnachts-Oratorium) BWV 248  with René Jacobs conducting the RIAS Kammerchor and Akademie für Alte Musik  with soloists Dorothea Röschmann, Andreas Scholl, Werner Güra and Klaus Häger, all then at their prime. Recorded in 1997, this performance evokes the spirit of early 18th century Lutheran piety.  In modern times, we're overwhelmed by commercialized Christmas kitsch and consumerist excess, and the banality of the seasonal music that comes with it.  All the more reason then to turn to performances like this which reflect the real values of Christmas, and the promise of hope in dark times.  Strong stuff, but necessary.  The fourth disc on this set is a collection of pieces by Corelli (Concerto Grosso), Johann Rosenmüller, Buxtehude, Heinrich Schütz (Heute ist Christus geboren, Concerto Vocale/René Jacobs), Louis-Claude Daquin, Domenico Zipoli, and Claude Bénigne Balbastre from performances recorded between 1976 and 2004.
at November 14, 2019