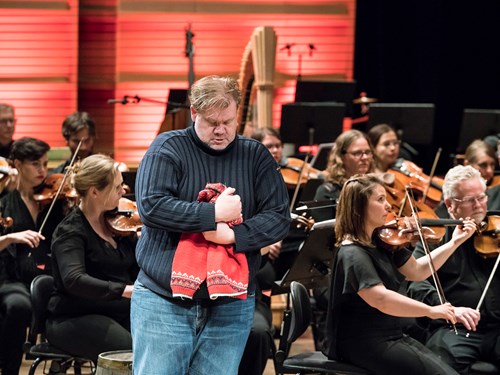 Britten's Peter Grimes at the Royal Festival Hall with Stuart Skelton, Edward Gardner conducting the Bergen Philharmonic Orchestra. Exactly the same cast (except for the Boy apprentice) in London as at Bergen in May 2017. What an outstanding performance that was ! How does London compare ?

When "Sexy Ed" Gardner left the ENO for Bergen, many of his fans wept openly, but it was a wise move on his part, since, until that time, his career had been relatively insular. He needed to branch out, both in terms of international exposure and in terms of repertoire. And the Bergen Philharmonic, one of the oldest orchestras in Europe, needed livening up.  A match made in Heaven?

Bergen is sounding better than it has in years, much sparkier and classier, without losing a distinctive flavour.  The cast list was superb - possibly one of the best that can be put together at present - so no surprises there. But what impressed me even more was the Bergen Philharmonic. This Peter Grimes seemed to come to them intuitively: they don't at all have an "English" sound, but that's all to the good.   Though Britten was an Englishman through and through, his music is far too individual to fit pigeonholes.

This Peter Grimes sounded like a force of Nature, surging like a storm blowing across the North Sea. You could feel the pull of the ocean in this playing.  The Bergeners seem to connect  instinctively to how unseen forces might control destiny, just as nature controls tides, winds and waves. Seamen, like Grimes, understand these things, or they don't survive. Grimes doesn't survive, but what happens to him is more than the pettiness of a small provincial community. When he sails out alone, and tips his boat, he's offering himself in a kind of sacrificial atonement.  He may have been abused himself as a boy, forced into a trade he might not have chosen.  His music suggests that there's a sensitive, poetic side to his personality he may have had to repress, even had other choices been open to him.
Skelton's been singing the part so long and so well that  he can convey Grimes's personality in myriad nuances. But with the Bergen Philharmonic around him, it's as if the Furies themselves were swirling about him, invisible to us, but in his head.  His "Now the Great Bear and Pleiades" was beautiful, but his long Act Three monologue was haunted, he and the orchestra observing the subtle, but important, changes as Grimes's mind begins to unravel. Now we know why Ellen Orford sets such store in knitting. She needs control, every bit as much as Mrs Sedley and Auntie do in their own ways. Ellen isn't as nice as she thinks she is.  Notice how Britten writes Grand Opera parody into her music, when she decides to shelter the child from Hobson the carrier. On some level, Ellen is a diva, a heroine in her own mind, trapped in a small town with no prospects, like everyone else in this claustrophobic community.  Giselle Allen sings well, but Ellen is, like Grimes, illuminated by the music around her. Because Peter Grimes was Britten's first mature opera, and probably Britain's first mature opera, too, it's tempting to think of it primarily as an opera.  But the orchestral writing is magnificent and highly inventive: not for nothing that the Sea Interludes work so well as stand-alone.  Britten knew the music of his time, and the operas of Alban Berg in particular, where orchestral passages shape the narrative.  In Peter Grimes, the orchestration is huge in comparison to Britten's later works, knitting  the opera together, in a sense.  The swells and surges are huge, but not significantly fulsome in the way that, say, The Flying Dutchman is cataclysmic.  Britten, being English, is too polite. Not all that many detect the way Britten used quirky humour to subvert convention.  But it's there, all right.

Please read my numerous pieces on Peter Grimes, and on  Gloriana HERE and on Albert Herring HERE. Britten is oblique : his targets don't know when they're being got at. Gardner "gets" Britten, so he brought out the undercurrents.  Perhaps there is prostitution in places like Aldeburgh, but it's pretty discreet.  The music in the pub echoes American dance-hall music, which Britten knew from his sojourn in America, and would have included for a purpose. Peter Grimes isn't really set in 18th-century or even 19th-century Suffolk, whatever the origins of the tale.  Auntie, her customers and her Nieces sell out, but Peter Grimes is the one character who doesn't lose his integrity, warped as he may be. Grimes doesn't do games. And so he has to die.

Gardner and the Bergen Philharmonic players are magnificent in the big surging swells. Wonderful percussion, the timpani rumbling like thunder.  Thor, beating his hammer. And why not? The Vikings roamed the North Sea.  Their genes must be part of coastal DNA. Baleful horns, moaning bassoons.   But the quieter passages were even more revealing. Britten observed the world around him. We can hear "star" music andd delicate diminuendoes that glow like phosphoresence over the water at night, or the sparkle of light on a Sunday morning. Outstanding playing from the lead violist, who got a well-deserved curtain call on her own. Beautiful harp playing,and strings that kept together smoothly enough, while still sounding individual and lively, like the choruses, where the variety of voices adds vividness to the impact.
at November 30, 2019

You haven’t really said how London compared, and Giselle Allen was replaced by an excellent Erin Wall.Were you actually there?

It's pretty obvious it was a rhetorical question. Did you listen to either? Since Stuart has sung so many Peter Grimes, with Gardner, Jurowski and others, it would be very strange indeed if he wasn't good in the role.

If you're really interested in a comparison, just read what I wrote about 2017