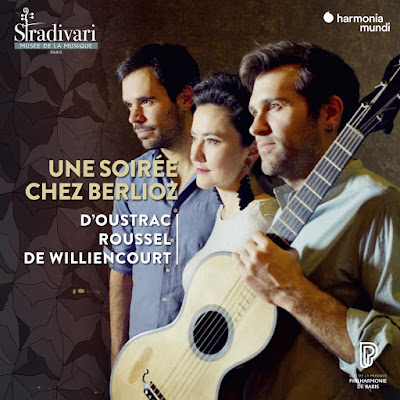 Indeed, the instruments played here are not only period but  unique.  The guitar belonged to Berlioz himself, who used it regularly, and to Paganinni before him. The maker was Jean-Nicole Grobert, whom the composer knew well. Given its significance, Berlioz inscribed the guitar with his signature when he donated it to the Conservatoire de Musique. The piano was made by Ignace Pleyel and was used by Chopin, and is beutifully preserved. More technical details in the notes.

Berlioz's La captive is best known in its orchestral version H60 from 1848, but is heard here in Berlioz's adaptation for voice, piano and violincello (Bruno Philippe)  made soon after the first version for voice and piano, from 1832.  Seven songs for voice and guitar follow and three for solo guitar, interspersed with settings by Berlioz and Liszt.  These are well worth including since this rare opportunity to hear Berlioz's own guitar should not be missed. The timbre is distinctive, warmer and less strident than guitars made for different repertoire, particularly sympathetic to French style and to the elegance of D'Oustrac's voice.  These relatively unknown works also provide context for Liszt's L'Idée fixe LW A16b  an Andante amoroso "pour le piano d’après une mélodie de Hector Berlioz" making further connections between Berlioz and Liszt. Though Liszt generally preferred an Érard, this Pleyel is still closer to the instruments Berlioz knew so well, and appropriate for the the intimate feel of this "soirée chez Berlioz".

Also included are Liszt's transcriptions for piano (LW 205) of Berlioz's "Danse de Sylphides" from The Damnation of Faust, and "Marche des Pèlerins" (LW A29) from Harold en Italie Berlioz' Le Jeune Pâtre breton H 65C to a pastoral text by Auguste Brizeux (1803-1858)  a poet and man of the theatre who popularized the language and heritage of Brittany.  Hence, perhaps, Berlioz's use of the cor naturel, (Lionel Renoux), evoking the sounds of Breton lovers calling to each other over mountains and valleys, "semble un soupir mêlé d’ennuis et de plaisir". Berlioz's Fleuve du Tage (H.5) for voice and guitar is very early Berlioz indeed, written at the age of 16. The Élégie en prose H.47 for voice and guitar sets a translation of a poem by Thomas Moore and comes from Berlioz's Neuf mélodies irlandaises, op. 2, H. 38 .