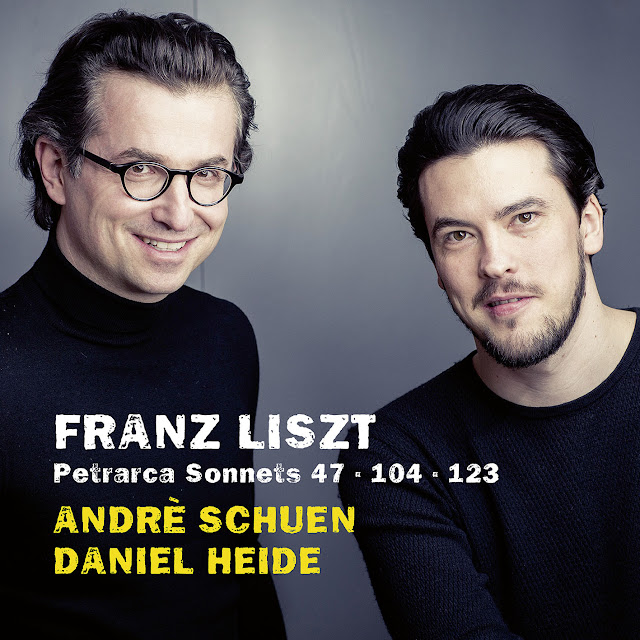 An ambitious new series focusing on the songs of Franz Liszt, starting with all three versions of the Tre Sonetti del Petrarca, (Petrarca Sonnets), S.270a, S.270b and S.161  with Andrè Schuen and Daniel Heide for Avi-music.de. Since no complete edition of the songs exists apart from the Alexander edition for Breitkopf and Härtel in 1919-21, this may be more than an ordinary completist series. There could be as many as 145 variants, with questions of classification, since Liszt did not not assign opus numbers. This recording seeks to highlight the connections between Liszt's three settings oPetrach’s ts 47, 104 and 123.  Recorded in the Marküs -Sittikus Saal in Hohenems, these are performances of great sensitivity, as we'd expect from Schuen, and Heide. Andrè Schuen is easily one of the more promising young baritones around, and one whose genuine love for repertoire leads him to in-depth performances of more eclectic material. He recorded an outstanding Frank Martin Sechs Monologe aus Jedermann as well as Schumann, Beethoven and Wanderer, an excellent collection of Schubert Lieder. Please read more about that HERE and HERE.  At the Wigmore Hall on Saturday 23rd November, Schuen and Heide are giving a recital of Schubert and Mahler (Lieder eines fahrenden Gesellen and the Rückert Lieder). Be there ! I grabbed tickets months in advance.
Liszt's first settings of the Petrach sonnets date from 1842-6 while the second settings were completed between 1864-1882. Composed decades apart, these are far more than simple "variations" but thoroughly thought-through new works, showing the evolution of Liszt's approach though time.  The order of songs is also transposed. In the first Sonetto 104, (Pace non trovo) is declamatory, each verse clearly separated by a piano interlude. The line "equalamente mi spiace morte et vita" rises with operatic flourish, before a hushed ending, marked by two assertive chords on the piano for emphasis.  The second Sonetto 104, better reflects the brief phrases in the poem, which flow in succession, building up tension towards the line "né mi vuol vivo, né mi trae impaccio" expressing the poet’s frustration. The line "in questa stato son, donna, por voi" is all the more moving because it expresses love, tenderly complemented by a gentle piano postlude.
In the first Sonetto 47 (Benedetto sia 'l giorno), the mood is gentler, suggesting the purity of the beloved.  Elaboration is focussed on the third strophe "Benedette le voci tante" where phrases are repeated, adding lustre to the name "Laura", which Schuen projects with glowing awe. The second setting of this sonetto is even more sensitive, Liszt's attention even better attuned to the scansion of Petrarch's flowing phrases,  "'l giorno, e 'l mese, e l'anno, e la stagione, e 'l tempo, e l'ora, e 'l punto", which are all connected, since they underline the meaning of the poem.  Schuen's perfect diction underlines the melodious nature of the text.  Only in the line "E le piaghe, ch'infino al cor mi vanno" is there a hint of the pain the poet is going through.  With such subtlety,  Liszt has no need to decorate the third strophe : its impact comes from the sincere, direct expression of emotion.  This makes the final strophe even more moving, as it gradually decelarates into quietude.  For the poet, nothing matters but the beloved : "Ch' è sol di lei" sings Schuen with deep feeling, "si ch'altra non v'ha parte". As the song subsides, the word "benedette" is intoned, like a prayer.
An extended piano prelude introduces the first setting of Sonetto 123 (I' vidi in terra), the genly rocking melody taken up in the vocal line. The beloved is now a memory,  "par sogni, ombre e fume". Though there are differences in the two settings for voice and piano, the focus is now on the poet, alone. For Liszt as composer, such personal expression would have favoured the piano. Given that the versions for solo piano from Années de Pélerinage, Année II (Italie) S 161 no. 4 to 6 were written shortly after  the first settings of the songs for voice and piano, S 270a, it is natural that the resemblances are strong. The popularity of the pieces for piano thus derives from the emotional power inherent in the songs, even shorn of text.  Hearing all three sets together enhances understanding of their context and the role they play in the development of Liszt's oeuvre.  Paradoxically, this also means a greater appreciation of the later set, known as S 270b,  but much more mature, subtle and  sophisticated than mere variation.
Appositely, Schuen and Heide conclude this first volume in the Liszt Lieder series with Liszt's setting of Victor Hugo, Oh! Quand je dors, S 282, here in the second version, completed in 1859.  Many of Liszt's songs are standard repertoire, but the time has come for a re-evaluation of all the songs, in context.  Recently, Cyrille Dubois and Tristan Raës presented Liszt Lieder together with his Mélodies in the French style, demonstrating how original Liszt was, a composer "beyond boundaries", so to speak. Please read more about that HERE.  This recording with Schuen and Heide is even better, so good that it should be essential listening for all.