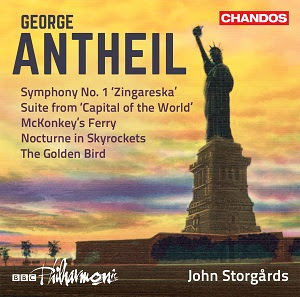 The Chandos George Antheil series with John Storgårds and the BBC Philharmonic continues with Volume III featuring Antheil's Symphony no 1 "Zingareska" (1920-1922, rev 1923).  This series is important because it highlights Antheil's primary status as a composer of art music for concert performance. Indeed, he is infinitely better known as the avant-gardiste who created Ballet méchanique than for the music he later wrote in Hollywood.  Ballet méchanique is a seminal work, very much a part of the cultural and artistic renaissance that was Paris in the 1920's, and defines Antheil's whole career.  He started out as a composer of "serious" art music and continued as such until his death. His finest music for cinema was also written for  independent, often obscure, art-movie studios. Please read more about Ballet mécanique HERE and HERE and much else on Antheil elsewhere on this site.

With Antheil's Symphony no 1, Storgårds puts the focus directly on Antheil's early work, before he went to Paris, and places it in relation to later works like McKonkey’s Ferry (1948) and Nocturne in Skyrockets (1951), receiving its first recording here.  Antheil began what was to be his first Symphony when he was barely 20, but its originality and creative vision are remarkable for the period, particularly for a a man who was still a student.  It was inspired by sounds of the area in which Antheil grew up,"a deliberate abandonment of academic compositional techniques in favour of music driven bty emotional and atmospheric stimuli", as Mervyn Cooke writes in his notes.  Yet it is not a work of nostalgia, but incoporates new ideas and influences, including ragtime and circus music, and the music of Stravinsky, with special reference to Petroushka.  It epitomizes the two sides of Antheil's art : modern America and Europe, and draws them together.  The title "Zingareska" was not Antheil's, but one can hear why the heady eroticism of gypsy music would express the nature of  a free spirit like Antheil.

A plaintive solo violin announces the beginning of the first movement, answered by darker, more ambigious winds and brass. The mood is nocturnal, evoking "the the fragrance of honeysuckle on the New Jersey night air" as Antheil wrote later, but also disturbing. Dark, ambiguous forces surround the Innocente of the violin and the pastoral woodwind theme that follows it. A section marked Volupté surges, suggesting passion, but the movement ends in sharp dischords and a Lamentoso.  Perhaps a clue might lie in that Antheil was intensely in love, but the girl's mother disapproved, and took her off to Europe. For Antheil himself, this was the impetus that led him to head there too, changing his destiny. In contrast, the second movement is wilder, more "primitive" in the sense of Stravinsky and early modern art.  Bold, robust chords lead to stillness from which a solo violin emerges, followed by clarinet. Darkness encroaches again, blown away temporarily by wild "ragtime" rhythms and angular striding steps.  The parts for winds and brass  are cheeky, almost cartoon-like in their defiance, to the extent that the orchestral players of the Berlin Philharmonic under Rudolf Schulz-Dornburg burst out laughing in rehearsal. Only the first two movements were premiered in 1922 on Antheil's suggestion.
The third movement, though, is poignant, percussion and strings creating a bell-like backdrop to the entry of the solo violin, which appears like a dancer, alone on stage. Petroushka, the puppet who is forced to wander but but has no home, setting the context for the ragtime and circus themes. Carnival may be fun, but masks hidden sorrow.  Hence the chill of the ending, and descending chords.  Is there resolution in the last movement, or more defiance ? The exuberant "ragtime" theme alternates with themes that are more haunted (exteneded wind choruses), and a section marked "sardonic"before a suddden, elusive coda. Antheil's teacher, Ernest Bloch, had such regard for the sympathy that he wanted Monteux to conduct it, and later, hearing that Antheil was penniless, helped him out financially.

Antheil's McKonkey's Ferry, from 1948, is a concert overture nspired by the image of George Washington crossing the Delaware in 1776.  It is dramatic, and patriotic, but as so often with Antheil, there can be other interpretations.  By this stage, the composer had been back in the United States for fifteen years, having been forced out of Europe by the rise of the Nazis.  Perhaps the aural images of  the ferocious snowstorm through which Washington battled give the surface triumphalism in this music more personal meaning.  The Capitol of the World (1953-55), a suite for orchestra from a ballet based on a tale by Ernest Hemingway, is also bittersweet. A waiter pretends to be a matador, but is killed, impaled by knives embedded on a chair representing an artificial bull.  So much for glorious fantasies about the bullring ! Do not be deluded by the flamenco flourishes and lively rhythms : this is tragedy, all the more painful because the subject is tawdry.  With The Golden Bird, (1921) we return once again to Antheil's youth.  Antheil was a virtuoso pianist, and this piece, originally for piano, which he himself orchestrated, demonstates his facility for exotic effects even at an early age.
In Nocturne in Skyrockets (1951) we glimpse the heights Antheil was capable of achieving. It is a tightly constructed yet almost magical miniature, with long, searching chords rising upwards, as if into the freedom of the upper atmosphere. Delicate spiralling notes suggest fireworks, sudden explosions of light in a dark sky, doomed to self-destruct. Yet for a moment, such beauty !   With this Chandos series, John Storgårds and the BBC Philharmonic make a strong case for appreciating  Antheil at his best : a composer whose work stands comparison with Charles Ives and Edgard Varèse, in terms of the boldness of conception, but with an entirely individual and original personality.   Please also read my review HERE of the second volume in this series, with Antheil's Symphonies no 3 "American"and No 6 "After Delacroix" and much else about Antheil on this site.
at November 22, 2019