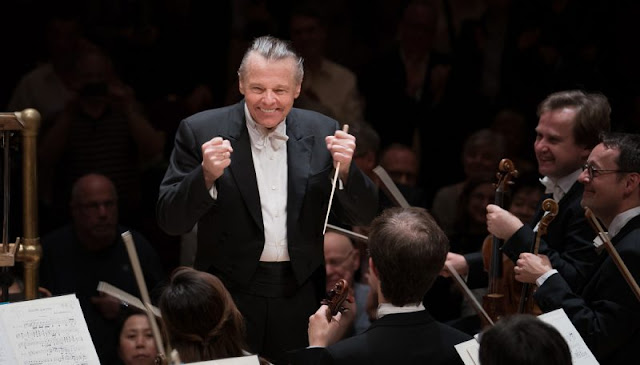 Mariss Jansons has died, aged only 76.  "An era draws to a close" as BR Klassik has announced.  "Es war diese glühende Intensität, die das Musizieren von Mariss Jansons so unverwechselbar machte. Sein Leben war von rigorosem Arbeitsethos geprägt, von unermüdlichem Partiturstudium und schonungsloser Selbstdisziplin." (He had a glowing intensity that made his musicianship distinctive. His life was marked by a rigorous work ethic, tireless score study and relentless self-discipline".
Jansons wasn't flashy, he wasn't vulgar and he didn't pander to popularity.  He was motivated above all by music and his love for his art.  His mother was an opera singer, but, because she was Jewish, she bore him under harsh conditions in hiding in Riga in 1943. Her family didn't survive.  His father Arvid Jansons (1914-1984) conducted the Riga Opera. Latvia was soviet bloc, so in Cold War times, he also worked in Leningrad, with Mravinsky and Sanderling.  As a small child, Mariss grew up immersed in opera and ballet . He’d pull his shirt up as if he was wearing a frock coat and play at being a conductor. "Bücher waren meine Partituren,ein Stück Holz mein Taktstock. Ich war total begeistert von diesem Beruf", he said. (Books were my scores, and a little wooden stick my baton). Later in life, he'd mentor many others, including Andris Nelsons. I cannot comprehend the hostility that has surfaced in some circles after the news of Jansons' death.  So what if he's not known in all corners of the earth ? Better that his passing gives those who missed out during his lifetime a chance to find out more.
Jansons was such a familiar figure that it seemed as though he was part of the fabric of our listening experience.  We seemed to hear him all the time, in many places. So many concerts, so many recordings !  Currently, I'm listening to his Mahler Symphony no 3 with Oslo Philharmonic, released just weeks ago.  Most attention goes to Jansons's mainstream work, but he was also a champion of more unusual repertoire.  Here is my review of Jansons conducting the world premiere of Wolfgang Rihm, probably Germany's greatest living composer.  Sadly appropriate in the circumstances.


"....Is there an afterlife in Rihm's meditation on life and death ? His Requiem-Strophen concludes with an Epilog, using the text of Hans Sahl's poem Strophen, published in 2009. The poem itself is elliptical, phrases repeated with slight variation, so it lends itself perfectly to Rihm's approach. “Ich gehe langsam aus der Welt heraus in eine Landschaft jenseits aller Ferne”…..and what I was and am and will stay forever, “zeht mit mir ohne Ungeduld und Eile, als war ich nie gewesen oder kaum”.(Go with me without impatience as if I had never been or hardly was). The soloists are in repose, but the choir sings on, serenely, and the orchestra rises to new heights. The ebb and flow and stop start pulse remains, its significance revealed. The pulse of an individual human body might cease, but others continue to beat and will do so in bodies as yet unborn. Rihm, like Schoenberg before him, has always acknowledged his appreciation of Johannes Brahms, whose German Requiem is an obvious model, though Rihm's idiom is uniquely his own. Rihm's Requiem-Strophen is therefore much more than a generalized Requiem but also a tribute to artists, poets and composers who have gone on before, and an inspiration for creative minds in the future."
at December 01, 2019