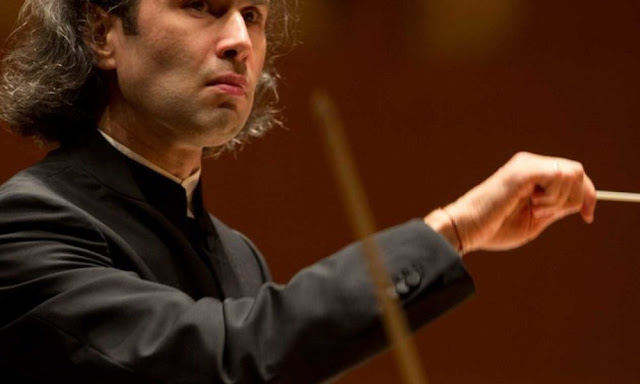 “Revolution in the Head" strange title for the concert by Vladmir Jurowski and the London Philharmonic Orchestra at the Royal Festival Hall, London, featuring John Foulds’s Dynamic Triptych and Shostakovich Symphony no 11 "The Year 1905".  Jurowski's Shostakovich is always good, and he's done this particular symphony many times, but this performance was extraordinary - valedictory, tender, and intense committed. Frankly, we can never get enough of performances like this, and of Jurowski's characteristic intelligence and world-vision. I'll miss his short discussions which go way beyond the score, to the very essence of human creativity.

But why "Revolution in the head" ? Not the obvious connection with the insurrections of 1905, but  what they may or may not have foretold. A few years back there was a quiz through which you could figure out what type of revolutionary you'd have been at the time. It was so erudite and so detailed that the only people who got it would have been historians, but my goodness it was accurate !
What of John Foulds’s Dynamic Triptych op. 88 (1929)? Foulds has cult status and attracts exaggerated claims. Dynamic Triptych is readily accessible, as it deals with three basic elements of composition : mode, timbre and rhythm, each developed with playful inventiveness.  Even humour - listen out for the off the wall sound in the second section when the whole idea of timbre melts away, almost as ethereal as a theremin. The soloist here was Peter Donohue, with whom Sakari Oramo recorded the Dynamic Triptych with the CBSO fourteen years ago.

On the radio, Donohue says that Foulds's' reputation as a composer of light music affected his reception, but Foulds's' World Requiem (1919-21) is hardly light music. More worrying is the idea that Foulds was eclipsed by Schoenberg and American composers, though Ives and Varèse then were marginal figures.  The fact is that composers had been experimenting with new approaches to modality, timbre and rhythm for quite some time.  As for the Orientalism that so inspired Foulds, that too was nothing new.  Orientalism isn't just about the orient but the promise of intriguing new ways of expression. In Germany, the Idea of the East inspired Goethe, Beethoven, Mozart and of course Mahler, Zemlinsky and others.  In France, contact with other civilizations influenced art, poetry, music to an even greater extent. In Italy, think Puccini, and in Russia, think Stravinsky. Even if one were to restrict comparisons only to British music, we have the examples of Gustav Holst, Samuel Colderidge-Taylor, Delius, Sorabji and Benjamin Britten.  And of course Ralph Vaughan Williams and others studying the modes of earlier western tradition.  British music isn't "pastoral" or insular, however much some might prefer it to be. Why blame Schoenberg (and Americans) when so much else was going on ? Foulds’s' Dynamic Triptych isn't that "strange" either when you consider what else was being written in the explosion of creative freedom of the 1920's and 30's. Perhaps Foulds’s' time will really come when he's appreciated not as an oddity but in the context of his time.
at December 12, 2019