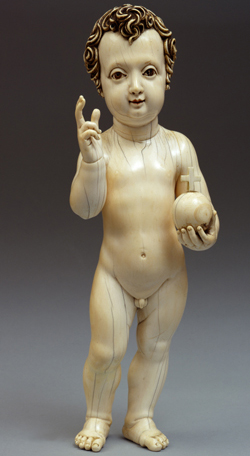 The Infant Jesus, holding the world in his hands, carved in ivory in the 17th century.  Once ivory objects were made all over Asia and Europe from very early on. Since Africa and India were part of the East-West trade route, smaller religious figures
like these were common in Portuguese communities, all along the route. In Macau, there's a museum of baroque religious art, ivory, silver, gold reflecting the prosperity the city once enjoyed. This particular figure is in Macau, but it's carved in the "Indian" style, Goa being a major centre of religious art.  Japanese and Chinese ivory workers were also involved. Santos were also revered in private homes. My grandparents inherited an heirloom cabinet from the 18th century, big enough that the sons could crawl in to do the cleaning before Holy Days, as part of religious observance.  It was destroyed during the war.  Eventually my Dad started a collection but it was nowhere quite the same. Most of the figures were clothed in hand-embroidered silks and lace, but very few of those garments survived, especially since new garments were regularly made, as a sign of veneration. But the carving is so exquisite that it's a good thing that the figures are now displayed in their natural glory.

Here's a poem written in Macanese patua. Portuguese from Portugal can't follow the grammar or the vocabulary, since it borrows so freely from Asian languages.