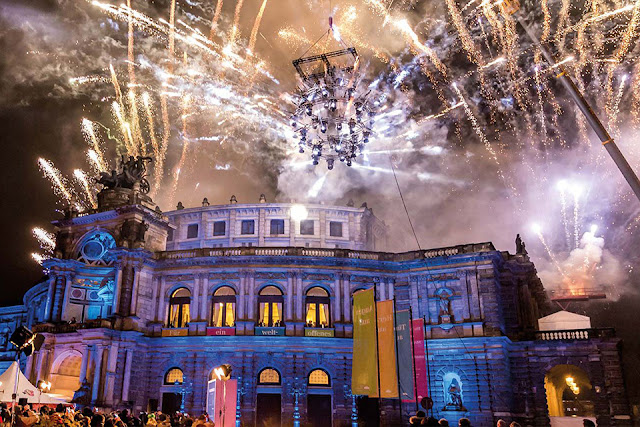 Live from the Semperoper, Dresden, this year's Silvesterkonzert : Franz Lehar, extracts from Das Land des Lächelns with Christian Thielemann conducting the Staatskapelle Dresden and soloists Pavol Breslik, Jane Archibald, Erin Morley and Sebastien Kohlhepp.  Core Austro-German repertoire, or rather operetta, good natured and stylish.  Just right for New Year's Eve ! Just because it's party time that doesn't mean dropping standards to fit the fashionable market. Lehar's Das Land des Lächelns (Land of Smiles) is closely associated with Richard Tauber, so it's a star vehicle for a good tenor. In Pavol Bresik we have a singer who not only sing but can create Prince Sou-chong as a believable and human personality.

This makes a difference because the libretto is painfully dated : a part created to showcase white people in yellowface, as if real Asians were no more than caricature.  That genre was normal in the early part of the twentieth century, when imperialism and white supriority went unquestioned.  Implicit in the genre is the idea that races cannot mix, and that exotic aliens, despite their erotic frisson, are dangerous to "normal" people. That is just not acceptable today. Fortunately there's enough in the  operetta that it doesn't have to rely on kitsch stereotype. Bresik's Prince Sou-chong is an ordinary, decent man from a culture which Lisa and her friends don't have a clue about. In "Bei einem Tee à deux", we glimpse for a moment how two people can communicate. He knows more about tea than she ever will, so the balance isn't all in her favour.  Bresik is genuinely sexy : he doesn't need a bucketload of makeup in order to pretend to be what he is not. He comes over as a hunk most people would fancy.  He really does command the stage. That "Dein ist mein ganzes Herz" is more than a Big Tenor Moment. Breslik makes it feel real. In the finale, when the song is repeated, he sings with sincere feeling. Despite the smiles Das Land des Lächelns is human tragedy behind a mask of insouciant good cheer. Smiling through tears, like so much of this genre. Anyone can feel that way, whatever their origins or background.

Jane Archibald was a good Lisa, beautifully crested, and Erin Morley, (costumed like fake Japanese !) a sympathetic innocent.  Secretly, she loves Graf Gustav von Pottenstein (Sebastien Kohlhepp) but that love is doomed. Thielemann gets lively, animated playing from the Staatskapelle Dresden, bringing out the "orientalism" in the orchestration.  The "Chinesischer Hochzeitszug" is a bit of a gallop, but  then it should be. Lisa's rushing into something she doesn't understand, and Lehar is writing facsimile of music he doesn't understand, either.  But's its fun anyway. When you're sad, don't mope, but get on with things as if everything will turn out right.
at December 31, 2019