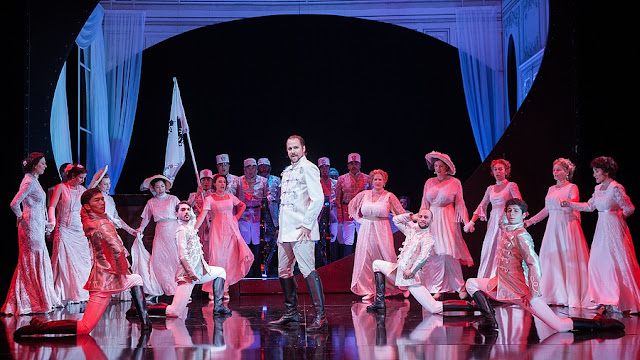 Brilliant Emmerich Kálmán Ein Herbstmanöver from the Stadttheater, Giessen in 2018, conducted by Michael Hofstetter now on Oehms Classics. Although it's tagged with the title "The Gay Hussars", that's a misnomer, which refers to an English language version made for New York. Kálmán's original was Tatárjárás, (1908) which roughly translates from Hungarian as "the invasion of the Tatars".   This is crucial, since the Hussars were outsiders, much in the way that the Tatars from Central Asia raged over Europe for centuries before. Like the Tatars, the Hussars were cavalrymen, often mercenaries, whose "otherness" represented wildness and freedom. In Ein Herbstmanöver, the German version first heard at the Theater an der Wien in 1909, the Hussars are partying in a palace, where women swoon over them. Being a Husssar symbolized sexual allure. But party hard, die hard.  Unexpectedly, the men are called to the battlefieldand the party's over. Just five years later, Hussar regiments were slaughtered : horses no match for modern weapons.  "Autumn" here has double meaning.  Although operetta seems light hearted, it's more a case of "smiling through tears". Think Die Fledermaus where pain and desperation are masked - literally - by extravagance and champagne.

Like Singspiele before them, operettas were almost more theatre than opera, with extensive dialogue,  the repartée topical, witty and sometimes risqué.  This Ein Herbstmanöver from Giessen, also broadcast on German language TV, ran well over three hours in production, but the version for CD focuses on the songs, interspersed with snatches of dialogue as introduction.  The selection flows together well. The pace is racy, capturing the exuberant high spirits that define the genre.  Typical, too, is the sense of creative freedom. Operettas were often re-imagined for different audiences, libretti often adapted for new purposes.  So it's nothing unusual at all, that this version, used dialogue by Balázs Kovalik which might be too idiomatic to translate, and too extensive. It also includes the "Pumper-Duett" from Kálmán's Der Güte Kamerad (1911). The male bonding swagger in the text fits well, as does the idea of "Pumpern", Austrian slang that means "stark, angklopfen" (bang, bang,  keep knocking) - use your imagination to figure that out.  Kálmán's characters employ distince voice types - a mature soprano (Christiane Boesinger) for the Baronin Riza von Marbach, and an authoritative baritone (Grga Peroš) as Oberleutnant von Lörenthy, a lighter baritone (Tomi Wendt)for Wallerstein, the reserve cadet who doesn't like being a soldier, and a heroic tenor (Clemens Kerschbaumer) as Morosi, the virile Volunteer who steals the heart of Treska (Marie Seidler) whose father wants her to marry Lörenthy.  The plot revolves on upheaval. The castle belongs by rights to Lörenthy, but his father was bankrupted by Riza's deceased husband : Lörenthy lost his patrimony and the girl he loved, at the same time. He can't bear to join the party, nor even enter the castle.  Now his commanding officer, Feldmarschall von Lohonnay (Harald Pfeiffer) repeats the pattern with his daughter. This time, though, the world has changed.  Two old retainers, Bence and Kurt (Rainer Hustedt and Rainer Domke), character singers, recount the narrative.  The performances are clear and distinct, and the songs fit the personalities so well that it's easy enough to follow what's going on, with basic German. (synopsis provided, and plenty of photos).

And the songs are so stylish that you can sit back and enjoy this Ein Herbstmanöver as a basic musical experience.  The Overture is lively, almost manic, with flourishes which might  suggest the galloping of horses or dancers, though the frenzied build up of tension is relentless, inescapably demented. The military trumpet and the suggestion of taps, imply that all will not end well.  Baronin Riza and her ladies are excited by the ball that is to come, and the men : thus the coquettish song, with undertones of waltz. The Marschlied von Marosi is a cheerful setpiece establishing Marosi's personality, getting everyone in party mood.  In contrast, the Lied von Lörenthy is melancholy, a "song to the moon", revealing the suffering Lörenthy has experienced over the years, though his career has prospered.  In bursts Wallerstein, grumbling and protesting : comic relief.  A brief spoken Melodram leads to a Soldatenlieder, where Lörenthy and his men sing of army life: big, punchy choruses ! With Seh ich dich Strahlen, Baronin Riza sings, accompanied by lush strings and harp. "Mein Leben is eigentlich vorbei" - despite her wealth, her life is really over, since she didn't marry the man she loved.  Lörenthy answers "Denkst du daran" ; perhaps Riza didn't dump him. The two are still a pair, after all these years.

A series of quadrilles, dance songs before the Pumper-Duett and the Tanz-Duett Frauenherzen re-establish the macho atmosphere.  Yet the Serenade reminds us that there are broken hearts in the debris.  Not for long, though. the Kusslied, the Couplet Wallerstein and Walzer-Ensemble chase away doubt : mock hiccups in the vocal lines suggest drunken revelry.  With sneers the Himmel, Herrgott, mayhem breaks out - the music more manic than ever.  "Zigeunermusik", sneers Feldmarschall von Lohonnay as a gypsy violin plays around him. its melody growing ever wilder.  But  Lörenthy begs the gypsy to keep playing . (Robert Varady, soloist).  The Zigeuner (outsider) seems to liberate what has been repressed, too long.  Riza sings of the magic that is love. She and Lörenthy duet , repeating each other’s lines, haloed by harps and strings, before the full orchestra rises to glorious climax.  But the pounding of percussion suggests the pounding of heavy guns.  The chorus cry in frenzy "Gott in Himmel" as the men are called into action. Long, staccato vocal lines suggest gunfire. But the dance goes madly on, as the brass blares. A poignant finale.  The solo violin calls over the sound of distant cannon,  and Bence, the old servant, muses  alone, commenting on the upheavals he has witnessed.  But the choruses continue singing merrily as if oblivious.

There has been a lot of Kálmán in recent years, some extremely good,  so the composer and genreshold be reasonably familiar. This Giessen version of  Ein Herbstmanöver is so lively, musically-informed and so idiomatic, that this is a welcome outing for this early work which brought him to fame in vienna.
at December 16, 2019