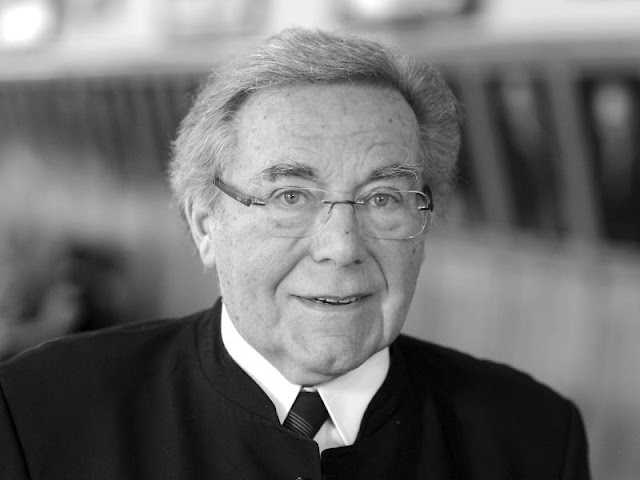 Announced a few minutes ago in Dresden, the death of Peter Schreier after a long illness, aged 84. It is particularly ironic that he died on Christmas Day.  His Bach and Heinrich Schütz are of course basic fare this time of year, but he also loved singing more informal Weihnachtslieder and folk songs and used to do Christmas specials on German TV.  He took his Christmas seriously ! And now, perhaps, he's with the angels and with those who shaped the musical culture that shaped him.

Born into a musical family in Meissen in July 1935, Schreier was singing at a very young age. Aged 8, he appeared on stage as one of the Three Boys in Die Zauberflöte.  Aged 10, he joined the Dresdner Kreuzchor. The city had been destroyed in the firebombing of February 1945, so the boys lived in basements. Butr so did everyone else. The Kappellmeister was Rudolf Mauersberger, a composer as well as conductor. Please read HERE about Mauersberger's Weihnachtszyklus  written in Decemeber 1944 to cheer the boys up in wartime.  It celebrates Christmas from the perspective of children. It's not yet another telling of the Bible story, which the choristers sang about all year round. Instead, it describes the Dresden Striezelmarkt, or Christmas fair, and the simple folk toys that children marvelled at before Christmas was commercialized. We can hear bells, cuckoo calls, and rhythms suggesting the movement of mechanical toys.

In response to the horrors of war, and the millions killed, Mauersberger wrote his Dresdner Requiem, first performed in the bombed out Frauenkirche, with the key alto part written specially for Schreier.  By spooky coincidence, that's what I've been listening to this season rather than regular Christmas fare.  This piece is closely connected with Schreier and the traditions he came from. It's about the mass deaths of millions in barbaric world conflict. The alto part seems vulnerable, but its purity shines out, a message of strength under desperate conditions. (I'll write more soon).  Mauersberger (1889-1971) shaped Schreier's career, supporting him in his transition to tenor after his voice broke.

Perhaps that bedrock is why Schreier's Bach, Schütz and so  much else are so transcedent that they are almost divine. There are few Evangelists quite as intense and committed as Schreier's. He's not  bland, but totally earnest.  The message in these works is much greater than picture-book pretty.  He brought the same passion to his Mozart, Weber (the finest Max, a character torn between good and weakness). Wagner (truly demonic Mime) and much else. Even Janáček. That same commitment shaped his Lieder singing : always, foremost, meaning expressed through sound and nuance.  Because he cared so much about Lieder as communication, he could draw new insights no matter how often he sang something. Lieder is an inward, individual art, miss that and you miss the point.  His Schubert and Schumann are benchmarks, but he also championed other less well known composers. Schreier's Lieder, with its intelligence and sensitivity, shaped my entire listening career. Losing him is like losing a father figure.

Schreier was a much loved regular at the Wigmore Hall for many years. At his farewell concert in 2003, pretty much the whole audience got up to greet him in the Green Room. The place was packed, but he noticed, behind all the crowds, a frail old lady who looked about 90 and walked with sticks.  Immediately he rushed up to her and led her in, sitting her in a seat beside him. "Thank you, dearest X, you have come from so far to see me!" he said, almost tears in his eyes. "For you, my boy (!) " she said, "I would travel any distance to see you again". All in German : I don't know the background, but the sincerity of feeling they had for each other was obvious.  That is the sort of person Schreier was.  He cared about things he believed in. Wildly successful and a fighter, but not a showbiz creation, Schreier was an artist of integrity, a man for whom sincerity and commitment were principles of faith.