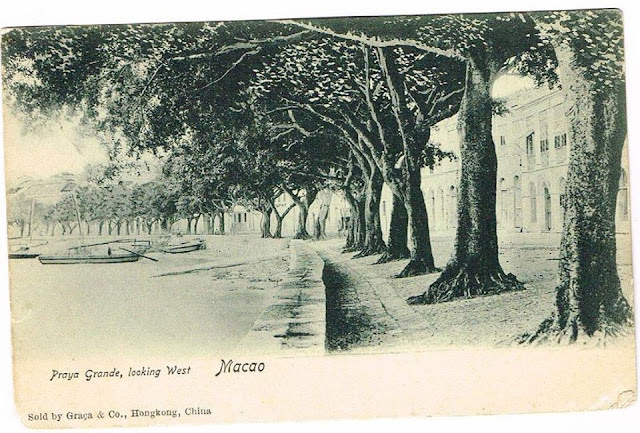 In a dream I was in modern day Macau in a tiny apartment. Below, in the street, was a pedicab driver ,looking for work. Usually they only carry tourists for short distances. "Take me to Califonia" I asked, naming a mall that long ago went bust.  Unperturbed, he pedals on but the pedicab turns into a bicycle and I'm riding pillion like people used to do all the time.  Suddenly, he takes a sharp turn at the Praya Grande and descends straight into the river; now it's built up but in the dream it’s waterfront, the water brown with delta mud and pieces of vegetation from upstream. How can two people cycle up against the flow of the mighty Pearl River, whose source is in the mountains of Yunnan  ? Beneath the water there's a solid path, invisible above but so firm and straight below that the bicycle doesn't even wobble, though the driver and me are immersed to our chests. So we proceed, untroubled, way up the delta, following the shoreline and ancient villages. Eventually we're back in modern Macau near the bus terminus by the Taipa bridge.  Miraculously, I wasn't in the least bit wet or dirty at all, despite wearing a long white cotton gown through the waters of the river, which are so brown and fertile that they support thriving farming and fishing communities. I offer to pay the driver  but he won't take anything, and disappears. What I've learned from this journey is greater than money can buy.  Nowadays people think they can just deny heritage as if it means nothing.  But without foundations, you're nothing.
at December 21, 2019

Email ThisBlogThis!Share to TwitterShare to FacebookShare to Pinterest
Labels: Macau