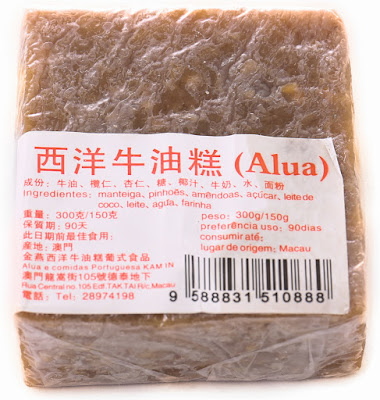 Alua or Aluar, traditional Christmas delicacy in Macau. As the photo shows, it's now sold in shops as "Western style Nien Go", ie a variant of the Chinese New Year treat Nien Go (cake/pudding that marks the arrival of a new year). Both are made from more or less the same ingredients, glutinous rice, bing tong (slab brown sugar, either Chinese style or what was known as Jagari, from India), coconut milk, nuts, and sometimes lard or butter (Macau style). Heavy duty - you can only eat a sliver at a time, even when it's fried or steamed to soften it. An excuse to wash it down with lots of Chinese tea.  The surface texture was slightly greasy, and the colour usually dark brown, like the sugar, with almonds and extra coconut.  The treat is also supposed to have Indian origins, with Persian, Goanese and Malay versions as well, which isn't so surprising given that these were points on the trade routes between China and theWest from the 16th century.

Making Alua was hard work - the rice had to be ground down fine with mortar and pestle, and the mix steamed for ages. Families  that made it tended to make it in batches, which were then sold throughout the community. Certain cooks were famous, their wares highly sought after : they took bookings well in advance. Read more HERE.  The last time I ate alua was in Macau when I was a teenager, delicious batch from an elderly lady whose family had been making it each season for 250 years.  Calories and cholesterol weren't an issue then, since most of the year people lived on simple fare - vegetables, fish and rice, and religious Fast Days, and abstinence before Mass were strictly observed.  Christmas was a very big thing in the Macanese community because it reinforced Catholic identity, at a time when being a Christian was definitely a minority thing, and the Macanese with their mixed origins and influences, not part of mainstream Portuguese society.  When my Dad was a kid, many y still celebrated in the old Macau style - heaving tables of food, decorated with home made lace doilies and paper flowers, rows of oranges lining cupboards and shelves (oranges also being a Chinese symbol of happiness and hope). You didn't dare miss Mass, you prayed all week in front of the Nativity.  Lots of other festive dishes like giant meatloaf,  cakes and candies like Farté, cookies supposed to represent soft pillows for the Infant Jesus. Aluar represented the hard mattress (hardship) on which he was born, a refugee, fleeing for his life, something that was integral to our understanding of the meaning of Christmas, when God became man. No Coca-Cola Santa ! no commercial tack and excess.You can't in any case overdose on Alua, or your digestion will rebel.

Macanese home cooking bears little to no relation to what's served in restaurants these days. Beware many of the cookbooks and "guides".  Even the BBC does Macau food, but the recipes are a joke. Things like African Chicken were invented in the early 1960's by professional chefs. Fortunately, families lucky enough to have hand written recipes from way back, are collectingm them and publishing them within the Macanese community.  Still, closely guarded semi-secrets.  HERE is an excellent and authentic community resource.