Jesus, Mary and Joseph, refugees. What was God trying to tell us ? 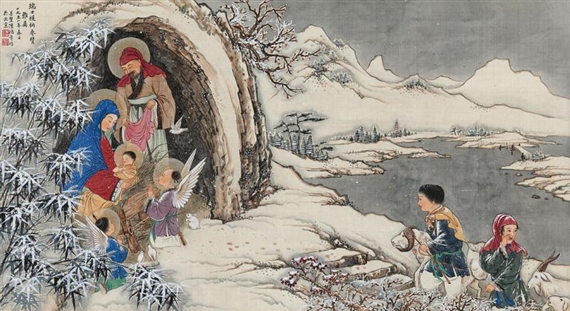 The Nativity, a painting by Lu Hong nian ( 陸鴻年) 1914-1989. Summoned by Chinese angels, shepherds are arriving at the cave in which Mary, Joseph and the Infant Jesus are taking shelter.  Mary and Joseph were refugees, fleeing persecution. The North China context is important. No cosy "western" fantasy here.   In Lu's lifetime, people all over China were refugees of some sort or other, displaced by war and suffering. No-one chooses to risk their lives to become a refugee. whatever the reasons.  Why did God deliberately chose to send Jesus to be born in suffering and hardship ? God could do anything he likes, but he was making a powerful statement. Too many miss the point, entirely.

In Lu's case, that Chinese context was especially important because he sought to connect Christian concepts to Chinese tradition and values. There's a huge body of art of this type, though Lu as an artist was way above the usual prayer book art we grew up with.  This approach goes way back to the first Jesuits who entered China,  respecting Chinese social mores and values.   A Jesuit in the Forbidden City, R Po-chai Hsia, OUP 2010.  Meticulously researched, and the first to use original sources in Chinese, and written with genuine understanding of Chinese society and mores, it is pretty much essential reading. The same cannot be said of the more populist best sellers.  Lu's experiences as a Catholic are also relevant. Given the role of western involvement in China and Cold War politics, a minority church would not have beeen a priority. This painting was made in 1951, as Korea and China were drawn in almost as pawns in a wider geopolitical game.  For Lu, the experience of Mary and Joseph, persecuted, was only too real. 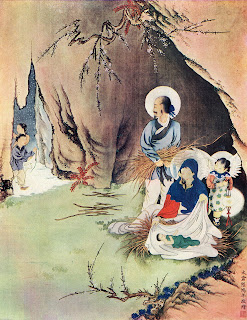 At this time of year, so many people think in terms of material excess. Rituals observed through gritted teeth, with everyone pretending to be happy for the camera. And some, alas, would turn Mary and Jesus away if they turned up seeking shelter.  remeberthe smash hit "Feed the world at Christmas" and the truly offensive chorus "Don't they know it's Christmas time?" As if the whole world was white and middle class and money replaced genuine compassion.  The rest of world does not exist to reinforce pernicious ideas of assumed superiority.  One year a charity called at my door. "I've already given", I said, telling the truth. "Well in that case, I DON'T wish you a happy Christmas" said the "Christian", in front of her kids and mine. That's why I make a point of supporting non west centric causes which all year round emphasize working with communities in their own society, supplying water, health, education so people don't have to become refugees in the first place.