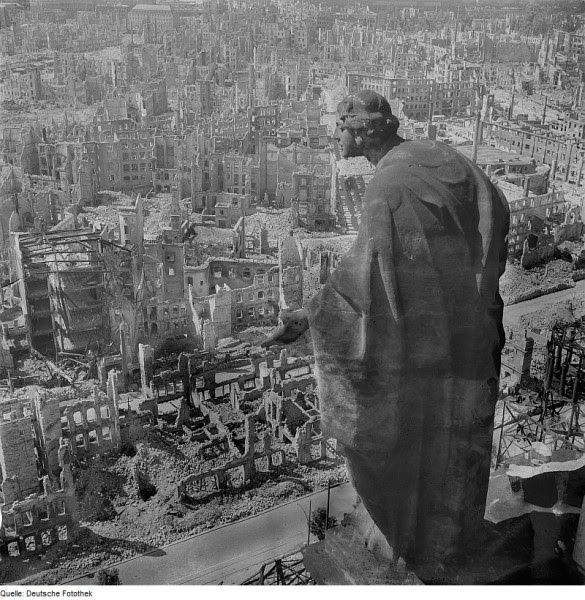 Rudolf Mauersberger's Weihnachtszyklus first performed 15th December 1944.with the Dresdner Kreuzchor. Two months later, Dresden would be destroyed by British and American firebombs, flattening the historic old quarter of the city, one of the treasures of German culture.  Coventry doesn't compare. The boys of the Kreuzchor hid for shelter in a dark cellar nearby, not knowing what was going on outside, or if their families were safe. Mauersberger, their choirmaster, calmed them down by making them sing songs of faith. Can hymns have been quite so fervent, out of the mouths of children?

Mauersberger's Weihnachtszyklus is beautiful bercause it celebrates Christmas from the perspective of children. It's not yet another telling of the Bible story, which the choristers sang about all year round. Instead, it describes the Dresden Striezelmarkt, or Christmas fair, and the simple folk toys that children marvelled at before Christmas was commercialized. We can hear bells, cuckoo calls,  and rhythms suggesting the movement of mechanical toys. The choristers sing with real enthusiasm, all the more touching because many of these boys, one of whom is Peter Schreier,  had been huddled together as the bombs fell around them four years earlier.

Perhaps Mauersberger's Weihnachtszyklus fell out of favour in the DDR because it was a raw reminder of the war, and of lost innocence, but I think that is exactly why it should become part of the Christmas repertoire not only in Germany but elsewhere. Do watch the video, published by a Dresdner Kreuzchor source, because it includes photos from their archives, not seen otherwise. Every British youth choir "needs" to hear this.