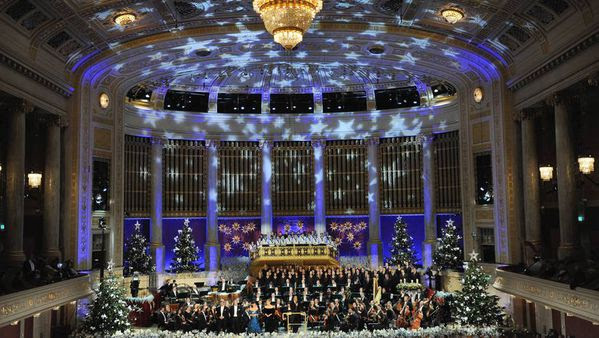 Angelika Kirchschlager, Ursula Langmayr (replacing Anna Prohaska), Luca Pisaroni and Joel Prieto in this year's Wiener Konzerthaus "Christmas in Vienna" broadcast (link here). This annual concert is a treasure because it's a complete antithesis to the formal stodge we normally get at Xmas, and also refreshingly different to the famous Neujahrskonzerts at the Goldenersaal at the Musikverein. You can also tell, by the number of women and blacks on the platform that it's the ORF Radio Symphonieorchester Wien not the Wiener Philharmoniker. The audience turns up in normal clothes, just as the shepherds turned up at the stable in Bethlehem.

The opening shots show the soloists and conductor Erwin Ortner put gifts under a simple Xmas tree,  while the boys of the Wiener Sängerknaben pretend to snatch them away. Of course it's staged - but it's good humoured and full of charm.  Musical values, though, are extremely strong. Bright trumpets announce Adeste Fidelis, soloists, choir and orchestra celebrating together.

Angelika Kirchschlager is in her element. She always sings beautifully, but here she seems much more relaxed and spontaneous than she might be in a more pressurized recital. Maybe her children are listening, and she knows it.  When she and Luca Pisaroni sang Englebert Humperdinck Weihnachten, they gave the simple song the human, personal warmth it needs. The voices of the Wiener Sängerknaben rang out like angels as they stood in the golden balcony above the choir and orchestra.

Glorious Bach, of course, (nice trumpet) but also Ariel Ramirez "Gloria" from Missa Criolla (12964) which combines South American folk instruments with conventional orchestra and singers. The folk musicians wear red ponchos - quite a showpiece - and Prieto sang with them in the small upper stage balcony. The piece suited Prieto well, and he sang with concentrated focus.  Pisaroni and Kirchschlager showed the comic side of their talents with "Baby, it's cold outside". They were classy, and stylish. Prieto and Langmayr duetted with "Let it snow". Neither can sing in English, but it didn't matter, they conveyed the mood. Then, Vienna's own contribution to the Christmas repertoire, Franz Xaver Gruber's Stille Nacht, Heilige Nacht. Magical ! Watch it again HERE.

Earlier today on Arte TV, a version of Monteverdi Poppea. Not the full Monty, but Rock Baroque. The very fact that European rockers can engage with Monteverdi is quite something. Anglo rednecks, I suspect, would sneer at the very thought. It wasn't my thing but it was good to hear that these musicians were prepared to engage with new/old ideas and create anew. More than can be said for many who think they know better. Later tonight, Marc Minkowski conducts Berlioz - should worth staying up for.