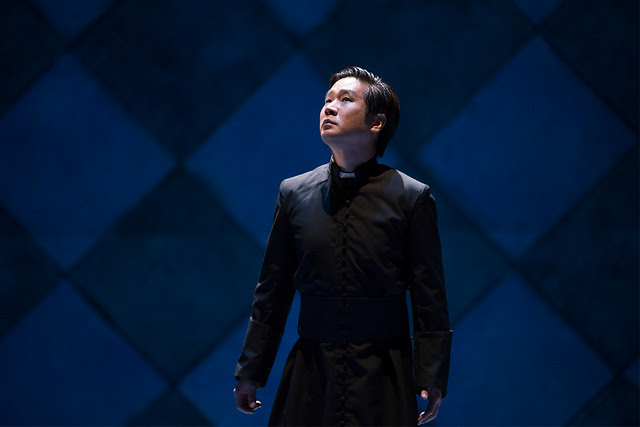 Jette Parker Young Artists at the Royal Opera House are always among the best but Jihoon Kim is unique. Get to his lunchtime recital on Monday 9th in the Paul Hamlyn Hall to hear why. Tickets here,  Kim has presence, he's the Young Artist Principal and gets higher-profile roles. On the HD broadcast of Verdi Les vêêpres sicilennes, I noticed how often Stefan Herheim used Kim at many critical points in the drama, far more often than the actual singing part required. Kim sang Robert, a French soldier, but appeared many times in close-ups because he has presence. He can sing with authority but also project individual personality.

"As one would expect at Covent Garden, all of the minor roles were polished and poised, but I particularly enjoyed Jihoon Kim as Robert. This promising young singer is a Jette Parker Principal artist, and ROH is right to place such confidence in him and to nurture a performer of such accomplishment and real individuality. His rolling, dark bass surely has a bright future."  wrote Jim Sohre in Opera Today about Verdi Les vêpres sicileinnes. (read more here and here)

The Monday recital is special because Kim is performing classical Korean music with a speciually chosen ensemble of Korean music specialists. In this recital Kim is going to sing every song with piano (Jean-Paul Pruna) and for some songs will add the traditional Koran instruments. "Some of the songs are composed as western style and some are traditional Korean music adapted for western Opera technique. So the audience can feel the Korean rhythm, Korean melody and Korean scales from the songs" he adds, "The audience should be able to see and feel what we are singing about. The traditional way to sing and Operatic style is totally different so I want the audience to know exactly what is going on without changing to much".

Have you ever noticed how many Koreans get into world-class orchestras and opera houses? That's because music education standards are extremely high. Classical music is taken seriously. Children learn music along with reading, writing and arithmetic. They develop good ears. Talented people get opportunities and respect.

But Koreans also take their own classical tradition very seriously. There is a system of "Cultural Treasures" where various art forms are designated special heritage status. Artists are given support and privileges, so their skills will be handed on to future generations. There's a similar "National Treasure" programme in Japan but nothing like it in the West.

Kim has assembled a group of top Korean instrumental players, some of whom have come direct from Korea for the recital. They will be playing instruments like the Taegum, Haegeum, Kkwaenggwari,  Buk, Janggu, and Jing. If you don't know what these are, this is your opportunity to find out and hear top-class trained Korean classicists play them well. All will be wearing traditional costume.

Kim's hanbok will be a spectacular silk costume, made by Somssimyoungga, the only luxury traditional company designing bespoke Korean garments. This will in itself be a work of art. Look at their website !

This is an extremely enterprising venture, as not many singers trained in Western classical style are educated in traditional forms. Listen out for the unique phrasing, rhythms and techniques of non-Western music.

Although there's a lot of ersatz Asian music around, this will be the real thing, so don't miss the opportunity. The influence of non-Western music on Western music is shamefully underestimated. Debussy, Ravel, Messiaen and Britten developed their styles from Japanese asnd Indonesian music in particular. Korean instruments are different to Chinese and Japanese instruments (some of which I've written about on this site). This is a whole new sound world, not to be missed. When I was a student, one of the visiting fellows was a member of the Japanese Imperial Household, seriously big deal. He had an entourage. He was an economist, but one evening, he gave a recital of unaccompanied ritual song. The Japanese students listened in awe because that music is never heard outside court circles. (it was OK to do it in a private party in Oxford). I've never heard anything like that since, and have never forgotten. So get to the Paul Hamlyn Hall on Monday : and learn. Composers especially - imagine the possibilities!

More if you're interested :
The story of Arirang, The Sheng and the Sho, Quqin Master and many others under labels like unusual instruments,  Chinese music, Chinese opera and individual composers (seee list at right) This is one of the few genuinely multicultural sites on the web