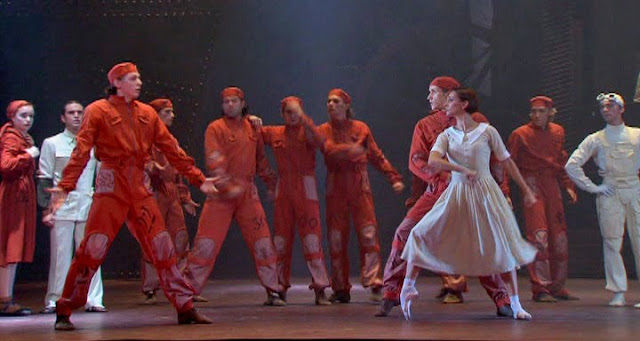 At last online, Dimitri Shostakovich's "lost" ballet Bolt , the famous Bolshoi production choreographed  by Alexei Ratmansky. The premiere in 1931 was greeted with vociferous opposition, and the ballet remained unknown until a complete edition was prepared for Gennady Rozhdestvensky to conduct in 1995.
Bolt, Shostakovich's op 27a, is scored in eight movements, allowing the ballet to develop over a series of vignettes. Ostensibly, the ballet praises the discipline of a totalitarian state. Like soldiers, workers and athletes operate in well drilled formation like parts of a machine. Ratmansky adapts this to his choreography. The dancers move in tight units, their limbs jerking rhythmically like robots. In the second scene, the workers are exercising in a yard before starting work. A bureaucrat shouts "one, two, three, four" and their bodies obey. Viewed from above, the camera shows what the Bureaucrat sees - a neat, obedient ensemble. Close up (from the workers' level) we notice that one dancer gradually falls out of step. The music is lyrical, but in a mindlessly simplistic way, like folk song adapted as propaganda.  Sour trombones announce something more mysterious.  Swan Lake satirized?  The Rebel and shy girlfriend enact a tentative courtship, interrupted  by strident, violent brass and a formation of workers in red uniforms who obediently writhe in mechanical gestures as the men in white suits (the bureaucrats) beam with joy. Then, dancers in white uniforms. Have the inmates absorbed the values of the system? On cue, they shout slogans. Notice the stylized propaganda gestures - arms thrust upwards, earnest expressions.

The "hero" Koelkov relaxes with friends in a bar. Lovely opportunities for solo dancers to show their individual "personalities". The music seduces - jazz-like riffs, languid woodwinds. Femme fatale with gypsy roses in her hair looks on as Girlfriend in white enters, aghast. A bar room fight, and a thief.  Do, lowlifes believe "Property is Theft"?  A bolt is quietly produced. Then a magical interlude where the stage is dark, and lights shine like stars. The Bolt is thrown into the machine  Red smoke pours out as the dancers jerk and leap. The lights turn out to be searchlights, as in a prison yard, and the walls move into action. Night descends again, and out of the darkness, athletes appear dancing in bright costumes. Then, wonderful contraptions that look like battleships, complete with fake waves. Inside, a dancer, his or her movements constrained by the complex fusellage they have to carry. Everything in order, right.  Girlfriend dances to maniacally cheerful music., but her movements are violent. Madder still, a xylophone solo with rude trombone raspberries. When the Apotheosis comes, the stage is bathed in golden light. Trumpets announce the New Machine. The Red workers return, even more dehumanized in plastic suits with gas masks, dance a grotesque formation and head off on scooters. Are we in hell, and are the red workers demons? Whatever the first production might have looked like, that first audience must have realized how subversive the ballet really is, despite the "triumphant" finale., straight out of a totalitarian  state celebration. Perhaps the premiere audience got the irony and were disturbed.

Also watch the documentary here Bolt, avant garde kitsch which puts the ballet into context, connecting it to radical film and theatre of the period. Bolt was Ratmansky's first big success before he emigrated to the US. Will Bolt be done again at the Bolshoi  Will Ratmansky work again at this level, and in Russia?  Who knows? Perhaps it's the nature of good art to unsettle rather than to soothe. In 2006, the Marrinsky came to the Coliseum in London with four ambitious programmes - The Nose, conducted by Gergiev, a different version of Lady Macbeth of Mtensk, and a trimmed down version of Shostakovich's The Golden Age which deals with a similar theme of athletes in a Soviet system. Gergiev didn't conduct and the piece sounded a mess, nothing like the outstandingly vivid recording of the complete ballet, conducted by José Serebrier.  Get it HERE. I'll write about that later when I have more time, because it's a good companion to  Bolt. The Golden Age is better as music, but Bolt is tighter in dramatic terms.
at December 28, 2013