Merry Widow no more : Martha Eggerth died yesterday aged 101. Eggerth and her husband Jan Kiepura were the stars of Central European musicals and operetta from the 1920's onwards. Hear them sing Usta milczą (The Merry Widow) HERE. Affectionate warmth from him, gorgeously elaborate coloratura from her, and then they sing together cheerfully as she decorates the lines with manic trills. That good natured happiness was their trademark : it still shines today. 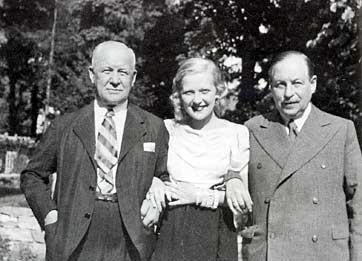 Born in Hungary before the First World War, Marta Eggerth was a megastar in 1930's operetta and musicals.  She appeared in Emmerich (Imre) Kálmán's Czardasfurstin, or Die Herzogin von Chicago  (read my review here).  She also know Franz Lehar, Robert Stolz and many others. In this photo, she's with Kalman and Lehar.  In 1936, she married the tenor Jan Kiepura and together they went on to even greater success. He was the Pavarotti and Domingo of his time, and more, ansd she the fairy-tale like symbol of beauty. Kiepura and Eggerth are also important to us now because they were artists who moved  freely between genres. No viciousness then about "crossover". Today they'd be pilloried  by media trolls. Thank goodness their work can still give us pleasure today ! In this article from the Washington Post, she talks about her life in the US. "I live in the present", she says.  Please also see my post from 2.12, "Bittersweet Polish Valentine" about the concert she and Kiepura gave on his return to Kraków in 1958. He was so popular that crowds gathered around the couple, welcoming them. Kiepura jumped onto a car and sang, impromptu. The article also contains a very rare link (off air) to the broadcast he gave on Polish radio at that time. Kiepura sing the Noel Coward song "Bittersweet", and Kiepura explains the text to the audience, who had not been able to hear English cabaret for many years.
at December 27, 2013