Any new production of Wagner's Parsifal would be welcome, if only to banish memories of Klaus Michael Gruber's staging from the 1990's where the Knights of the Grail were so comatose they had to be wheeled across the stage on a conveyor belt. But the Knights wore Knight suits and it was a "traditional" production so no-one dared demur.  I'm glad that I went to this new Parsifal at the Royal Opera House, even though my initial misgivings weren't far off the mark. Aft6er watching the HD, I['ve cjhanged my minsd ona lot of things ! read my latest here.

Antonio Pappano saved the day. Parsifal seems to have unleashed something in him. He's not an idiomatic Wagner conductor, but he knows what turns abstract music into drama. The notes, of course, are the same, but he intensifies colours so they seem to shimmer, taking on invisble extra richness. The music seems to exist as a living organism, the Grail Made Real. Bernard Haitink's final performance of the Gruber Parsifal stretched tempi to the point of disintegration, Pappano's approach isn't faster so much as more visceral, and well, red-blooded. We don't see Amfortas fight Klingsor, but the music suggests titanic struggle, and a panorama of cosmic extremes. Pappano feels the emotional pull so instinctively that he imparts his enthusiasm to the orchestra, and to us. Wagner as Verdi, perhaps? The better the music, the more interpretations it generates.

Jonas Kaufmann's Parsifal (more here) was miraculous : no-one else comes close. Parsifal comes from nowhere and finds his identity by struggling with himself. In that sense, Simon O'Neill's Parsifal worked. There are three Parsifals in Parsifal, each at a different stage of spiritual development. As the young Parsifal, O'Neill's harsh metallic tone suggests steel being forged by fire. Parsifal embodies the spirit of the Spear. O'Neill's best moments come in his encounter with Kundry, when the hero finds himself, and the singer's strengths reveal themselves in moments of gleaming power. O'Neill's voice is so individual that it's  difficult to cast. His Siegmunds are good, but he's not a natural Parsifal version 3, where the character emerges into transcendant light, becoming a Jesus substitute. Becuase this new staging underplays the transformation, it sidelines the singer - any singer - reducing the pressure on him to shine.

When I last heard Parsifal , in August (see here), John Tomlinson sang Gurnemanz, or rather acted his way through the part, his experience informing the performance though the voice was tired. This time, René Pape sang the part, bringing out its urbane elegance.  Gurnemanz is one of Nature's aristocrats. Amfortas screws up: Gurnemanz survives to tell the tale.  Pape sang the long first act monologue with elegant poise - beautifully shaped phrasing that shaped the long text into music, rather than words alone. This time, the staging let him down. While it's true that Gurnemanz doesn't do direct action, here he was relegated to the sidelines, barely distinguishable  even in the orchestra stalls. I tracked him with my ears.

Angela Denoke's experience as Kundry stood her in good stead, for here the character seemed woefully under-directed. Denoke hits her notes like arrows aimed at targets. Perhaps this connects to Parsifal shooting the swan, but that's almost certainly far too esoteric for a production as simplistic as this. A different production, with more emphasis on the way the role works as drama, would show Denoke in better form. 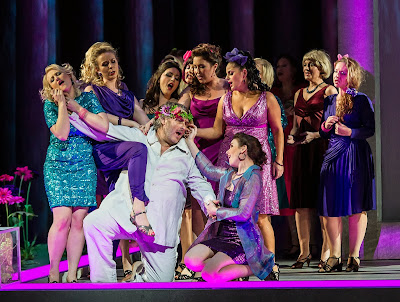 Gerald Finley's voice has been through rough patches, but now seems to have settled well. His Amfortas was lucid: nice rich tones, a king rather than a man dying  slowly from wounds that cannot heal. Again a case of good singing, without direction.  When Robert Lloyd sang Titurel, it came as a shock. An extremely loud and sudden outburst, far too forceful for the role. Perhaps Titurel hates Amfortas for denying him the Grail, but it goes against the musical line. Willard White sang Klingsor, who has existed, like a dark angel from the beginning of Time. Audiences love famous names. White's Klingsor delivered enough to appeal, but sounded tired. Fresh. lively singing from the Flower Maidens , especially the one in the pink shift, who might be Celine Byrne. O'Neill looked very happy with them, and so he should, they were so vivacious that they almost stole the show.

This year, The Royal Opera House brought Stefan Herheim, at last, to London. His Verdi Les vêpres siciliennes (more here) was, like his other work, exceptionally erudite and well conceived, growing in stature with each new encounter. It would have been too much to expect another Parsifal from him while his Bayreuth Parsifal is still so fresh, but he's not the only good Wagner director around. Perhaps Stephen Langridge was chosen because he's so very different to Herheim. Previously, I've only seen his staging of Harrison Birtwistle's The Minotaur.(much more on that on this site)., so I had a completely open mind.

Langridge dispenses with the pseudo-religious claptrap that bedevils Parsifal and distorts its true meaning, whatever that might be. Titurel, Klingsor and Kundry are figments of the imagination. The Knights make a fetish of the grail, imbuing it with supernatural  powers. For them Good Friday has similar magical qualities. Yet Good Friday is the one day in the Christian calender when bread isn't turned into the body of Christ. Read my piece on Religion vs Religiosity in Parsifal – Wagner subverts Christian theology so thoroughly that Parsifal could be read as blasphemy.

Susan Chitty's set is dominated by a large box-like structure. It's an extremely effective device for bringing together different planes of action neatly on stage. It also serves as a metaphor for the Knights' Grail fetish. The box is empty! Instead a young boy emerges, semi-naked as if coming out of a sauna, not that we should be too specific about images. There's even steam. As a concept this is perfectly valid, because material objects like a physical Grail don't confer spirituality. A squeaky-clean boy is a perfectly good symbol of a pure, Holy Fool. In the Final Act the boy comes back older but by this stage he's served his purpose, just as Freia drops out of the Ring. The Gods of Valhalla won't die without their fix of golden apples, unless, like Titurel, they're so hung up on ritual that they can't live without it...Compassion isn't a material object.

That insight redeems Langridge's Parsifal.  Otherwise, the production is pretty static, and the characters underdeveloped. It will be very successful, though, for precisely that reason. Audiences seem to prefer one-dimensional productions where they don't have to engage with complicated ideas. They scream at the word "Regie" as if it were a fetish like the Grail. It does not carry the connotations of "regimentation"  that scares people who speak only English.  All the word means, and it's the same in French, is "directed", pure and simple So all the hysteria about "Regie" is a meaningless crock. There are good productions and bad, but that depends on what's in them  Those who really care about opera are, one hopes, mature enough to get something out of many different approaches. Productions which ignore depth of interpretation, like Warner's Eugene Onegin  or the painfully shallow ENO Wozzeck are the real "Regie" villains because they ignore the real depth and complexity in a good opera.

That said, though, Langridge's Parsifal is a good show. because it at least attempts to deal with the ideas. It's infinitely better than the Met Parsifal, stage-wise, with its overstated blood fetish.  Without the Met's classy cast, that production belonged in a minor provincial house, though it might have seemed radical to Met audiences. Langridge's Parsifal will, like the hero, grow and mature, especially if he fixes the characters. Give me real "Regie"like Herheim any time :