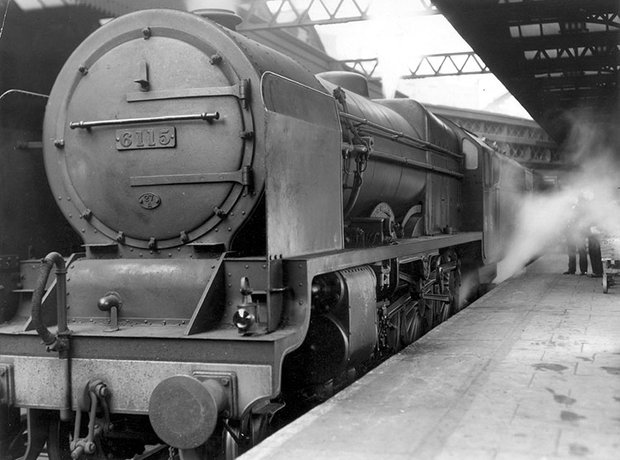 Available now on BFI player, Night Mail, the pioneering documentary produced by the General Post Office film unit released in February 1936.  It's fairly unique, a factual documentary about train services,but it's lifted out of this into the realm of art, by its sensitivity to the subject. Real railwaymen and postal workers, not actors : nothing faked. It's an idea that connects back to the futurism of the 1920's and 1930's and even further back to to William Morris's concepts ideas of art and socialism as continuum.  Mail sorters are seen putting letters into pigeonholes : repetitive rythmic movements which streamline the process, their movements almost balletic.  Then, look at the trains themselves - engines puffing, pistons moving, travelling in orderly, organized lines across the country.  Much more than mundane mechanical process ! Even the sound of steam rushing through the chimneys and the banter of the workers sound like music. The Postal Special is so efficient that letters and parcels posted in one area can be sorted and bagged on the train within half an hour.  On this orderly efficiency, rests the prosperity of industrial Britain.  Night Mail was created to boost the morale of low paid workers, but also as public relations. On this orderly efficiency rests the prosperity of industrial Britain.

Night Mail is "industrial poetry" so it's perfectly apt that it should end with poetry and music.  W H Auden's poem captures the rhythms of  machines and men, working in unison, while opening out to the world beyond - letters of every kind, from all over the world, communicating human stories of every kind.  Th very young Benjamin Britten picked up on this context, his music replicating the lines of the text to brilliant effect.  Produced and directed by Harry Watt and  Basil Wright,  this film is also influenced by Alberto Cavalcanti who had made Rien que les heures (Nothing but time) - a day in the life of Paris, from 1926,  not unlike WaltervRuttman's Berlin : Symphony of a Great City (read more here). Very much in the spirit of futurism and creative modernity.  Sadly, some things don't change. Cavalcanti was poised to head the GPO film but was cut off as he wasn't British. He returned to his native Brazil, then returned to Europe, East Berlin and France.
at June 10, 2020